Catching up on a cloudy Sunday

I've had a cold for the last three days. Nice thing about a cold is I pretty much know what to expect in terms of how I'll feel. I've mostly sat in the recliner and worked on my computer, catching up. I also have a broken toe from having it stepped on this week.

Art's "health scare" is pretty much behind us. On Monday evening we went to the CCR class so we could give hugs to Melissa and Riley, the trainers who taught me the procedure I used. We were asked to tell our story again to the 127 people who showed up for the class. Just that afternoon Art and I had given talks at our "Reimagining God" group about our spiritual journeys. By the time we went to bed we were two tired, elderly rock stars!

I don't like having nothing to do, but I overdid it in recent weeks. Just this morning I finished off my last online class. At one point I was taking five at the same time, and that was too many. Now I am starting two more: negotiations/conflict resolution and art. They won't be as time consuming.

We got a home exchange offer for this summer from a family in Brittany, France. We usually get half a dozen or so offers and they are often places we've either been to or don't have an interest in. But this one was tempting. I wrote and said we were considering it and would let them know in a week. I checked airfares and even bought a copy of Rick Steves' book on France. But on Wednesday I wrote and told the family we wouldn't be able to do the exchange this year. It's because:
We also got an exchange offer from Budapest. That sounded tempting too. But we'll be home instead, tending to our garden and our family.
Posted by Linda Myers at 4:05 PM 15 comments:

Me and my MOOCs

Nope, not a typo. MOOC stands for Massive Open Online Course. I'm a lifelong learner, but I don't much like to drive to take classes. I have no need or wish to earn another degree.  I live in Arizona in the winter and I travel at other times of the year.  So MOOCs work for me. I just discovered them and so far I'm very glad. I take the classes for no credit and they are free.

Here's what Wikipedia has to say:

A Massive Open Online Course (MOOC) is an online course aimed at unlimited participation and open access via the web. In addition to traditional course materials such as videos, readings, and problem sets, MOOCs provide interactive user fora that help build a community for students, professors, and teaching assistants (TAs). MOOCs are a recent development in distance education.

In the last three months I have taken the following four-week classes:

From Open2Study:
I am finishing up Your Body in the World today. Tomorrow I start two new classes:
I have found the Open2Study courses to be at a comfortable level for me. I overscheduled myself, though, and got stressed out. Two classes at a time is better than five!

From Coursera:
When I take another offering from Coursera, I will take just one class. I want to learn about human physiology in more detail, but I know it will be time consuming.

There are lots of websites offering MOOC courses, in a wide variety of subjects. A good place to start looking is www.mooc-list.com.

A woman in my water aerobics class writes for a magazine read by RVers. Yesterday she interviewed me about the classes I take via MOOC. They're a great activity for people on the move!

My band of angels

Looking back on the two weeks since Art's "health scare" we feel exceptionally fortunate. Through the most stressful time, friends in Arizona and Washington as well as family supported us. Art went to a local doctor on Monday and was pronounced doing well and very lucky to have a wife who knows CPR. His blood pressure meds are still being adjusted, since he was taken off the diuretic that likely contributed to his low potassium level, and he will have one return visit in six weeks, just before we leave for Sedona and home. On Tuesday he visited the pacemaker clinic. The tech reviewed  his readings over the previous week, since he'd left the hospital, and found no heart irregularities. Art was cleared to remove his sling, drive, bicycle and pursue his ordinary activities while he "takes it easy" for the next six weeks. No cardiology appointment was needed. Amazing!

Yesterday the first notification arrived from our HMO in Washington. The semi-private room is covered. Hopefully so are the ambulance, the ER, the ICU, the angiogram, the echocardiogram, the multiple EKGs and blood draws, and the procedure to insert the pacemaker/defibrillator. I guess we'll get a bunch of "okay, we'll cover this" forms over the next few weeks. How wonderful to have insurance.

Last weekend I wrote a note and left it on the door of the fifth wheel where Scott lives. He's the fellow who applied the AED to Art. I asked him to give me a call to fill me in on details I've forgotten about what happened. I haven't heard from him. That's probably just as well. We need to move on rather than continuously looking back on those minutes of our lives.

Art's daughter Melissa drove from San Diego this weekend for a visit, and his daughter Laura flew in from New Jersey. They wanted to check out their dad's condition for themselves. One day we went to the Southwest Desert Museum... 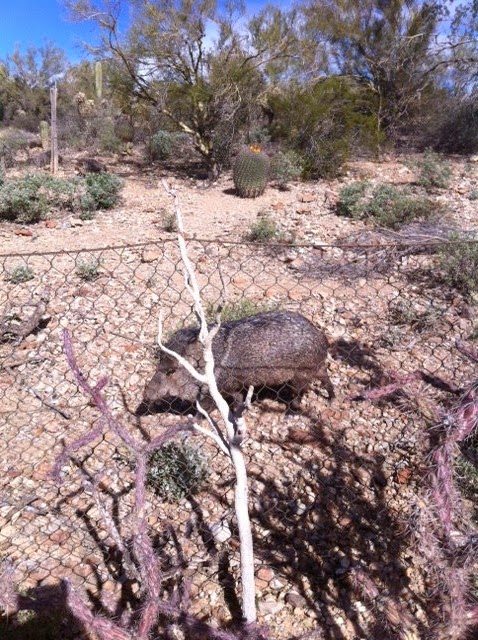 This is a javelina - looks like a pig but is actually a peccary. We see them in Arizona in the wild as well as at the Southwest Desert museum.

...and the next we walked and ran in Sabino Canyon. Actually, Art and I took the tram to the top and walked halfway down, caught the tram back up to the top and rode it down. Mel and Laura ran to the top and back. They arrived back at the car well before we did. 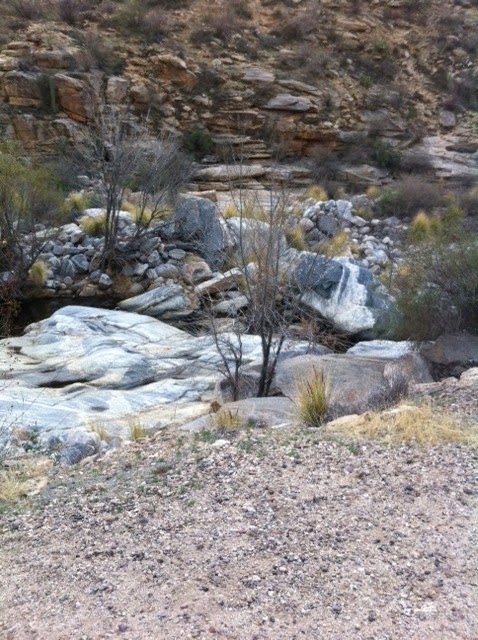 Each of these daughters lived with us when they were going to school years ago. I have known them both for over 20 years. They are like my own. Such a fine time we had in the Arizona sun!

We have been participating in a Monday group called "Reimagining God". It's a spiritual exploration of sorts. Today we went to a progressive Methodist church we attended once last month. The guest speaker was an Islamic imam from Seattle, and we stayed for discussion afterward. We look for the spiritual similarities rather than the religious differences. I've been saying for a couple of years now that we are all in this together, and the explorations and events of this winter are confirming that.

I think about my friends in Seattle and elsewhere. I am in touch by email, phone and Facebook. I see my friends in Tucson often, since most of them are less than a five-minute walk from our little home. I feel surrounded by my band of angels.
Posted by Linda Myers at 6:36 PM 18 comments:

Art was discharged from the University of Arizona Medical Center on Tuesday, after three days of evaluation and monitoring. His arteries are clear and his heart is healthy. He now has a pacemaker/ICD (implantable cardioverter defibrillator) to handle any future electrical issues. We think the episode was triggered by extremely low potassium levels. He's wearing a sling to remind him to keep his shoulder immobile until the incision heals. We hope it will come off on Tuesday when he has his first appointment with the pacemaker people. Then we will get back on our bicycles.

I am usually compliant with medical recommendations, and Art is sometimes not. I am relieved that he has not decided he can drive; he has an early morning meeting every day and has found rides to them all so I can sleep. He has not, however, decided to refrain from drinking coffee. I keep reminding myself that each person has a right to decide on his own quality of life. It is very hard for me to keep my mouth shut.

We went to a dance last night. It had been a week since Art got any kind of exercise and he got a little out of breath. He said he was fine - that the shortness of breath he experienced before he collapsed isn't the same thing as being out of breath. Still, I got paranoid. I told my friend Judy, a nurse, and she didn't say, "He should sit down and rest." She said, "You'll get over your paranoia."!

I called the woman who coordinates the CPR classes at the resort (it's actually called CCP, or Continuous Chest Compression, as the method has changed since I first took CPR decades ago). I told her I'd be interested in speaking at the resort and elsewhere about the importance of learning the technique.

So yesterday Art and I spoke to 300 people at the monthly coffee and doughnuts gathering. The meeting was broadcast via closed-circuit TV all over the resort. Art said, "My name is Art Myers. Last Saturday I was playing pickleball with my wife - and I was winning, 10-8 - when I got short of breath and dizzy. I went to sit down on the sideline. Then I died." He handed the microphone to me and I told the story. My concluding sentence was, "I am pleading with you to take the class. You never know when you might need to save a life." We'll see how attendance goes at the next class a couple of weeks from now.

The coordinator also sent our names and our story to the public health person in Tucson. I said I would be willing to speak any time until we leave here on March 22.

We have had wonderful support from family and friends, both here and at home. I had rides to and from the hospital every day (I lost my glasses that Saturday, and I have terrible night vision), visitors at the hospital, emails and text messages and phone calls - even a casserole! People stop us in the resort to ask how we're doing.

On the inside, I am still stressed. I have done some laughing, but no crying yet. I wonder if that will happen.
Posted by Linda Myers at 11:08 AM 14 comments: