I'm sitting in the living room of our Airbnb place in Chalkida, Greece. The air conditioning is having some effect after half an hour of intense labor. My travel companions have driven to the Athens airport to pick up a piece of late-arriving luggage. It is nice and quiet here.

Our day was long, beginning in Athens with an 8:30 meetup and pickup of our rental car and a 90-minute drive to Chalkida, very pretty. We met our host, Frank, who showed us how everything worked and then led us to what he thought was "our" refugee camp. Turned out he took us to Ritsona, the Syrian refugee camp that's gotten a lot of publicity in the American press. When the staff there told us we were in the wrong camp, we wandered around for another half hour until we found it.

The Oinofyta camp is on military property - as I found out the other Greek camps are. It houses about 700 refugees, mostly Afghani with a few Iranians. An old warehouse has been subdivided into one-family rooms, and that is supplemented by tents. The residents are provided with meals and water and toilet and shower facilities. There's a warehouse full of donations from around the world. Today we worked from 1:00  to 5:00 distributing clothes, shoes, and blankets. There are about ten volunteers this week: five from Spain, one from the UK, one from Hong Kong and the three of us. The volunteers have been there varying amounts of time; we were brought up to speed by the immersion method. We are fed lunch and dinner.

It was hot today; weather in the 90s, but we were indoors most of the time rather than in direct sun. The heat was easier to tolerate than I had expected.

The residents were mostly middle- or upper-middle class when they left Afghanistan.

The camp received a "donation " of 2,000 blankets today; in return, the NGO (DoYourPart.org) will pay to have electricity installed in its containerized office. Tomorrow, the residents will be asked to dig a ditch to lay wire to the computer center; in return, they'll have access to the online Skype application to turn in the paperwork for their asylum request. Afghanis are not considered war refugees, so they are not eligible for residence in the EU. They either need to be accepted into Greece, or sent home. Numerous residents of the camp decide to pay smugglers to get them across the borders of other southern European countries. The success rate is low, but the refugees are desperate.

I'm in learning mode, as usual. We were busy today, and I am tired but not exhausted. It surprised me that one good night's sleep last night in Athens appears to have caught me up. I don't have any sense of jet lag today.

Getting antsy to leave for Greece

Next Saturday I fly from Seattle to Paris, where I am meeting up with Jenean, an old friend, and her niece Savannah. We will fly to Athens together. After a night of sleep, we will report to Oinofyta, where there's a refugee camp we'll be volunteering at for a week.

I've learned to prepare slowly for travel rather than waiting until the last minute. So I'm just about done except for the packing, which I'll do Saturday morning before my flight.

Here's what I've gathered this week:


I got my hair cut three weeks ago. On Tuesday I am having it cut again. It will be humid, and I have curly hair, so the shorter the better.

I've had my phone unlocked and will buy a Greek SIM card so I can keep in contact with the people there. I'm also taking my laptop so I can email and blog.

I will be packing light. Jenean and Savvy and I have rented an apartment through Airbnb and will have laundry facilities. Our lives will be much easier than those of the people at the camp.

I won't have much time to catch up on sleep and time zones. My current plan is to stay up very late on Friday night - like 4 a.m. Then sleep for three or four hours. Then pack and go to the airport. About halfway through the flight I'll take melatonin. If I can sleep for four hours on the plane, I should be fine during the layover and ready to sleep again when we get to Athens.

That's just the current plan, though. Anything could happen between now and Friday night.

I wish it were Friday already! I feel blessed to be able to do this.

Chautauqua and me - the Bag Lady reflects

When I quit my last job six years ago, I had three goals for the first year:
I have mediated about seventy times as a volunteer in the last three and a half years. I still love it. But I want to do more.

In September of 2015 my husband Art and I took a trip to Eastern Europe. We were in Budapest at the same time as the first tide of Syrian refugees arrived at the train station there. Five days later, taking the train from Lake Bled (Slovenia) to Munich for our flight home, our train was stopped and service cancelled in Salzburg because refugees were walking on the tracks to get into Germany. We left the train and spent a couple of hours in the Salzburg train station, looking for alternate ways to get to Munich. In that train station were several hundred refugees, standing and sitting on the floor. They wanted to find a new place to live. I spoke very briefly to two women, to wish them luck.

When we got home, I could not get those refugees out of my mind.

Then, in October 2015, I spent five days on Vashon Island, near Seattle, with five other writers in a workshop. Our last activity was a ten-minute write on the famous last line of Mary Oliver's poem, "The Summer Day": "What is it you plan to do with your one wild and precious life?"


Here's what I wrote:

I plan to say yes. To whatever comes along, especially if it's unexpected. I've said this often recently: I'm standing in an open field, forest all around me. I'm waiting, with my arms stretched up and out, for what it is I am supposed to be. Not do. Be.

I have at my feet all my gifts: intelligence, articulate expression in the spoken and written word, the ability to listen with sensitivity and care, a passion for creating understanding between and among. At this point I have no idea how that will turn out. Who will enter the clearing? Will they arrive on two legs or four or none? Will they be visible or just a spirit or essence? I am sure I will recognize their arrival quite quickly, regardless of their form.

Most of my bucket list items have been crossed off. What's left, I think, are the intangibles; what I don't yet recognize should be on that list. Three opportunities have arisen this year, all related to connectedness in different arenas. So far, I am still saying yes, knowing I'm on a right path.

Who am I to know what it is I'm supposed to do? What will the yesses to come be about? "We are all in this together" has been my mantra for a while now. Who are we, and what is together? I have to keep saying yes. That's the only way I'll know.

In March of this year a friend from my faith community invited me to Chautauqua. I had heard about it for years but had never gone. I said yes and sent my money for the week of July 31 - August 6.

And in April of this year I found out that an old friend was going to volunteer in August at a refugee camp in Greece. I asked if I could go with her - before I even thought about it - and she said yes, and I cashed in 60,000 frequent flyer miles for Seattle to Paris to Athens and back.

I saw Chautauqua and Greece as separate trips, unrelated except for my anticipated enjoyment of each of them.

Then, last week, I went to Chautauqua.

Each summer, the Chautauqua Institute presents eight weeklong sessions centering around a theme. Week 6 this year, which I attended, was on "The Future of Cities". Lectures by experts in the sacred and the secular on the theme, plus a myriad of other activities.

Plus culture: opera, symphony, dance, strings, a cappella musicians, percussion. Every night something, included in the cost of the weekly gate pass. I went to the ballet, the symphony, and a string group. It has been ages!

The Chautauqua campus looks like Disneyland for grownups - beautiful old homes along streets that were built before autos, fabulous gardens and old trees. People on foot everywhere. Kids riding bicycles, teenagers. People with canes and scooters. Men and women from all over the country  - mostly east coast, I think. I'd go to a couple of events and be so full up in my brain and my spirit that I'd need to take a break. 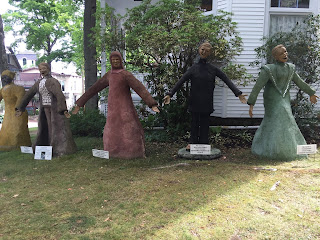 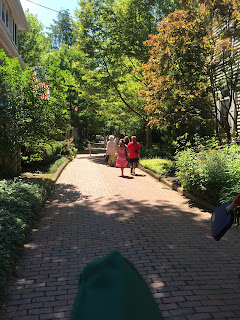 These signs reflect the spirit of the place. 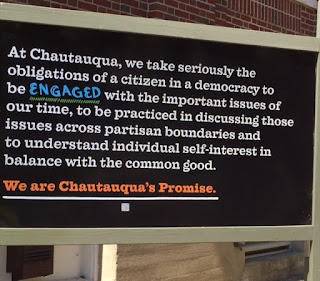 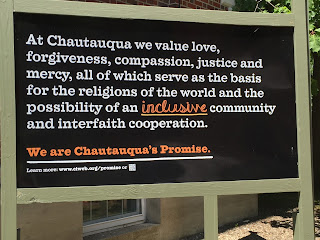 Each morning of the week I attended an interfaith service - very rare for me - presided over by Rev. John Philip Newell of Scotland, who is deeply influenced by Celtic spirituality. A morning lecture on some aspect of cities including David Simon of "The Wire" on police and the drug wars in Baltimore. An afternoon lecture on some aspect of religion in the cities including Reverend William Barber II, who electrified the DNC two weeks ago.

On Sunday, the first day, the incoming impressions and images were random, disconnected in my mind. By Friday, I'd had an experience of growth and synchronicity that I wouldn't have believed.

I saw that my experience at Chautauqua and my upcoming trip to Greece are inextricably connected. I would never have guessed. That saying "yes" to using my willingness and my talents are the right idea. That I am being led by something bigger than me.

Here's what I'll take with me to Greece from Chautauqua:

Last October I wrote, I'm standing in an open field, forest all around me. I'm waiting, with my arms stretched up and out, for what it is I am supposed to be. Not do. Be.

"Sometimes I need only to stand wherever I am to be blessed."