The Bag Lady has an Afghan friend

In 2016 and 2017 I volunteered at a refugee camp in Oinofyta, Greece.  The majority of the residents were Afghans. There were about 500 people living at first in tents and then in small rooms built within an abandoned chemical plant. Volunteers worked long days with Afghan families. 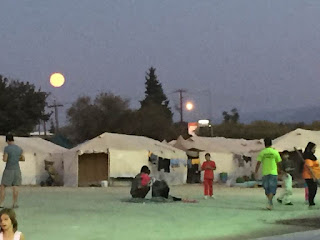 I made a few Afghan friends. When they moved on - to Switzerland or Germany or France - or settled in Greece - I kept track of them, mostly through Facebook.  I've also stayed in touch with some of the other volunteers. Most of these people are quite a bit younger than I am, and I like how that connection benefits us all.

I developed a bond with one of the Afghans. Nadim was a scientist in Herat, Afghanistan. His life was suddenly in danger, so he left his city the next night with his wife and four children. They endured the typical hardships of a refugee family and arrived at Oinofyta, where they stayed for over a year. They now live in Germany where they are safe. Nadim has been a good friend to me and has given me wise counsel on multiple occasions. And I have done the same for him. He calls me his American mother. We talk on Facetime every few months. He speaks fluent German now, and I tell him we need to talk more often because he will lose his English otherwise. He speaks Farsi at home and German in his community. He speaks English with me. 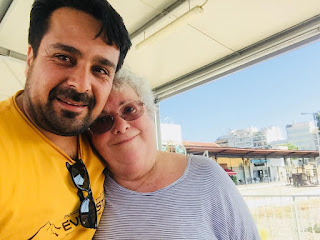 I participate in a Zoom meeting on current events on Wednesday afternoons. Everyone at the meeting lives - or has lived - at the Voyager RV Resort in Tucson, where we spend our winters. Right now we're in Arizona, Wisconsin, Pennsylvania, New York and Washington, but most of us will be back in Arizona within a month or so.

Back in August, when the Taliban swept through Afghanistan and the US withdrew in haste, the current events group had its discussion. I told the group about my friend Nadim, and I asked if they would be interested in having him join us for one meeting, so they could ask questions. It would be noon in Arizona and 9 pm in his German village. They were interested. So I asked Nadim if he'd be willing to do that. He said, "Yes, and I will ask my sister also. She is a Ph.D. scholar in Herat and her speciality is political science and diplomacy." I have learned to trust Nadim, so I said okay. He set up a Facebook group for the three of us.

When I had my first conversation last month with his sister Samira, she was living in Herat. One day she went to the market with her young son and on the way they saw a body hanging from a crane. She sent me a picture. I knew this was happening in Afghanistan, but seeing it in such an immediate way was jarring.

Two nights later Samira told me that she and her family had left Herat in the middle of the night. She'd been an activist and she'd gotten word that the Taliban was searching for her. The family was on the road for several days "in many cars and many buses" and crossed the border into Pakistan. At a hotel that night, they were robbed of all their possessions and their papers. She had made copies of the papers on her phone. She was distraught when she talked to me; she said if she'd known how bad it would be she would have stayed in Afghanistan. Within a couple of days, though, the family arrived in Islamabad and found lodging.

Samira wants to go to Germany or the US to live, where she and her family will be safe.

I spent some time with my friend Mr. Google, looking up the various ways people can be accepted in the United States. Here are the most promising paths for Samira:

I told Samira about these possibilities.
Samira is 33. She told me her dream was to be the first female president of Afghanistan by the time she was 40. I think anything is possible.
Today when I gave her the information about humanitarian parole, she said, "You are so kind." I said, "That is probably what the women you have helped say to you. Right?" She said, "Yes."
It amazes me how chains of circumstance link my life to so many others. I continue to believe that we are all in this together, and we are all the same.
Posted by Linda Myers at 8:43 PM 5 comments: