Getting to the boat

Our Road Scholar group left Reykjavik yesterday afternoon, taking a chartered Icelandair flight to meet our boat, the Ocean Diamond, in Kangerlussuaq. There's an airport there, but no town. I'm accustomed to getting myself to the airport, checking myself in and finding my gate. Instead, we followed our guide through the airport, obedient as fourth graders. Trust the process, I told myself. 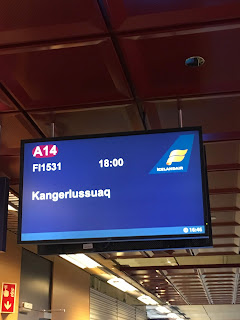 The plane landed. My travel companion Terra and I were seated near the back of the plan, so we were nearly the last to disembark. We descended the stairway, walked across the tarmac and entered the terminal building. None of our group members were in sight. An Ocean Diamond t-shirted person greeted us and said, "Get on a bus outside." I said, "What about our luggage?" They said, "It will be delivered to you."

Four buses waited in the parking lot to the rear of the terminal. We still did not see any of our group members. An Ocean Diamond person said, "You can get on the bus and they will come." At this point I was not trusting the process. What if everyone was still inside the terminal someplace, waiting for us?" Still, all the buses were going to the ship.

Our vehicle was an old yellow school bus with deteriorated stairs. And the road was bumpy for the whole 20-minute ride to the pier. There were some hills on the way, and I was reminded of the time years ago when we had six kids in a used motorhome going over the mountains. The engine overheated and we had to pull over to the side of the road until it cooled down. This time, though, the bus groaned over the top of the hill and descended to the water.

And there we found the rest of our group.

Our guide put on our life jackets for us. We waited until it was our turn to join another eight people to board a Zodiac, which would take us to the Ocean Diamond. 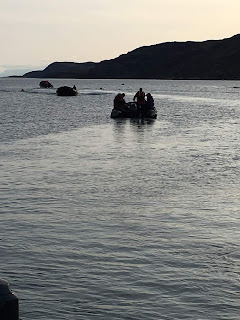 We were welcomed by the ship staff and it felt wonderful to be aboard at last. 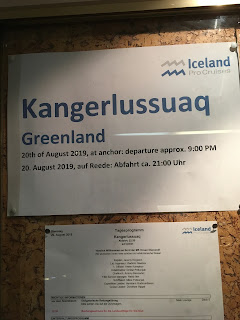 Flying away again - to Iceland and Greenland

I should have written this a few days ago, because we've been in Iceland for three days and we're leaving for Greenland today. Now I don't have time. But in Greenland I won't have access to the internet, so I'll be offline. Stay tuned. 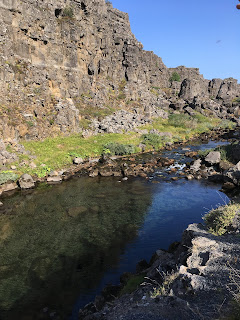 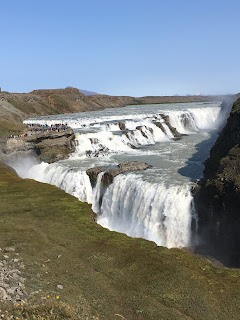 What I'm leaving behind

I quit my last paying job just about nine years ago. Here's what I've done since then:

I've always liked to be busy and to keep my mind engaged. That is still the case. But this summer I've shifted:
Here's what I AM doing at home:
Early next month we leave for Tucson, and we will be there for a year. It wasn't in our plan until Father's Day, when it came up in a phone conversation between Jason and Art. It just happened into our lives. That's actually how things usually work out for me, anyway. We've been considering a permanent move for several years - me more seriously than Art - but this year is a perfect time to see if it's what we want, without having to sell the house first.

Here's what I'm doing to prepare for Arizona:
The changes - what I'm leaving behind - are not sacrifices. They're more like evolutions. I'm not ripping myself away from home. I'm sliding into something new.
Posted by Linda Myers at 11:05 AM 14 comments: