"Just this minute the surgery scheduler called. Art’s surgery will be Friday, June 11, and the surgical consultation for my hip will be June 22. Life is good!"

That's the email message I sent to a friend who asked how we're doing. We've had a challenging couple of months. My husband has half a dozen pinched nerves in his 78-year-old back. One of them controls strength and movement in his right leg. Others appear to initiate sciatica. He's been pretty miserable. In Tucson, we live in a park model (trailer) and the doorways are too narrow for a walker or a wheelchair. So he had a few falls while transferring from the walker to the toilet, or from the walker to the bed. We have four stairs which he could descend with difficulty, but impossible to climb back up, even with several helpers. So we were looking forward to being back in Washington, with wider doorways and no stairs in our remodeled-last-summer apartment.

I decided to talk to our doctor once we got back to Washington. I said, "I know my left knee needs to be replaced. My back hurts, and my right hip aches. I think they're all related. Can we figure out how, and do something about it?" So the doc ordered x-rays. And sure enough. My left knee has severe arthritis (which I knew) and so does my right hip (which I didn't know). I have struggled with that hip for a couple of years now, with no improvement. A front-view x-ray taken a year ago of my pelvis and hips showed mild arthritis. The new ones, taken from different angles last week, reveal the severity. I am so relieved! That's the reason for the consult on June 22.

My friend said she thought I'd be lunching with friends now that I'm back in Washington. But I don’t have a village up here like I do in Tucson. I’ve got a few friends I meet up with. I’ve seen two of them already, and am having coffee with another on Friday. It is much quieter here. I’m considering volunteering to mediate in small claims court, but I sent a letter of inquiry a few weeks ago and haven’t heard back. I suspect that agency is shuttered for now and that my records of certification and competence are locked inside the physical building, so the current assigners of work - if there is any - don’t know I’m qualified.

My friend wondered if I could go out and leave Art alone or whether I am a full-time caregiver. Yes, Art can be left alone. He is fairly self-sufficient except for things like shopping, cooking and driving.  I do the grocery shopping and the cooking. I run errands. I get massages. I bought a new pair of Birkenstocks last week. I bought a Lazy Boy recliner.  I’m the only driver, so I’m out and about. On Friday we went to IHOP for breakfast where I encountered people Not Like Me and observed unconcerned sexism. I gave our server an extra-sized tip and a few moments of commiseration. Last night we ordered pizza and shared it with our upstairs kids. I ordered peppermint oil spray to keep the spiders out. Next week we’re having a couple of dead trees cut down, and half a dozen cedar trees trimmed to let the sunlight in upstairs. After that we’ll have the windows washed.

We have an enormous amount of stuff. I am rehoming them a few items at a time. Yesterday it was seven decorative pillows, a bag full of plastic containers with matching lids, two extra artichokes, and a silk ficus tree. I’ve come upon three vacuum cleaners in the storeroom. One of them is labeled with the name of the housekeeper we had until three years ago. I have to get in touch with her. I’m getting ready to rehome a set of Travelpro luggage we haven’t used in ten years.
At the same time I’m making this place our home. I’ve ordered from Amazon: bench seat for the shower, bathmat for the shower, a right-sized coverlet for our bed, a light blanket exactly like one we have in Tucson, for naps. Picked up a set of pots and pans from Buy Nothing Brier, took what we needed and donated the rest to a family whose rented home burned down last week. I am busy all day. Most days my Fitbit says 5,000 steps by the end of the day - some days when I haven’t even left the house.
My son James came by yesterday and installed a grab bar for the shower, two clothing hooks for just inside the bedroom door, two window blind gadgets so we can raise or lower the shades, one more security light for the path to our apartment, a brighter light for the storage room. He bundled device cords by my desk and by my recliner. All useful things.
I get testy with Art sometimes because he’s not in the fix-up mode I’m in. He’s mostly content to read the paper, work the puzzles, read, and watch "kill and maims". In the meantime, my knee and my hip make themselves noticed just about every minute, so I’m in some discomfort and I have a shorter fuse. This too shall pass, though. I’m grateful that neither of us is sick, that we have the financial resources to do what needs to be done and that kids are willing to help.
As we say in AA, “more will be revealed”.
Posted by Linda Myers at 3:37 PM 7 comments:

We live in Tucson between November and April, and in Brier, a Seattle suburb, from May to October. So there's a transition every year as we move between our little places.

Last summer we remodeled our daylight basement in Washington to create a no-stairs apartment for ourselves. The previous year I'd had trouble sometimes negotiating the stairs with a cranky knee. So Art designed a downstairs living space, and he worked with my son James on the remodel. It's a beautiful, warm and welcoming home for us, as well as being ADA compliant. Just what I'd hoped for.

We really thought the remodel was for me.

But last summer, while doing the wiring for the new apartment, Art strained his back. By fall he had to walk bent over to avoid the back pain he experienced when standing straight up. In late fall he had the first of three lumbar epidural injections. The last one, in early April, resulted in weakness in his right leg. Art fell several times. Two CT scans revealed multiple pinched nerves. The pain increased, requiring a trip to the emergency room in Tucson. He'd used a walker for several months to stabilize himself, but by May 1 he preferred a wheelchair. Two days after we returned to Washington we saw his primary care doc, who confirmed Art would need surgery. Four days after that, we met with the neurosurgeon. We're hoping surgery will happen by June.

We're adapting to Art's current disabled state. I'm doing the shopping and cooking, which Art has done for 25 years, plus most of the other tasks of living. Art is learning to maneuver in our apartment, becoming more self sufficient each day. And he has learned to stay ahead of the pain, with tylenol and ibuprofen and a prescription medication.

We're getting great support from our family. Art's son Jason lives upstairs with his family; he brings the paper and the mail and spends time each day with his dad. His wife Kalei brings down food goodies. Son Peter is a nurse and went with us to see the neurologist, sending a summary email to everyone afterward. Daughter Melissa is a pharmacist and is a wonderful resource. Son Russ in Oregon is also a nurse, and has been very encouraging. Son James, who did the remodel, came over two days ago to install grab bars in the shower and beside the toilet. My sister Alyx is a nurse as well, and she's been actively involved; her husband Virgil flew to Tucson to help Art close up our winter place and then fly home with him, while I drove with a friend for three days to bring the car back.

Really glad for our new living space, for Art as well as for me. 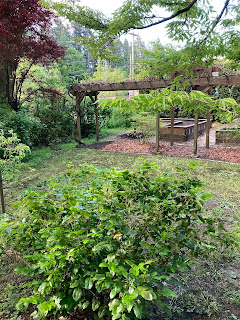