We're in the sky now, flying home to Seattle for the summer. The last 17 days in Tucson have been the quiet between.


And the after:
I have loved the quiet between:
I consider making the quiet between my revised normal. I note the newly diagnosed asthma that troubled me all winter has dissipated and no longer requires medication. I wonder whether it was aggravated by the stress of my self-selected busy-ness. The daily meditation has slowed the pace of my body and my mind.

I probably won't revise my normal very much. I'll keep doing the meditation, though. I really like it. That may be just the quiet I need in the after.

The case of the beeping pacemaker

One day last month in Greece, my husband Art started beeping from inside his body. I looked at him. He said, "It started this morning. I thought at first it was my cell phone, but I didn't have it in my pocket. I looked around and didn't see anything. Then I realized it was coming from inside of me."

"How often has it happened?"

It's been over three years since Art had a cardiac arrest and had a pacemaker/defibrillator installed. His defibrillator shocked him twice in the first 18 months, and each time an adjustment was made to the device or his meds. He has had only a few episodes of atrial fibrillation, the last one nearly a year ago. And he has never beeped.

I'm the vigilant one for health issues. I insisted he talk to the camp doctor. Zisimos Solomos was friendly and helpful. He said, "You need to go to the ER at the G. Gennimatas Hospital in Athens. It's a public hospital but has excellent cardiology doctors. You should have your heart checked out right away."

I was the driver on this first venture into Athens. I relied on Google Maps. What should have been a 55-minute drive took over two hours. The Google Voice spoke English but got confused on the busy streets of Athens.

We parked in the large lot and walked toward the hospital. All the signs were in Greek. We looked for an ER sign and finally got directions by way of pointing and gesturing. In the lobby we approached the desk. One women of the three spoke limited English. She asked a few questions, then gave us a number and said, "Wait here," pointing to a long row of mostly-occupied chairs. And we did. For two hours. While people on gurneys were rolled by attached to their IV lines, followed by multiple family members. People shouted in worry or protest. Art said it looked like Harborview Medical Center in Seattle on a Saturday night. It was Wednesday afternoon. We had filled out no paperwork. No one knew Art's name.

Finally Art's number 14 was called. He followed someone into the ER and the door closed. I waited next to a wall outlet while I charged my phone. A man lying on a gurney next to me threw himself on the floor, shouting. People gathered. Art emerged from the ER. "They did an EKG and my heart is fine. I need to come back tomorrow morning at 8 a.m. to have the device checked."

We left the volunteer house in Dilesi the next morning at 6:30 for what, again, should have been a 55-minute drive. Google Maps took us on a different route, and we got seriously lost. We arrived at the hospital at 8:40. "English?" I said, multiple times. People pointed down a hall or up a flight of stairs or "end of the hall on the left". We found a doctor who spoke English and told him the story. "That doctor is installing a pacemaker right now. He can see you in about an hour. Sit here and wait."

We waited for an hour and 45 minutes. A man with a stethoscope said, "Are you the man with the pacemaker beeping?" Art and I followed him into a small room where he checked out Art and his pacemaker. After five minutes he called another man into the room. They had a discussion in Greek while Art lay on the table. The man with the stethoscope said, "We made a few adjustments. The beeping should stop now. Come back Tuesday."

There were no further beeps. We went back Tuesday, took a number and waited for an hour. Art was cleared. No paperwork, no insurance inquiries, no bill. No one ever asked his name.

The next day Art said, "You know, I think the pacemaker might have gotten screwed up when I got shocked by the stove last week."

"How did you get shocked?"

"Touched a pan on the stove with bare feet. They have 220 here."

I had no idea what that meant. 220? So what? I Googled "pacemaker beeping" and learned that sometimes an electrical shock will be interpreted by the device as a problem. I guessed that might have happened. But beeping?

A month later, Art started beeping again. This time we were home in Seattle for ten days before returning to Tucson to close up our winter home and retrieve our cat. We called our local pacemaker nurse and she said we should come in right away. We did. She analyzed the data and said, "You had an eight-hour episode of atrial fibrillation earlier this week."

"What happens," she continued, "is that your pacemaker has been programmed to detect irregularities. If it finds one, it tries to send a message to your remote device, which relays the message to us. It tries for three days. If it can't send the message, it starts to beep every four hours on the hour so you will pay attention."

Ah! Art's remote device is on the wall of our bedroom in Tucson. Not in Dilesi, Greece. And not in Seattle, until we bring it home.

Art hadn't had an a-fib episode in ten months, though. So what had happened?

"Well," he said, "I packed all my meds in my checked bag. In three bottles. When I unpacked my bag in Greece, only two bottles were there. Maybe TSA took one of them out, I don't know. So I had to ration my meds for a month."

What could I say? How about, "Next time, text the doctor in Seattle and ask him to prescribe meds for you from a pharmacy in Greece." Or "Next time, tell me this when it happens so I can do the texting." Or, "Next time, pack your meds in your carry-on like every other traveler I know."

Probably wouldn't have done any good, though. Art is pretty sure I'm oversensitive about medical issues.

This week we're in Tucson with the remote device. If there's a problem, the device will relay it to our pacemaker nurse, and she will call.

From now on when we travel, I will make sure that Art packs his meds and his remote device in his carry-on. It will save a lot of time and aggravation. And I won't have to drive in a busy, unfamiliar city.

This was the third time I'd volunteered at the Oinofyta refugee camp. Some things were the same, of course: the daily routines of the men and women; the shouts and laughter of children playing; the procession of students across the field to their school; the clusters of men in conversation. And some faces I recognized from last October when I spent two weeks at the camp.

There were differences, too. The sewing room was active with residents making cloth tote bags from the canvas of tents that were taken down when the building was expanded to a second floor. The workers earn an hourly wage based on the sale of the bags on https://www.oinofytawares.com/. Classes were beginning in the computer lab. And there were new faces.

This time I was here for a month, and I had been asked by Lisa Campbell, Executive Director of Do Your Part (https://doyourpart.org/) and the Oinofyta camp manager, to relieve her in that role for two weeks while she spoke at multiple fundraising venues in the US. This time I brought my husband Art - he'd be shopping for food and running errands and preparing meals for the dozen or so Do Your Part volunteers. And, for 15 days of the month, my son James Granholm would be one of those volunteers.

Here's what I learned at the volunteer house in Dilesi, where each person pays 10 euros a day for room and board. 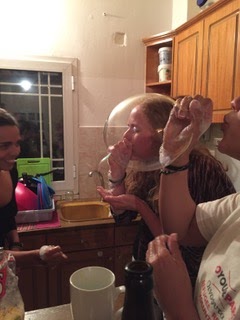 And at the Oinofyta camp, the exact same kind of things I experienced in the workplace:

And about my family: 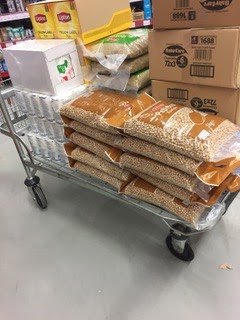 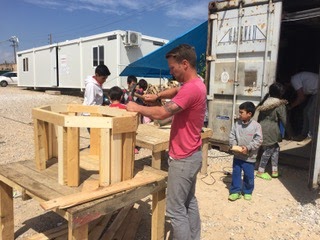 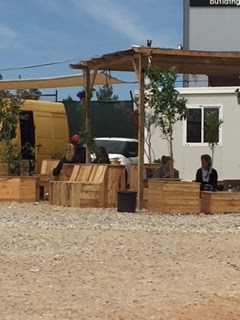 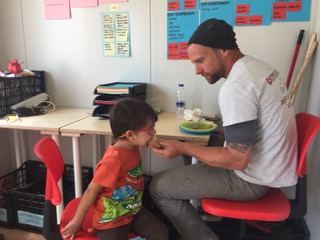 I also learned these things about myself:
I'm very glad I spent the month at Oinofyta. And I'm very glad and grateful to be home.