Four men and their ladders

My husband Art stopped smoking before I met him in 1992. I asked him how he'd managed to do it, and he said, "It's as easy as falling off a ladder." Apparently he'd broken two ribs when he fell at some point, and it hurt too much to breathe, so he had to give up smoking.

This summer we remodeled the daylight basement of our home in Brier. Art did all of the wiring and electrical work. He was there three times: for five weeks in June, a week in July and three weeks in September. He spent a lot of time on ladders, leaning and twisting and reaching upwards and through. 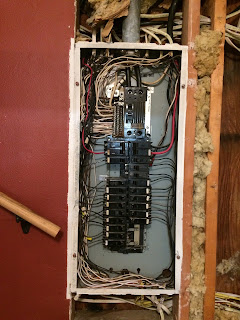 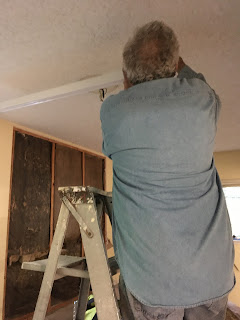 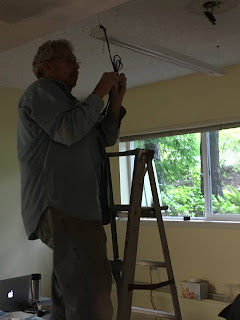 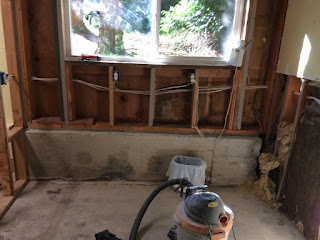 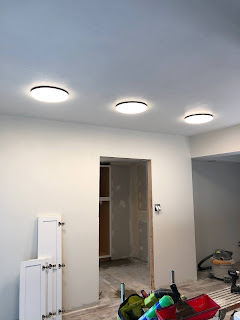 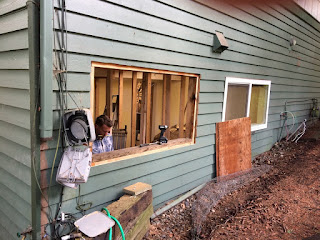 Art did a phenomenal job on the project, but it was too much for his back. He has spinal stenosis anyway, but his nerves and muscles got inflamed, and he developed sciatica and muscle cramps in his legs. By September he was walking hunched over at nearly 90 degrees because that position lessened his pain. He saw a physical therapist three times, and got a lower lumbar injection which helped somewhat on his left side.

We returned to Tucson on October 31. About a week later he got a call from the Washington clinic where he'd gotten the lumbar injection, asking how he was doing. He said he was feeling better. They asked if he wanted to get a second shot. He said no.

A week after the phone call, the shower curtain rod in our tiny Tucson bathroom fell down. Art, ever the handyman, wanted to remount it. He stood for 45 minutes, left foot on the toilet seat and right foot on a chair, while he twisted and stretched upward. Eventually he gave up, in too much pain to continue. It turned out that a small piece of the rod had broken off where it attaches to the wall. I went to a nearby store and bought a new one for $8.99, and our across-the-street neighbor, Mike, came over and put it up in about ten minutes.

It's been a month since then. Art has seen the physical therapist in Tucson and has more exercises to do. He has begun water walking three times a week. He has a cane, a pair of walking poles and walker. His doctor says the walking poles would be the best to use, as it would support him standing up, but he prefers the cane and the walker for some reason. He's been prescribed a couple of medications but they haven't given him the relief he needs.

We are researching a second lumbar spine injection, but his insurance won't cover the procedure here in Tucson until January 1. Otherwise we'll pay cash as soon as we find a doctor here who is available.

All this, and he didn't even fall off a ladder!

Dick and JoAnne are friends here in Tucson in our retirement community. One day last month JoAnne went into town to play golf with a few friends. Afterwards they stopped for breakfast at a favorite eatery. Just as the food arrived JoAnne got a call from a neighbor. At home, Dick had decided to put battery-operated lights above the kitchen cupboards. As he was descending on the stepladder, he fell and broke his leg near the hip. He knew he needed to get help. The closest door was in the living room, but there was carpeting, and he knew it would be tough to drag himself across the carpet. So he headed for the kitchen door across the flooring. The door was locked but he managed to get it open and shout for help. A neighbor heard him, an ambulance was called, and he was taken to the hospital. The ambulance had just pulled away when JoAnne got the call. The neighbor wasn't sure which hospital Dick had been taken to. Eventually Dick was located. After surgery to repair the break, and a few days in the hospital - where JoAnne couldn't visit him because of the coronavirus, Dick went to rehab. He is home now, using a walker until his leg heals and he regains his strength.

Last night four couples gathered for dinner, masked and social distancing. Two of them were Art and Dick, both on walkers.

John and Joan are Tucson friends living across town. Last week, John decided to put up the outside Christmas lights. For the first batch, he asked Joan to hold the ladder while he climbed it. Afterwards, Joan didn't realize John had more work to do on the lights, so she went inside. John went back up the ladder. The ladder collapsed and John was left hanging on the tree branches. When he dropped to the ground he sprained his ankle. Apparently John made one more attempt. This time the ladder fell over sideways, and John fell across the ladder on the ground, resulting in multiple bruises.

Al and Bonnie live in our Tucson retirement community. Al's mishap happened some time ago, but I just found out about it this morning.

Al decided to climb a ladder to the roof of the couple's park model mobile home. Bonnie says she didn't know why he needed to go up there, but Al was insistent. The ladder didn't reach all the way to the roof, but on the ascent Al had no trouble reaching it. It was when he was coming down that he got into trouble. He couldn't get onto the ladder from the roof, so Bonnie had to call security to give him a hand. She said Al was pretty embarrassed!

I'm not going to talk about Art and the tree stories. Maybe another time.