It's been two weeks since my last blog post. I have done no traveling and had nothing out of the ordinary happen. But I have been thinking.

We live in interesting times!
Posted by Linda Myers at 2:30 PM 11 comments:

I have made two trips to volunteer at a refugee camp in Oinofyta, Greece. My first was in August 2016, for six days. I went with an old friend, Jenean. I learned a lot about the refugee situation and about myself. You can read about that trip on these blog posts: 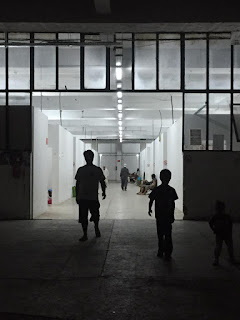 The second was in October of the same year, for two weeks. I took another friend, Jann. Here are two blog posts about that trip.

Most of the time I was watching and listening and learning and doing, from moment to moment. My head and heart filled up. The experience was not at all about me. It was much bigger.

The day before I left I had a conversation with two refugees, Abdul and Ali. Abdul told me his story in Farsi and Ali translated for him. Here's the blog post about that.

As of today, the post "Abdul tells me his story" has been read 966 times. I know that because Blogger, my blog host, keeps track. But I have no idea who the readers were. If I add the total number of followers of my blog and the total number of my Facebook friends (I post my blog to my Facebook page), I'm short by 450 people. Who else has come upon Abdul's story?

As a blogger, I have a responsibility to honor and care for people I talk about. Abdul and Ali both reviewed my Abdul post before I hit the "publish" button on November 9. Now they are public figures of a sort, through my blog.

I heard from both Abdul and Ali this week. Abdul is still at Oinofyta with his wife and two-year-old daughter and newborn baby girl. He wants to leave camp in the spring and move on. Ali is now in Serbia at a camp there, with his wife and baby and his parents and his brother. His baby has been in the hospital for a week with a chest infection. Ali wants to move on into an EU country in the spring.

Abdul and Ali have both asked for my help.

I still cannot give them money. I can give them my time and my listening ear and my voice. I cannot imagine their circumstances. Abdul was a tailor in Afghanistan. Ali worked for the US government in Afghanistan as an IT professional. Both left their homeland because their lives or their families' lives were in danger. In the refugee camps, they are safer now. But their lives are very, very uncertain. These men have families to take care of, and they are doing their very best with very little.

I am returning to Oinofyta in March. This time I will be there for a month, and I am taking my husband Art along. We volunteer for doyourpart.org, a small American nonprofit. The camp manager, Lisa Campbell, was a cofounder of DoYourPart ten years ago. She is a walking wonder, the linchpin of Oinofyta. It is an honor to work with her and to observe the work she and other volunteers do to make the camp a liveable place for refugees, for however long they stay. I want to continue to be a part of that. It has been a life-shifting experience for me.

If you want to help the refugees at Oinofyta, you can contribute at www.doyourpart.org. Everyone is a volunteer, so all money is used "on the ground".

I wish I could do more for Abdul and Ali. And all the others. We are all the same. And we are all in this together.

Art woke me early this morning. "There's a javalina in the trap."

And so there was. From the window of our Arizona room I could see it easily. 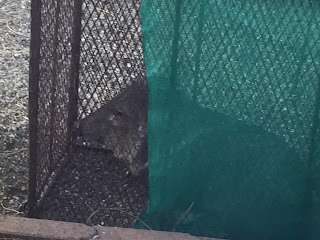 I texted Marc, the "javalina whisperer" from Animal Experts Wildlife Control. "We have a creature in our trap." I heard back from him right away. "I am on my way. Your neighbor Eldon already called me."

I watched as Eldon came out of his rig and took pictures. The javalina was not happy to see him. It rose to its feet, bared its teeth and hissed.

Left alone again, the animal alternated between periods of quiet - like it was thinking - and charging the crate from within, snouting at the seams and kicking. I hoped the container was strong enough to hold it.

Marc arrived in his truck. 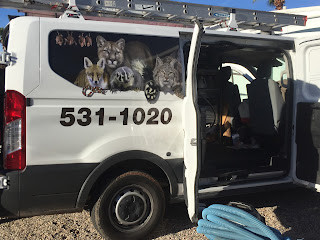 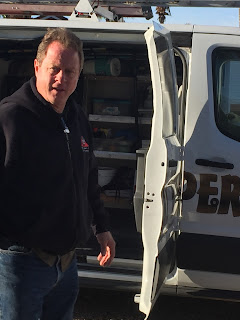 He looked at the javalina. A male, he said. Most likely, it was the alpha male in a herd and was challenged by a younger male for the alpha position, lost the challenge, and now lived alone. "Javalinas don't do well alone." It made sense that the solitary animal would seek a safe place - like under our park model.

Marc got his dolly and manipulated the crate beneath it. 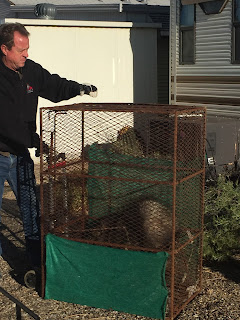 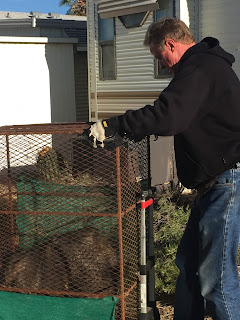 He looked inside and said, "Uh oh. He's wrapped an interior chain around his leg and he isn't going to be able to get out of it." Marc thought for a minute, then went to his truck. He came back with a small saw. He opened the lid of the crate and, talking to the javalina, leaned into the container to cut the chain off. 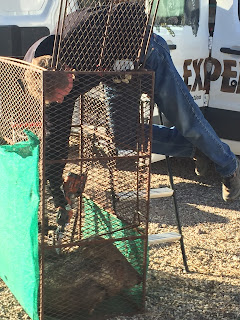 Once the animal was freed up, Marc resumed his work with the dolly and loaded the crate into his truck. 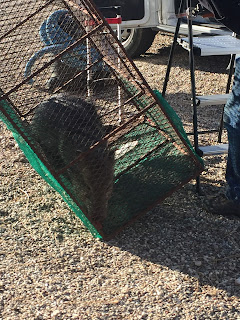 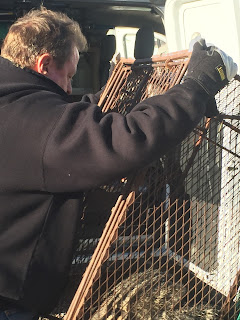 The javalina calmed down once in the truck. Marc said he'd drop him off at Dove Mountain, between Tucson and Phoenix, where there are several herds. "Our" javalina may be accepted by the herd. 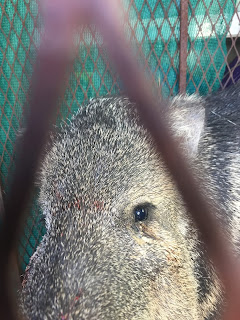 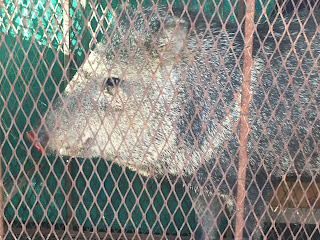 We've been thinking about this fellow for over two months. Now we can send him off with our best wishes for a good life elsewhere.

I hope he was the only one who lived under our place!
Posted by Linda Myers at 12:04 PM 10 comments:

After an absence of over a month, the javalina is back. Sometimes.

Earlier this week a neighbor knocked on our door. "Did you know the javalina is under your park model again? It was about 3 in the afternoon. The neighbor led me out to the back yard. "See that hole? We were just standing here and it came out."

Sure enough, another hole in the skirting.

"It came out yesterday, too, at just about this same time."

I texted Marc, our "javalina whisperer". He agreed it was time to trap the animal and move it to another location.

Here's the humane trap now set in our back yard. The idea is that the javalina will approach the trap and eat the potato and the peanut outside safely, then come back for more, with more confidence.When it steps into the trap for the food inside, the gate will come down. 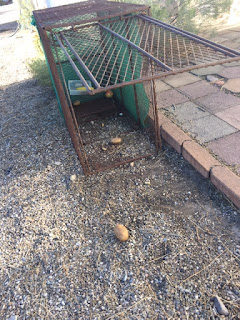 For the curious, here's a video about javalinas, sent to me by my old friend HeeSun Gerhardt.

Marc says he will relocate the animal in an area where other javalinas live so it can join a new family.

First, though, we wait. My husband Art thinks the animal may seek shelter under our place when it's cold, and we're heading into a warm spell, so we may need to wait.