What the Bag Lady learned this month

Even in normal life there are learnings. Here are some of my recent ones.

1. If your husband is in a play, rehearsals are the most important thing. Once it's over, the calendar opens way, way up. 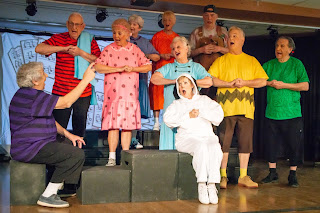 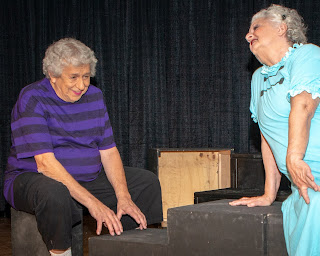 2. I can experience Las Vegas with some appreciation about every five years.

3. A criminal investigation has to gather enough evidence to convince a jury. The expert witness has to know every detail in the report they filed, because the opposing attorney will question their competence if they need to refer to their report at all.

4. Walking the Strip on a Wednesday evening is a colorful and safe experience. If you are a grandmother with purple hair, a slightly inebriated millennial may give you a high five. 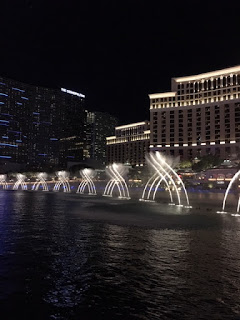 5. Cirque de Soleil has come a long way in the last 25 years. The gymnasts are still astonishing athletes, but the sets and lights and sound are just about overwhelming, in a good way.

6. If you catch your husband's cold just before a road trip, you will absolutely pass the cold along to your travel companion.

7. One cold requires at least five boxes of kleenex.

8. Walking in a slot canyon is more impressive than the photographs you've seen. 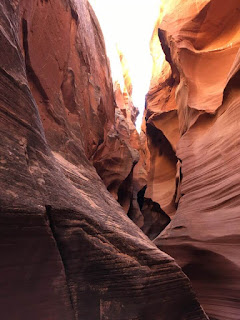 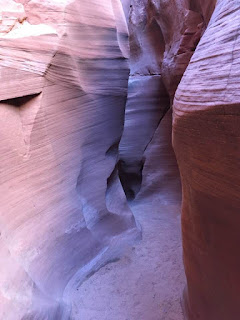 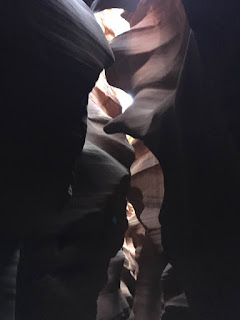 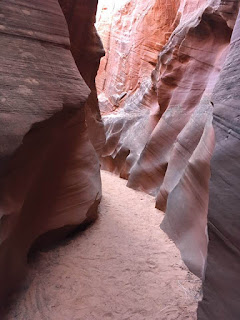 9. Sometimes if you decide you're not going to buy a recliner for the front room this year, you meet a new neighbor who would love to help you shop for one. Or maybe two.

10. In a winter resort, sometimes your friends will move away. You will be glad for them and sad for you. Where you live in the summer, someone will die while you're away and you won't know about it until months later. You will wish you could have gone to the memorial service.

I can only juggle four balls

When I was in my 40s, I had a busy life: full-time job, single mom with two kids. Then, still a full-time job, second marriage, two kids and six stepkids. You know, all the accoutrements of the peak years. I was juggling about nine balls without dropping them very often. I had a day planner to keep track of things. I didn't have a calendar on my computer that synched with my phone to remind me what I was doing. A day planner was enough, and some days I didn't even look at it.

At some point, probably in my early 50s, I dropped a ball more often. Maybe I'd forget an appointment or to return a phone call. Or I'd forget my shopping list at home and, when I got home, look at it and realized I'd forgotten to buy two of the nine items I had on the list. I was uncomfortable to think I might be losing it.

Then I realized I wasn't. I just wasn't good at juggling nine balls any more. So I dropped my expectations and decided to juggle only eight. That was the perfect number.

A few years later, seven was the right number of balls to juggle. And so on. For the last few years I've been juggling five balls with a fair degree of success.

In the last month or so I've forgotten a few names, gotten stressed out and even anxious about issues that used to be easier to cope with. I thought maybe I was losing it again, or maybe I was beginning the last long decline. It scared me a little. I'm only 70, after all.
I'm in the throes of making decisions about how I will spend my time. My brain got all wound up around itself trying to decide. I'm analytical by nature so I was pretty sure I could figure it out in a rational way.

I've learned, though, in recent years, that if I've got a problem where a solution is eluding me,  I can "turn it over" to something greater than me. Some people call that something God, or Higher Power, or Heavenly Father. I call it the Universe. So I turned the problem over on Friday. In my experience, once I turn it over, the solution appears within 48 hours or so. A "Sign", you know.

And it did. I was given a solution to the problem that I hadn't even considered before. That's how I know it wasn't my brain working, but Something Else.

Then came yesterday. I walked home from my water exercise class and stopped to talk to my neighbor. I'd agreed to go for a bike ride with my good friend Ellen; she would be by at 1:00 to pick me up. At 12:45 I realized I only had 15 minutes left. But my neighbor had expressed an interest in seeing the dining room table I'd bought for our park model. I said, "Come on over. I'm heading out in 15 minutes, but you can take a look." So she did. While she was chatting with my husband, I retrieved my biking helmet from its closet and laid it on the couch. I removed my ID, insurance card and credit card from my wallet and put it in my biking pack.

Ellen arrived promptly at 1, just as she always does. I said a hasty goodbye to my neighbor and headed out.

Halfway to the biking start point, I realized I'd left my helmet on the couch, and my phone on the charger. I decided I'd be okay without them. I've been on the Tucson biking trails numerous times and it had always been uneventful. I felt a little uneasy about the helmet, but didn't want to take the time to go back.

About a mile along the trail, Ellen said, "Oh, Linda, look!" She was about eight feet in front of me. I looked where she was pointing and, at that same time, she slowed down. I turned my head back and she was two feet in front of me. I knew I was going to run into her. I had about half a second to prepare for my fall. But my brain wasn't nimble enough to call out a warning so she could brace herself as well. We both went down. Ellen's foot was caught in the spokes of her front wheel, which I extricated. She was bruised and shaken but otherwise uninjured. The rear wheel of her bike had been immobilized by a jammed brake. Four people came along the trail and stopped to help while I stood there watching, having no idea how I could be useful. Twenty minutes later, after much tugging and pushing, they managed to detach the brake and free the wheel, and we returned to the parking lot, Ellen riding carefully with only her front brake operational. On the way home we stopped at a bike shop to have both bikes checked out and adjusted. The shop didn't charge anything for the labor, so Ellen bought a mirror and I bought a pair of bicycling gloves and a small toolkit for my bike.

I'd been juggling too many balls. I'd added a visit with my neighbor to my schedule for the day. I'd left my helmet on the couch and my phone in the charger. But worst of all, I hadn't thought to warn Ellen I was going to run into her.

Clearly, another Sign. These days, I can only juggle four balls. Not five. Four.

I'll be a fine juggler of four balls.