I chatted online last night with my Afghan friend Samira, who is still in Pakistan with her husband and three small children. In December she had found a research scholarship the University of Turin in Italy. All she had to do was get there.

Acquiring a visa required passports stamped to prove legal entry into Pakistan. And she did not have those, because when the family left Afghanistan and entered Pakistan, its passports were taken, then returned, with no stamps. Also, at the border, the family's luggage was stolen, with all of Samira's documents buried beneath the clothing. This is often the case with migrants entering a new country.

No exceptions were allowed for Samira and her family to leave Pakistan without the passport documentation. So she recently returned to the border and got the passports stamped. That is a story for another time. I was pretty much speechless when she told me about it.

On February 2 Samira will take her passports to the Italian embassy in Islamabad, and she told me the visas should be issued within a day or so. The family will then be able to fly to Italy to begin a new life.

I have two friends, Janet and Jack, who have offered to pay the travel expenses for Samira and her family. I have been in touch with Simona, Samira's Italian contact, who is a university professor. She is working with a travel agent to get prices for a flight to Milan and a train to Turin. I will wire the funds; Janet and Jack will reimburse me.

Simona tells me that Samira's first paycheck will not be issued for two months, so funds will be needed to support the family until that time. Her paycheck will be 2,000 euros a month. So I will be doing some fundraising in the next week to give her 4,000 euros (about $4500) for rent and living expenses until her paychecks begin.

We hear so often about the tragedies experienced by refugees who have to leave their homeland because their lives are in danger. I met many of them when I volunteered at the Oinofyta refugee camp in Greece. Samira is the sister of Nadim, one of those Oinofyta refugees. When Samira and her family arrive in Italy next week, I will be relieved and grateful to have helped.

I tell this story often:

One day a man was walking along the beach, when he noticed a boy hurriedly picking up and gently throwing things into the ocean. Approaching the boy, he asked, “Young man, what are you doing?” The boy replied, “Throwing starfish back into the ocean. The surf is up and the tide is going out. If I don’t throw them back, they’ll die.” The man laughed to himself and said, “Don’t you realize there are miles and miles of beach and hundreds of starfish? You can’t make any difference!”
After listening politely, the boy bent down, picked up another starfish, and threw it into the surf. Then, smiling at the man, he said,
“I made a difference to that one.”
(adapted from The Star Thrower by Loren Eiseley)
If you want to help Samira with a contribution to her living expenses for the first two months, please email me at budsmom48@gmail.com, or call or text me at 206-499-0934.
We are all in this together! 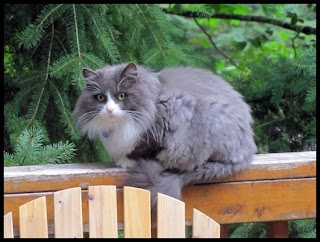 We've had Larisa, our Designer Cat, for 11 years. She is a Siberian Forest cat; her registered name is Windrifter Larisa of Lundberg. She was a breeding queen at a small cattery in Oregon, and she was retired when she was five years old. We bought her because my husband Art is allergic to cats, but Larisa is a very-low-allergen cat and he is not allergic to her.

Larisa would not let us touch her until she had lived with us for 62 days. Now she's a typical cat.  We can touch her when she lets us.

We live in a Seattle suburb for six months of each year, and in Tucson for the other six months. Larisa travels on the plane in a soft-sided crate under the seat. She knows both of our homes and heads for the litter box when she first arrives at each place.

Last June, in Washington, I watched her exploring the yard. She looked a little hesitant, a little stiff. I guessed she had some arthritis in her hips. I hadn't noticed it until then because we'd been in Tucson, where it's warmer and drier and easier on the joints of most elderly creatures. We called our vet and she prescribed gabapentin for Larisa's arthritis. Powder in a gel tab. We spent most of the summer trying to get Larisa to take her medicine, a usually fruitless effort very familiar to cat owners all over the world.

Also last summer, Art had back surgery in June and I had a hip replacement in August. We were both distracted by some pain and by the pre- and post-surgical limitations each of us had. Larisa had gotten a close haircut in the spring, when the weather in Tucson got hot, and it grew all summer in Washington. By the time we left for Tucson again in October, Larisa looked like a slow-moving hedgehog.

I noticed that she wasn't grooming herself much. She had mats in her fur - under her chin, on her belly and on her back just in front of her tail. We'd brush her, but she was sensitive in the matted areas. Her coat looked dull. I wondered if she was sick, or just on the decline.

Last month, finally, we made an appointment for Larisa to be groomed. She got a bath and a haircut. It had been over six months. Art and I had been distracted enough by our own issues that we hadn't thought about it. We realized then that Larisa's arthritis had prevented her from reaching the mats to take care of them herself. When she moved or we brushed her, the mats had pulled on her skin.

When we brought Larisa home from the groomer's, she was a different cat. She had a very short cut. She spent the first half hour grooming herself. Then she played with toys she'd ignored for months. She sits on my lap now most evenings. She sleeps in our bed most of the night.

She's a happy cat. She's purring on my lap right now, her tail resting on my keyboard. 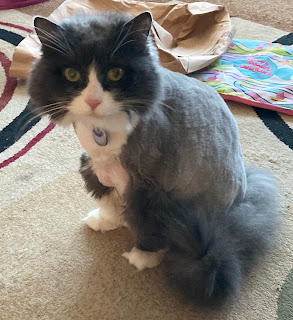