Two evenings ago, I drove with another volunteer - I'll call her Ana - to have a conversation with a refugee from South America - I'll call him Roberto - now detained in Eloy, Arizona. I wanted to see what the detention facility was like, and have a conversion with a person actually there, and learn more about what was going on. Here's what happened:

1. In the La Palma facility, the staff is friendly - almost welcoming - to visitors. On entering, we left everything behind except driver's license and car keys. And when going through security, we left license and keys behind as well.

2. Between the second and third security gates, I viewed a glorious sunset beyond the concertina wire, but couldn't take a picture because I'd had to leave my phone in the car.

3. Ana and I sat at a round table across from Roberto for an a hour-long conversation. The room, a cafeteria, was full of such tables and such conversations.

4. Our conversation was entirely in Spanish, though Ana translated any questions I had. I'd say I understood about 20 percent of it.

5. Roberto, detained in Eloy, has a wife similarly detained at a facility in another state. They are not allowed to talk to each other because facility-to-facility phone calls are prohibited. Their only contact is between each of them and Ana.

6. Roberto's wife has applied for asylum on behalf of herself and her husband. Her hearing was the day before our meeting with Roberto, but none of us had heard the outcome of that event.

7. Roberto has been in detention for four months without a hearing. He will also apply for asylum on behalf of himself and his wife. I asked if there's a database that will show the same two people applying for asylum in two locations. Roberto said he does not think there is such a database.

8. Roberto and his wife are in fear for their lives. As I listened to their story, I know for certain their lives are indeed in danger.

9. Roberto said, "It isn't fair that people who come across the border illegally are getting hearings more quickly than people who came across legally."

10. I know more of Roberto's story, but I'm not going to say more here, for the sake of his safety.


Last evening, my husband and I spent our usual four hours volunteering at a refugee shelter in Tucson.  We had 20 guests - ten adults and ten children. Most of the people this week were from Guatemala.

Our shelter is serving only families - one or two adults with one or more of their children. Children cannot be detained for more than 20 days, so this shelter system has been devised. Within a two-day period, the families will travel to sponsors in other parts of the US to apply for asylum there.

I understand that in times of rapid policy change, agencies may scramble to comply. The children are being kept with their families, but where is the fair treatment of cases for people like Roberto, whose lives are in danger, where their hearings are not close at hand?

Over all these things, I know I am powerless. So I listen to Roberto, and provide a safe place for the shelter guests, one person at a time.

I'm usually an optimist. This week, though, not so much.

1. For eight days I've been just a little off healthwise. You know, the winter stuff. A sinus issue with off-and-on vertigo. Lower energy. A little anxiety. Passing up opportunities for walking, riding my bike and doing water exercise. Even foregoing a John Denver tribute concert last week. When I'm even a little bit sick, everything looks pointless. I've learned not to take my bleak thoughts seriously, but still.

2. My friend Ellen helped me arrange pictures on a wall of our little place. They're all from the refugee camp at Oinofyta where I have spent so much of my time, money, energy and passion in the last two year. I love the arrangement, but now every time I pass that wall I remember. And I am there again. And things at Oinofyta are quite different now, and not in a good way. 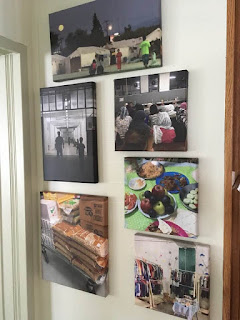 3. It has been cloudy and cool in Tucson for over a week now. I like the sun. I should say I NEED the sun.

4. ICE has released 100 people today after two weeks of very few. I wish asylum seekers weren't pawns in political maneuvering. I'm at least glad we have signed up for an extra shift this week.

Here's an email I just got this morning:


5. I'm almost reluctant to post this, given my usual positive outlook. Still, I'm sure I'm not the only one. Right?

For the last six Saturdays my husband Art and I have volunteered for the evening shift at the refugee shelter at St. Francis in the Foothills Methodist Church in Tucson. The shelter is part of the Inn2America project. We serve dinner and keep company with about a dozen refugees from Guatemala or Honduras or Mexico or El Salvador who have been released by ICE, on their way to family or friends in the United States who are sponsoring them. Our guests spend one to three days at the shelter, waiting for their sponsors to pay for bus tickets to their destination. While they're at the shelter, they're fed and clothed and housed - and welcomed to a place of safety. We do whatever is needed between 5 and 9 on Saturday evening.

It's a lot like the work we've done at a refugee camp in Greece for the last couple of years. Though three years ago the refugee situation was only a vague idea in my mind, it's become a passion for me. And I'm especially grateful that Art has chosen to do much of the work with me.

But tonight I'm at home instead. I got a text early this afternoon from the shelter coordinator. She said, "For the third day in a row there will be no guests at the Inn2America project. ICE is releasing very few people. We don't know why. So no need to come in this evening."

I have learned it is futile to get angry or frustrated over things I have no control over. ICE is one of those things. I suspect there's something political going on, most likely related to the government shutdown.

So I have tonight at home. As soon as I finish this blog post, I'll practice my Spanish on Duolingo and then probably read. I'm just about done with Michelle Obama's memoir.

I'm inside my little home in Tucson, listening to the rain on the metal roof. I hope the refugees being held by ICE are warm and fed and safe tonight. And also the ones at the camp in Greece.