This conversation happened in October, before the midterms, but it's worth sharing.

My husband Art and I have eight kids between us, ranging in age from 33 to 47. In most cases, I don't know how they vote or whether they vote at all.

For my two sons, I know one of them always votes. He's 41 now, and I suspect he is mostly conservative. The other, now 39, has never registered to vote at all. Last year I asked him why he didn't, and he said, "Oh, I don't know. I never pay much attention to stuff like that." I'm not naming names here, to avoid embarrassing either of my sons.

This summer, as the midterms heated up, I pushed a little on the nonvoter. I said, "I hope you will register to vote." He shrugged and said something vague. A couple of weeks later, I said, "If you will register to vote, I will take $100 off the amount you owe me." (He started a new business last year, so he owes me quite a bit more than that). This time he said he would, and the next week he told me he had.

In the middle of October I asked him if he had gotten his ballot yet. He said, "I think so. I'll have to check." I said, "I'm leaving for the winter on October 31. If you come over before then, we can go over the ballot. He said, "Yeah, okay."

In that same mid-October conversation I told him I wanted to draw up a repayment contract for the money he owes me, and would he please come over and sign it. He said he'd be over before I left.

At 5 pm he arrived. I read him the contract and he signed it. Then I said, "Did you bring your ballot?" He said, "Yes." I didn't let him see my astonishment and relief.

Me: "Okay, are you a Republican or a Democrat?"

Me: "Well, historically, Republicans have supported smaller government and fiscal responsibility. And Democrats have supported social programs to protect the poor, elderly and disabled. Let's go through a few current issues and see what you think. That may help you decide who to vote for. What do you think about the Dreamers?"

Me: "Say you have a buddy you've known most of your life. He went to middle school and high school with you. You played on the same soccer team for four years. He went to U Dub and is now working downtown. His parents came here from Mexico when he was two. Now there's talk about deporting him, and others like him, because he's here illegally."

Him: "Well, that's bad! He doesn't know any Spanish, or anyone in Mexico. He should sure get to stay here. But he should also do what he needs to do to be a US citizen."

Me: "Okay. Your opinion aligns mostly with the Democrats on this one."

Me: "How about the gun issue?"

Me: "When you bought your car from your buddy, did you register it?"

Me: "Okay, your opinion on guns aligns mostly with the Democrats on this one." He marked his ballot.

We went over a few more national, state and local issues on the ballot: state initiatives around the environment, additional police training; local issues like a small use tax increase to maintain the streets and sidewalks of the town he lives in. He had opinions on all of them.

Me: "From what you've told me, I'd say you're an independent moderate."

Me: "When I'm voting for people, I want to have someone representing me who pretty much shares my ideas, no matter whether they're a Democrat or a Republican."

Me: "Sometimes, though, I will vote for someone because they're in a particular party. For example, in the national election this time, I voted for Democrats for the Senate and for the House of Representatives, because I want there to be checks and balances in government. That means that if the president wants something to happen, there should be enough people in the other political party to think about it and have a say in what happens, so the president doesn't get too much control. It's in the Constitution, the checks and balances."

Him: "Okay. I get it." He marked his ballot for the Senate and the House.

Me: "Now, the judges on the ballot. Let's look them up online and see what other people think."

We did. We used the Washington Bar Association's website to get their recommendations. And he marked his ballot.

Me: "Now, you tear off the edges of the ballot, and you put it in this little envelope."

Me: "And then you put the little envelope in the mailing envelope."

Him: "Okay. I'll drop it in the mail tomorrow."

Me: "How about you put it on the counter and Art will mail it tomorrow?"

In our family we have one more voter.

I'd say we're pretty typical of couples in or near retirement. We no longer need all the stuff we have, and the house is too big, and there are stairs and slippery winter driveways. I wrote about this last year in a post called Downsizing: a difference of opinion.

It took a year to get started on this very large project. I convinced Art that we should give it a shot, and we made a plan, which I talked about in Rightsizing: a paradigm shift.

So here we are, well into fall, and I am sitting in our living room in Tucson thinking about how the project went. Here's some of what happened:

Several weeks ago I said to Art, "If I ruled the world (I say this when I know it's an attempt to control him), your side of the garage will have room for me to park my Accord this winter, so our tenant can park his car on my side."

On Tuesday of this week, I came home from coffee with a friend to this sight: My car on Art's side of the garage. For the first time since we moved to this house 23 years ago. 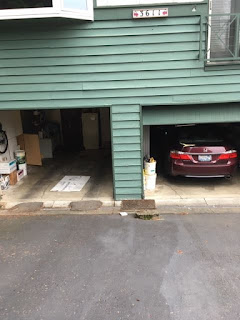 I told Art it was the greatest gift of love I'd ever received from him. And that is saying a lot.

I asked Art just now what he thinks about this project. He said, "It's coming along. I didn't want to do it because most of the stuff was projects that I had planned to do at a later time. And the time just slipped away. So it felt like I was abandoning my projects. But looking at it over and over, I could see that I wasn't going to have time.

"I don't think I could have done it without Penni, the decluttering coach. When I would get stymied she would say, "Do you have to do it?" And if I was still stymied, she'd say, "Well, put it aside. We'll get to that later." Not like the books and stuff that say you have to make a decision and then go do it. It was a working project. Where I could look at and think about things, and then if it was still too big a thing, take it up another day. No pressure.

"It's not done. When we got the renter for the winter, I just started putting everything away to go through next year. Take a break from it.

"I've gone through the missing part of it. I'm glad it's done."