I would never have guessed

Two summers ago, four years after I retired, I took on a couple of part-time paying jobs: One was as lead mediator (one of four to six) at small claims court in my Washington town. After a couple of months of mentoring, I worked for about three hours every other Tuesday for $60. I would have done it for free. The other was as liaison between the 27 Massage Envy clinics in the Puget Sound area and the State Massage Board. I attended meetings every other month, for $250 a meeting. I would have done that for free also.


Last summer, both of the jobs ended. The Dispute Resolution Center decided they wanted a lead mediator who lived in my county full time. I spend the winter months in Tucson and travel at other times. And my one-year liaison contract concluded. I had no idea what I would do next. It was a little disconcerting. "Is this all there is?" went through my head.

Then I had an opportunity to meet up with an old friend, Jenean, to volunteer for six days at Oinofyta, a refugee camp in Greece. It was a life-changing experience. I was the oldest volunteer by 15 years. I didn't have the stamina of the others. But I was on-the-ground useful. At the end of my stay, Lisa Campbell, the camp manager, told me she'd appreciated my calm presence and she hoped I would come back. She asked me if I knew how to set up accounting books. I said yes. She asked if I could set up Do Your Part's books - that's the American nonprofit she heads up at Oinofyta. I said yes. It was volunteer work and that was fine. 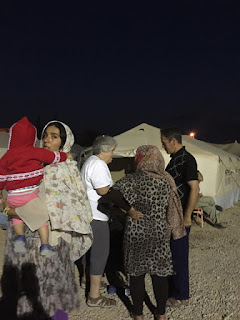 I went back to the camp for two weeks in October. Most of the time I was sitting in the project office working on the books. But not always. Again, on-the-ground, in-the-moment experiences.

Three days after I got back from this second trip to Greece my husband Art and I flew to Tucson, where we spend the winter. In the midst of our activities there, I worked on the camp books. Then Board of Directors of Do Your Part elected me treasurer. It is still volunteer work and I am still fine with it.

I wanted to spend a month at Oinofyta in the spring of 2017, and I talked Art into going with me as part-time handyman, errand runner, shopper and cook for the volunteers. And my 37-year-old son James wanted to go too. "I have a privileged life and I want to do this," he told me. "Besides, Mom, it will be a great bonding experience with you." He will do whatever is needed at the camp.

Yesterday I talked to Lisa. While I am at Oinofyta in late March and early April, Lisa is coming to the US for two weeks for a couple of fundraising speaking events - one in Salt Lake City, the other in Boston. She asked me if I'd be willing to relieve her as project manager for the camp while she's away. I said yes.

So here I am, a 68-year-old retired woman, going to Greece next month to relieve a refugee camp manager for two weeks. Also at the camp are two extraordinary volunteer shift managers, half a dozen or so other volunteers from around the world, and 650 refugees in residence, mostly from Afghanistan. I speak no Farsi or Greek, but I am fluent in the language of compassion and care. I am trusting that will be enough.

I would NEVER have guessed I'd be having these experiences. When I thought about what I'd like to do in retirement, reading and travel came to mind. Not volunteering in refugee camps in Europe. I used to set goals and work towards them. Now I say yes to what comes along. So far I am amazed. And grateful.

What happened when I got afraid

I got afraid twice this winter.

As a political progressive, I got afraid when the new president started signing executive orders that were frightened me. It wasn't exactly the orders that scared me. It was the idea I got in my head that the checks and balances built into our Constitution wouldn't hold against a challenge. When the executive order pertaining to immigration got overturned by individual judges and then by a court of appeals, and the administration decided to take another look at it, I was relieved. Since then, the wild ride that is the new administration is something I keep up with, but it's now out of curiosity rather than fear.

That's the political fear. The other one is entirely of my own making.

I have health anxiety. Whenever any issue comes up around my body, I immediately think of the worst-case scenario, and then I run with it. Here's what happened.

Just before Thanksgiving I caught a bad cold which I took with me on a plane ride from Tucson, where we live in the winter, to Seattle, where we have our family home. After Thanksgiving, I brought the cold back to Arizona.

The next week I noticed I'd feel out of breath after walking a block or so. I had an episode where, after walking two blocks to our activities office, I had to stand outside the door for a minute while I caught my breath. That scared me. My husband took me to a nearby ER where I was diagnosed with bronchitis - though I didn't have a cough - and prescribed meds for bronchitis.

The meds didn't work, but the breathing issues improved somewhat. I did notice, though, that when I'd read out loud, or have a conversation, I would sometimes run out of air before I was done speaking. And then, when I did take a breath, there was a soft wheeze. Probably my post-nasal drip, I thought.  I tried to put it out of my mind. Instead, my anxious brain went to the worst cases: lung cancer, COPD, heart disease. And there I resided for two months.

I told myself it was because my health insurance is through an HMO, which will reimburse in Arizona only for Urgent or Emergent care. I thought I ought to wait until May, when we return to Washington, to be checked out.

Here's what happened in the meantime:


Finally, last week, I turned myself in to Mary Beth, the nurse practitioner at our resort. I already knew her from a shared activity. I told her what was going on. She said, "Yes, you have restricted breathing. I have noticed that for a while."

It was finally okay to tell the whole story. It felt like I'd gone to confession. Mary Beth took my history - including that my dad had tied of emphysema and cirrhosis when he was 57. She and I both noted that I have had my share of injuries - broken leg and arm and ruptured Achilles tendon - but that I have had few illnesses other than colds and flu.

Then she said, "I think you have asthma, but I'm going to run a few tests." I got a breathing therapy session that day and the next. It was wonderful, as I rode my bicycle home after the first appointment, to feel the whole new gymnasium of air now available to me in my own body. The chest x-ray was normal. Lung capacity was normal as measured by a spirometry test. Circulation was fine.

When Mary Beth told me the chest x-ray was normal, I was thrilled and exhilarated and told her so. "No, you do not have lung cancer or COPD. Your worry about this is part of your anxiety disorder." What a relief that was. Embarrassing, but a relief.

She prescribed me meds for allergy-induced asthma to knock down the current asthma symptoms, an inhaler, and meds to minimize the possibility of future occurrences. She told me I'd feel better in a week, and I believe her.

Here's the deal, though. My fear and denial kept me from making that appointment for six weeks. During that time I ignored or disregarded the concern of my friends. I avoided activities that wouldn't allow my denial to persist. And I spent a lot of time in my anxious mind - which is a dangerous neighborhood.

Yesterday I was talking to a friend, a retired nurse. She said, "Linda, I told you twice last year that I thought you had asthma. You said no, you didn't." So this must have been a developing thing. I don't recall having any symptoms last summer in Washington or on any of the eight trips I took. But maybe I did.

I have relatively few fears - health issues and falling from a height - but both have been personally limiting. It may be time for me to do something about them.

In the meantime, I want to make amends to the friends I disregarded. That's a first step, at least.

The Bag Lady thinks about past-present-future

I am pretty good at letting go of the past. I rarely worry or "what if" much about it.

I'm okay with present issues, too. Yesterday I had a long travel day, flying from Tucson to Salt Lake City and then to Portland, and driving south to Roseburg for three hours in the rain and dark in a rental car. I never know what will happen on a journey, but I'm usually okay. I don't assume things will go smoothly, and when they do it's a treat.

I am getting better at letting go of the future, but it still stresses me out sometimes.

So, with regard to these future things:
Tomorrow I go home, with another long travel day of driving and flying. I will set that aside until tomorrow, when I will live in the present, with my usual "take it as it comes" travel spirit.
Posted by Linda Myers at 11:47 AM 10 comments: