Did I get scammed?

My husband Art and I disagree. Here's what happened.

While we were in Tucson between November and May, we rented out our Washington house. The man was very reliable and the experience was positive on both sides. However, he had told us before he signed the lease that he was not a "yard guy". So, when we got home, the garden areas of our property had gone to tall weeds.

We didn't get around to doing anything about it until a couple of weeks ago. I knew we couldn't do it ourselves, and I didn't know anyone who did that kind of work. We do have landscapers who come in once or twice a year to prune and keep our plants healthy, but it seemed to me that what we were looking for was something different. Plus, the landscapers charge $50 an hour, which was more than I wanted to pay.

So two weeks ago, I watched as two men worked on the yard across the street, mowing and weedwhacking. I went over and asked them to come look at the work I needed done, and to give me a price.

They did. One of the guys, Mario, said the job would take two people three days, and he quoted me $700. He said that was an excellent price, that other companies would charge over a thousand. That seemed like a good deal to me, so I agreed to have them do the work.

Mario arrived this morning with truck and tools. He worked by himself all day - from 8:00 a.m. to about 3:30 p.m. He did everything he'd said he would do, and more: mowed areas I hadn't asked him to do; cleaned up downed branches and a side yard that hadn't been part of his bid; blew clean our driveway, sidewalk and porch. He really did a good job in those seven hours.

So I paid him about $100 an hour for the work. And I thought maybe I had been scammed, and I asked Art about it.

Art said, "Did he do the work you wanted done?"

"Did he do the work for the price he quoted?"

"Then what's the problem?"

Well, if Mario quoted me $700 for two people for three days, that's a good deal. But the same work for $700 for one person for seven hours? That was $100 an hour. Twice what I pay the landscapers.

So, did I get scammed, or did I just misunderstand?

What Grandma learned in London

I've taken this trip with my granddaughter Kai. It's a high school graduation gift. I told her and her twin, Ethan, that I would take them, one at a time, anywhere in the world they wanted to go as long as it wasn't hot, within a budget. Kai said, "I want to go somewhere with history and castles. And Iceland." So we spent two days in Iceland on our way to England, then a day at Bath and Stonehenge, then a week in London.

I don't know how much Kai learned in London, but I learned a lot!

1. It is easier to be part of a tour because you don't have to plan anything except for how you're going to spend your free time. Rick Steves tours are busy and interesting, with fewer than 25 people. When you ask your granddaughter what she thinks of the other people in the tour group, and she says, "They're interesting," you're surprised. But not really. 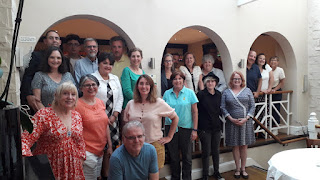 2. Your granddaughter may say she wants to see historical places, but her eyes really light up when she finds an open-air shopping opportunity. If the first thing that catches her eye is a leather skirt, but she finds out it costs 750 pounds, she can quickly move on to find a jumpsuit, blouse, shades and a hat for less than 120 pounds. And when she says to you, at the end of the day, "London deserves better from me than skinny jeans and a hoodie," you are impressed by her wisdom. 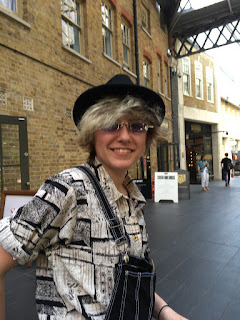 3. You may be able to find that perfect shopping opportunity when your tour guide has taken you there, but when you try to find it on your own the next day, you can't find a subway line that goes the right direction. This is especially true when your granddaughter is sure she knows how to get there, and you want to give her an independent experience, so you let her lead you onto trains that aren't going to the right places. And then you come back to your hotel and order fries and ice cream from room service.

4. If you hit the spacebar too hard when you're typing, you may drive your granddaughter to play MineCraft in the bathtub. 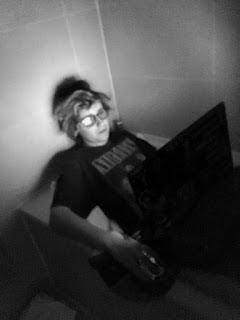 5. When you're getting around with your granddaughter in the city, she walks about 20 feet ahead of you, but she checks every few minutes to make sure you're still in sight. She is wearing a beanie or a hat, and mostly dressed in black, so it's not too hard to keep track of her. You've agreed that if you get separated you will either return to the last place you saw each other, or meet back at the hotel. You can almost always find each other.

6.  You may have wanted to see "Midsummer Night's Dream", but your granddaughter prefers "Phantom of the Opera". You may have seen it twice before, but she never has. And when she says, "I liked that" before you even ask, you know it was the right decision.

7. Even when you're 70, you can still walk between four and eight miles a day for a week. When you lie down to sleep at night you're pretty sure you won't be able to get out of bed the next morning, but when morning comes, you can. 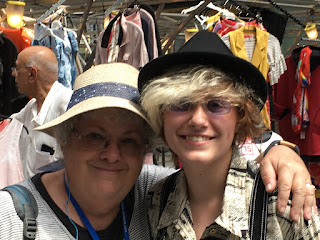 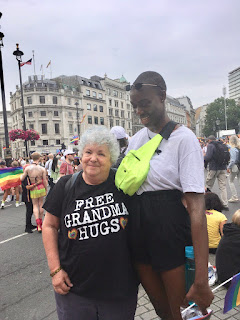 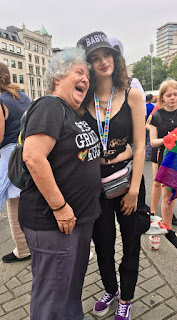 10. A week is about the right length of time to spend with your granddaughter in London. We learned to navigate the subway system and city buses and how to get to Trafalgar Square on foot from our hotel.  We saw the city by bus, Westminster Abbey, Buckingham Palace, St. Paul's Cathedral, the British Museum including the Rosetta Stone, the Tower of London and the Crown Jewels, an East End food tour, Windsor Castle (we overslept but needed the day off), the Churchill War Rooms, the South Bank of the Thames and the Borough Market, several pubs, and Shakespeare's Globe Theatre. When we were sitting in Heathrow waiting for our flight, we were both ready to go home. 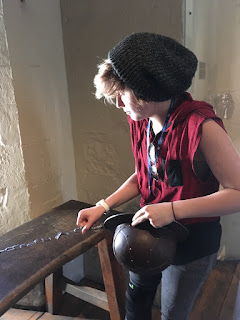 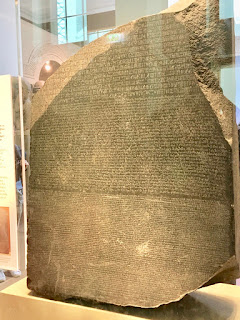 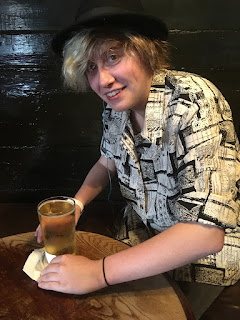 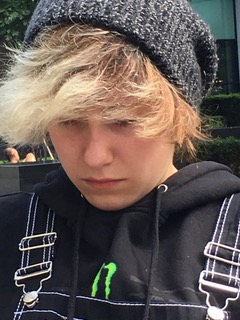 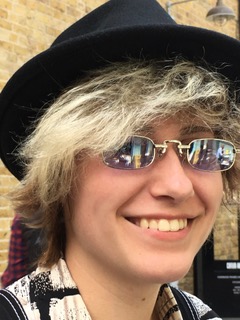