It's been a month since I last wrote a blog post. Usually that kind of a delay is because not much is going on. This time it's because so much is happening.

Art had his back surgery about seven weeks ago.

We are rehoming many things stored in the garage. I spent three days going through correspondence I'd saved:
We donated 15 cans of latex paint to Ridwell, a recycling organization we belong to. And Art will be contributing windshield washing fluid, antifreeze, three sets of snow chains, and other man things. He wants to be sure none of our kids wants them, but we only have one more kid to go through them.
I went through all the Christmas decorations. My older son was interested in "the ones we had when we were kids." I sent him pictures and he said yes or no. I have a box for him with about 20 ornaments and books. The rest I re-homed through Buy Nothing Brier, a Facebook group I belong to in my town. The leftovers went to Goodwill. I saved only four ornaments. I'll take them to Tucson and hang them on our little tree in the window this winter. 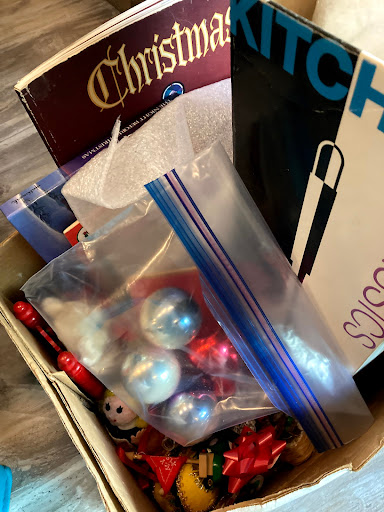 I contacted the Dispute Resolution Center in my county. I was certified as a mediator through them and wondered if they needed me, and they said yes. I was especially interested in small claims court, in which I've mediated many times. These mediations are currently being done on Zoom, so I said I'd log in next Tuesday as an observer to see how it's done, and then sign up. Small claims happens once a month, and I can do it remotely, from Brier or Tucson. The lady told me that when the rent moratorium expires, the State expects to be overwhelmed by court cases, so people will have to go through mediation before appearing in court. That will also happen on Zoom. It sounds interesting to me, so I'll attend one online training session before I start that. I love mediating - I've been doing it as a volunteer for over ten years, plus I use it just about every day in real life.
And then there's this story. A friend of mine has a son who's a drug addict living on the streets. One day last month she saw some unhoused people near where she knew her son was living. She showed a couple of them his picture and asked if they knew him. One man pointed at someone lying in the dirt nearby, sleeping, and said, "that's him." My friend walked over to her son and lay down on the ground beside him. She asked him if he'd like to come home and get some food and take a shower and he said yes. Later that evening he decided he wanted to get clean, so she found a detox center for him, and she and her husband drove him there. The son was there for four days and then transferred to an inpatient treatment center. My friend sent him a box of clothes, and a week later the package was returned. The son had left the treatment center after three days and returned to the same location on the streets. This happens a lot. The image I keep in my mind is my friend lying down in the dirt beside her son. I am filled with admiration for her courage and her love, and grateful to have such friends.
All the things. After five months of being Art's advocate and caregiver, I am gradually reentering my life in the world.
And, three weeks from now, I'll have my hip replaced in a day surgery. Once I've recovered from that, I'll be able to ride my bicycle and walk my neighborhood or further. Maybe even hike in the desert this winter.
Posted by Linda Myers at 6:41 PM 4 comments: