My husband Art and I recycle just about everything. He's been known to go through the kitchen trash can in search of items that I've neglected to recycle. One of his endearing qualities, I guess.

At our family home in Brier, Washington, we've been customers of Waste Management Northwest for decades. We have the largest yard waste bin (green), the largest recycle bin (blue), and the smallest trash bin (gray). Art takes pride in rarely having a full trash bin on Wednesdays, when the Waste Management truck comes by at 7:00 a.m. or so.

For the last year we were in Tucson and one of our sons rented the house. We paid the trash bill each month. Then, in May, we started the remodel of the lower level of the house. Son and family began renting the upstairs only.

In September the remodel was done. We flew to Seattle to spend a couple of months setting up housekeeping. We ordered what we needed - from Amazon, Bed Bath and Beyond, Overstock, Wayfair and other online places - and the boxes began to arrive. We had a lot of boxes to recycle. A lot. We left them at the bottom of the steep driveway, nested. We knew we could leave them at the curb, broken down next to the recycle bin, which was full of everything else to be recycled. Eventually someone took them to the recycling facility at the Lynnwood dump because it would have taken a month or so to get all those boxes to the curb.

One difference between us and our son is that we recycle everything, and they usually don't. So the gray trash bin was full two days after the truck had come by. Full as in the lid wouldn't close. Full as in the crows got into the topmost trash bag, broke it open, and scattered trash and garbage and broke a bottle when it fell to the ground.

So I called Waste Management Northwest and explained our problem. The very nice lady said that, for $9 a month, we could have a medium-sized bin for the trash. "Leave the bin out as usual on Wednesday," she said. "Later in the day another truck will come by, take your small bin away and leave a larger one." That was great, I thought.

The next Wednesday we put out the bins. The gray trash bin got emptied, but no truck came by to leave something larger to replace it. That afternoon I got an email from Waste Management, apologizing for not leaving a new bin, and telling us it would happen the next week, and thanking us for our patience.

The next Wednesday, the same thing happened. No new bin, email of apology, promise of next week.

By this time we were up early on Wednesdays, listening for the trash truck. As soon as we heard it drive off, one of us raced out to the curb in our pajamas with a couple of bags of trash. We had asked our son and his family if they would please recycle what they could, and they said sure. So, of course, the recycle bin was full within three days after pickup. So on our Wednesday races to the curb, we carried all the broken-down boxes to go into the recycling bin.

And the next Wednesday. I finally called Waste Management Northwest and asked what was happening. I got a different lady, who was also very nice. "There is a shortage of bins in the Pacific Northwest," she said. "With Covid, and so many people working from home, they all needed bins, so we ran out. And the manufacturing plants couldn't keep up because so many of the people who worked there were sick."

And then, the next Wednesday - two weeks before the end of our trip to Washington - a larger trash bin arrived at the curb.

You would think that, with one family living upstairs and another one living in the new apartment downstairs, the biggest problem would be sharing the laundry room. But it was easy. We had Tuesday, Thursday and Saturday, and the upstairs people got Monday, Wednesday and Friday.

We also had to teach Amazon, FedEx, UPS  and the meal delivery services how to find us. Our address on all of them said, "Lower level, right side of house." Apparently the delivery people didn't read the second line of the address. At least twice a week, one of the upstairs people came down with something that had been delivered to their front door. They were good sports about it.

But I'm thinking they were mighty glad when we got on the airplane for Tucson! 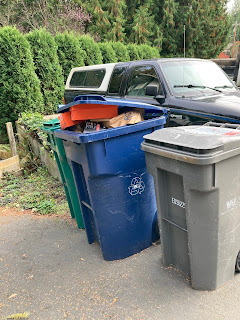