Last Friday I ran seven errands for the first time in years. I've gotten into the habit of shopping online for just about everything. And my husband Art does the grocery shopping. And I have a bad knee so I'm not inclined to be out and about.

But Friday! Quite satisfying, and a reminder that getting out there can almost be a fun adventure.

Stop #1: Michaels. Art's father and aunt bought a house on Samish Island, Washington, at the mouth of the Samish River, at about the time Art graduated from high school. The place was a gathering spot for decades of siblings and cousins and other family. We've got a matted and framed print of the place. I don't remember where I found the print, but we had it on a wall when we lived upstairs. I found a good spot for it in our downstairs apartment, but the double mat had gotten wet, so I had it redone at Michael's, to honor Art's great memories of family times. Yesterday I picked up the newly-matted print. It looks pretty good. 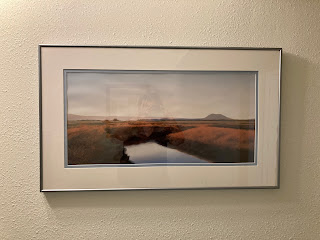 Stop #2: PetSmart. Larisa the Designer Cat went to the groomer for a teddy bear cut, but when she came out she had a lion cut - nearly shaved. The groomer said she had fleas so he'd had to cut her fur shorter. He sold us a flea cream to be applied once a month. The next day, Art went to PetSmart and bought a $70 flea collar. When I read the instructions I realized the collar did about the same thing as the cream, so if Larisa wore the collar she'd get too much of the medication. So I returned the collar.
Stop #3: Kaiser Permanente Lynnwood Medical Center. Last week I had an MRI for a soft tissue issue on my foot. It will need to be treated, but we're leaving for Tucson next week, so the work will have to be done at Banner Health in Arizona, which has a contract with Kaiser for snowbirds. I asked my doc if they could send the results to Banner, but they said I'd have to come in and sign an authorization for my medical records to be released. So I stopped by and found out how to get the process started.
Stop #4: UPS. I've been doing a lot of buying this summer, mostly clothes for me and Art. Of course I've been doing returning also. Walk into UPS, drop the package on the counter, get the receipt, walk out. Starbucks is two doors down, and a great shoe store is right next door, Massage Envy right next door on the other side. Almost every time I go into UPS I go straight to my car. Almost every time.
Stop #5: Dry cleaners. One pair of new pants is about five inches too long, and the lady who usually alters my clothes has grandchildren visiting. The dry cleaner costs more, but I'm leaving for Tucson in a week and need the pants to be done before then. I drew the curtain around the tiny changing area and wrestled with the shorts I took off and the pants I put on - it's a wrestle because I have a bad knee, so I have to lean against a wall to get the changing job done. Pants got measured and pinned up and it was back into the changing cubicle.
Stop #6: Grocery store. But not for groceries. They have the closest ATM machine to our house, and I needed the cash to give to my son Russell. He lives in Eugene, Oregon, but is taking the train tomorrow to our house, where he'll pick up our Honda Accord and drive it to Tucson for us, loaded with most of our stuff and two e-bikes. I have done the drive in three days with a friend, but that would leave Art to go through the Seattle airport with Larisa in a crate. Neither of us has any desire to drive for three days with a cat. She would hide under the bed in the motel room. It's easier to pay someone to drive for us and for us to fly.
Stop #7: Gas station. Russell needs a full tank to start his drive. I didn't look at the price of the gas. There's nothing I can do about the cost, so I don't allow myself to get annoyed by it.
I remember, when I had kids at home and a full-time job, and even after everyone was grown and gone and I was retired up until the Before Times ended, running errands was a frequent necessity and mostly a nuisance. But Friday, as I emerged from my recliner and set aside my laptop to grab my keys, purse, cat collar, unwanted clothes and too-long pants, it was almost a treat to be out and about again.