Now that my husband Art is older, Washington State's climate in fall, winter and spring is troublesome. For one thing, he has allergies too many to name. Just about the only thing he's not allergic to is Larisa, our Designer Cat, who is hypoallergenic. For another, he has arthritis when there's a lot of moisture in the air. On those days, he mostly sits and reads or watches TV and I think he's going to become one with the sofa.

Arizona is a different story. Once he's been here for three days, the arthritis melts away. Art feels no pain and his "worker guy" persona comes to life. In less than two months, he has finished his chores and everything on my "honey do" list. It has been a remarkable thing to watch.

His first challenge was participating in the removal of the javalina living under our park model. The "javalina whisperer" worked with us for a couple of weeks, in person and via text. Art found it necessary to drive to Ace Hardware for a headlamp and a pair of knee pads just in case. He didn't need them for that project, but they were required the day he crawled underneath the animal-free zone to repair the dryer vent.

We had a palo verde tree on our back property that had grown so large that its limbs were scraping on our metal roof. 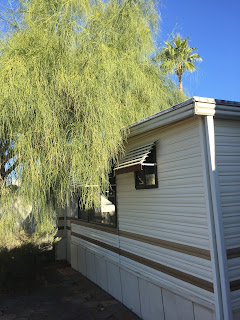 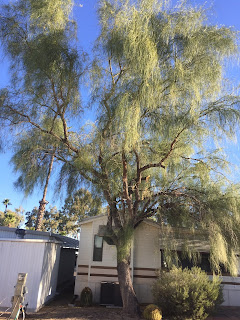 It also shed needles, to the annoyance of the neighbors. Our summer care guy said he didn't want to keep us as customers because of the tree. The park said removal of the tree was our responsibility. So we got four estimates ranging from $350 to $1200. Then we flew home for Thanksgiving.

When we got back, I encouraged Art to call the tree guys to come out, but he wanted to make their job easier. He bought a stepladder at Ace Hardware, and a set of new saw blades for his little electric saw. I came home one afternoon and saw that he had climbed the ladder into the tree, and then climbed the tree into the high branches. Art was an electrical lineman when he worked, but he was older now, and a bit out of shape, and without a hardhat or a spotter. I said, "It scares me when I see you do that." He said, "Then go in the house." My neighbor Dellann was just as worried. She said his risk-taking behavior was causing her blood pressure to go up!

Art limbed the tree on two days, then called the tree guys. They came out. Art decided to stand on our metal roof to supervise the cutting down of the tree. He has a pretty good eye for how and where to cut so the branch falls in a safe place rather than on the motorhome 12 feet away. While he was on the roof, he swept. I stood in the driveway with my cellphone, listening to the screech of the metal shingles, ready to call 9-1-1.

The palo verde tree in the back yard taken care of, Art turned his attention to the palm tree in the front yard. For the five years we have lived here, Christmas lights have been wound around the trunk. None of them worked. I had asked Art to either fix them or take them down, but he had other things to do instead. But now that he had a ladder - and three strings of solar lights I'd bought after Christmas last year - he spent an hour or two on the ladder taking down the old and putting up the new. This time I stayed inside and didn't look.

If we put a bag or a box on the floor, our cat Larisa gets into it. We call it a "cat trap". If boxes of unassembled furniture are dropped off by UPS or USPS or Fedex, Art opens them and begins to put the contents together. I call that a "man trap". It happened twice this month; I ordered a TV shelving unit and a new dining set. Art put them both together with nary a curse word. So I knew the directions were easy to follow and all the parts and bolts and washers were included in the packaging. And now I have just want I want in the Arizona room and in our little dining area. 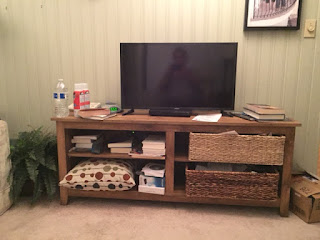 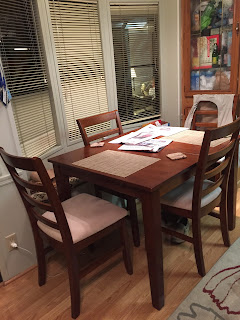 I used to say that Art could fix anything. In Arizona, he still can. There is nothing like a dry climate!

In March I am going back to Oinofyta, the refugee camp in Greece. This time I am going for a month, and I am taking Art with me. He will be part-time handyman, driver and shopper and dinnertime cook. All things he loves to do. He will be very appreciated by people other than me.

The whiteboard on the fridge is blank now. Art has completed every task. Maybe now he can read his book in peace.
Posted by Linda Myers at 5:09 PM 11 comments:

We’re in Tucson again, year five, for the winter. This time we arrived on November 4th. Longer each year, it seems. But we have no plans to move here permanently. We are Washington people!

Since we got here we appear to have dislodged the javalina who’d made a home under our park model. We’ve successfully removed a palo verde tree that, while beautiful, was a nuisance to the neighborhood with its messy needles and plentiful pollen. Art was delighted to be able to climb the tree to limb it before the professionals came in, and to supervise those pros from the roof.

At home, we had a full house for most of the year, but that is changing. My sister Alyx and her husband Virgil found a place of their own in Snoqualmie – a rural house with plenty of room for their cats and chickens. They moved in November after two and a half years in their RV in our back yard.

And Peter, Art’s son, will be graduating from nursing school in March, taking his boards and then, he hopes, finding a job and a place of his own.

It will be quiet with just Art and me and the cat again. And more work for us, since we’ll be responsible for the garden after two years of other residents tending it. We were spoiled with good organic vegetables grown on our property but produced by others.

Here in Arizona, Art had a leading role last March in the Voyager’s production of Oklahoma! Our winter last year was scheduled around his rehearsals. Art’s daughter Laura and son Peter flew in for the production, which delighted Art.

Summer was full of travel. I flew from Seattle to Tucson in May to go to the dentist in Mexico. I needed a root canal and a crown, and even with the airfare the cost was half of what it would have been in Washington.

In June Art and I took a road trip ending in Bend, Oregon, at a family gathering planned by Art’s daughter Melissa and son-in-law Scott. We especially enjoyed a moonlight canoe outing.

I took solo trips to Muskoka, Ontario to visit my friend Judy; to Chautauqua, New York for a fascinating week themed “The Future of Cities”; to Oinofyta, Greece to volunteer for a week at a refugee camp; to a five-day writers’ workshop on Vashon Island, Washington; and back to Oinofyta for two weeks in October.

Art and I flew to Maine in September for yet another cruise on the Schooner Heritage.

Now, back at the Voyager, it’s not even high season yet, but already Art is busy with rehearsals for this year’s Evening of One-Act Plays. I’m helping out as assistant producer.

In late March I’m planning to return to the refugee camp in Greece for a month. And Art will be coming with me. He’ll be very useful as handyman, driver and shopper/cook.

We’re wishing you all a Merry Christmas!

A bunch of good things

It's been nearly two weeks since my last blog post and nothing large has happened. Just a bunch of small things.