Here in Arizona, javalinas are part of the native wildlife. Here's what they look like. 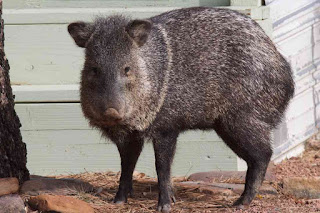 They are a collared peccary, most closely related to pigs and hippopotamuses. We think they're both cute and ugly, probably because Bud, our potbellied pig who lived nearly 19 years, was also both cute and ugly.

A month ago we got a text message from Bob, our summer care person. He said, "I think you have a javalina living under your park model. I will keep an eye on it." The reason for his suspicion was a torn place in the skirting at the back of our park model. Bob and his wife Sue boarded up the tear and used a couple of cement bricks to hold up the board.

Two weeks later, just before we arrived in Tucson for the winter, another message from Bob: "They are back. Best give me a call." He included a photograph showing the animal had broken through the barrier. Strong and determined javalina! 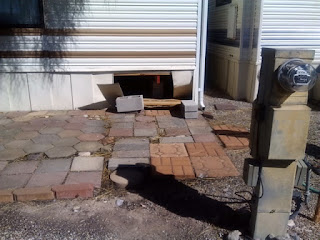 Art repaired the tear in the skirting and boarded it up. 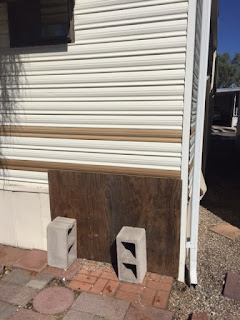 The next night the javalina broke through the skirting along the side of the park model. 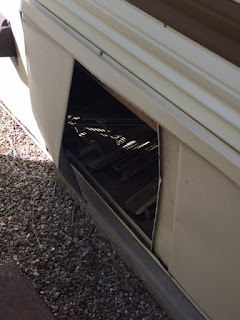 This skirting was boarded up and the javalina broke through another spot in the back. By this time it felt like a chess game between the javalina and us. We felt a grudging admiration for its tenacity.

We called a wildlife animal expert to discuss next steps. Mark came out, crawled under the park model, and confirmed he'd found the nest but that the javalina was not in residence at the moment. He laid down red pepper just outside the park model. The next morning, javalina tracks leading to the park model confirmed the animal had returned but had not been deterred, as there were no departing tracks.

Mark came out again. He taped strips of plastic to the opening in the side of our place; we'd be able to tell whether the javalina came through them, and whether they were coming or going. 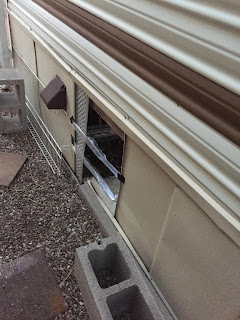 The answer was "both coming and going", as we discovered. Each morning the lowest strip of plastic was torn away. Sometimes the strip was torn inward and sometimes outward.

Mark came out yet again. He installed strobe lights beneath the park model. He'd had success getting raccoons out of attics with this approach, though he'd never tried it with javalinas. Apparently the javalina didn't mind the flickering lights!

By now we were seriously considering the possibility the animal would have to be trapped and relocated. I contacted the park manager and presented our case as one of safety for older residents. He agreed to pay for the relocation. I called Arizona Fish and Game to get approval for the relocation; javalinas are a protected species in Arizona and Mark told us we'd need to get permission from them. We did. The Fish and Game guy suggested Mark send away for mountain lion urine, but Mark convinced the guy that we'd been dealing with the issue for long enough.

Mark asked us to put out some food so we could see what the animal was eating this time of year, so he could bait a humane trap with something that would be attractive. We  bought a small pumpkin, a carrot, an apple and a potato - and added half an avocado from the fridge.

That night? None of the strips were torn away, and none of the food was eaten.

The next night? Same thing.

The next morning we left for Thanksgiving week, and we're still away. I'm hoping the javalina has decided to take up residence elsewhere.

Thoughts on this experience:

Abdul tells me his story

Abdul and his wife and daughter live in Room 24 at Oinofyta refugee camp. They were our hosts for dinner last week. 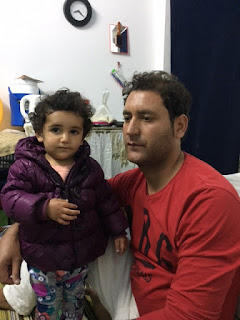 I met Abdul when I volunteered at the camp in August. I remembered him because he was one of the tallest men, and because he carried his daughter almost everywhere he went, and because he has a beautiful smile.

I have heard the stories of some of the residents of Oinofyta, but not his. I was curious. Abdul is a tailor by trade, so I figured he hadn't left Afghanistan because he'd worked for the U.S. government and was now in danger. Last Monday I asked him if he would tell me his story. In August, Abdul didn't speak any English, but by early November he spoke enough for basic communication. He told me he would come the next day and bring a translator.

Abdul showed up on Tuesday afternoon but I had another commitment. I asked if Wednesday would be okay. He said he would be in Athens with his wife for a prenatal doctor's appointment, but that he would be back by 5 p.m.

He was. And he brought Ali, another resident and a translator, with him.

The three of us met in the computer lab. Abdul and Ali sat on one side of the table and I sat on the other. Abdul's first words, through Ali, were, "If I tell you my story, can you help me?" I had talked and laughed with Abdul before, but across the table his eyes were grave and his face more serious than I had ever seen it.

I took a deep breath and chose my words carefully. "I cannot help you with money, and right now I cannot help bring you to the United States." I told him that right now there is a lot of fear of Muslims in the US because of 9/11 and subsequent terrorists attacks around the world. "I know it is not right to be afraid of an entire group of people because of the actions of a few, but that is how it is."

I continued. "What I can do is tell your story. On my Facebook page. In my blog. In conversations with people I know and people I have just met. In interviews, if they are requested. Often people think of Muslim refugees and immigrants as a mass of blurred faces, a large and anonymous group. Not people they know, with faces that remain in their minds. I can make you real. And sometimes, in the United States, if enough people get together and express their opinions and their convictions, the government will change its mind. That is what I can do for you."

There was a moment of silence. Then Abdul said, "I will tell you my story."

Abdul is 29 now, and his wife is 16. "My wife's mother died of cancer when she was two. And her father was kidnapped when returning from Pakistan to Afghanistan, and we do not know whether he is alive.

"My wife had a brother who was in the army for the government. It was a dangerous job but jobs are hard to find. One day he was coming home from work and my wife was watching him. All of a sudden a man appeared and shot my wife's brother. The bullet went in one side of his torso and came out the other, and he died. My wife was an eyewitness so the man was caught. There was a trial and he was put in jail. But he bribed someone and he was released from jail."

Then Abdul said, "So the man was looking for my wife. We borrowed money from family and friends and left Afghanistan."

When I asked Abdul to tell me his story, I expected he would tell me about the journey from Afghanistan to Greece. All I know about that, from a previous brief conversation, was that part of the journey was in a large kayak where everyone was standing and he was holding his daughter in his arms. What Abdul wanted to tell me was why he left.

Abdul told me that his wife, now seven months pregnant, needs some blood tests as part of her prenatal care. "I have no money to pay for it."

Then Ali added, "When my son was born three months ago, my wife was in the hospital for five nights. I slept on the streets." He continued. "In Afghanistan, I had a nice house and two cars. Now I have nothing. I am not the same man."

I said, "Ali, you are the same man now as you were then. The only difference is that now you have no money and few possessions." I added, "And the only difference between me and you is that you were born in Afghanistan and I was born in the United States."

I cannot give money to the residents. As I told one once, "I can give you my time, and my listening ears, and my voice, but I cannot give you money." There are many generous donors and I imagine there may already be a fund for prenatal care. But I didn't know of one, so I couldn't tell Abdul about it.

Then Abdul asked me this question: "If I get to the United States, will there be refugee camps there?"

I told him no, that in many communities in the US there are organizations that help refugees get settled. I talked to a coordinator of one of them, in Seattle. He said, "We have resources to help once the refugees arrive." I said, "How do they get there?" He said, "I have no idea."

I have no idea either. I just know that Abdul is just one man in an Afghan refugee camp. He has a story, and he has a dream. And Ali is another man, and he has a similar dream. To be able to move from the refugee camp, with its tiny rooms, to a permanent home where a man and his family can be safe, with a good life.

Two days ago I got an email from a journalist writing for a local online newspaper in my county. She wanted to interview me about my volunteer work in Greece. I said yes, I would meet with her, but I didn't want the interview to be about me. I wanted it to be about a resident of Oinofyta. That afternoon, over coffee at Starbucks, I told Oinofyta's story. And Abdul's story, and Ali's.

I will keep telling the story. My hope is that, several years from now, Oinofyta and all the other refugee camps in Greece will be closed down because all the refugees will have moved on to permanent places and safe lives.

So Abdul and Ali and I have the same dream. We are all in this together.
Posted by Linda Myers at 3:00 PM 13 comments: