The Bag Lady is mortified

I've had a housekeeper every other week for the last 29 years. At first, I was a single mom raising two boys. My first housekeeper was the mom of one of the other kids on my younger son's soccer team. Kathy spent her housekeeping money on the care and feeding of her three horses. Kathy kept my first Washington house pretty well maintained.

Then, for three years, right after Art and I moved to a bigger house to accommodate all of our children - the ones who lived with us and the ones who visited on Tuesdays, Thursdays, and every other weekend - Art's daughter Melissa was our housekeeper. Her husband was deployed in  Bosnia and she was taking prerequisite classes for pharmacy school. She studied and slept in our motorhome at the rear of our property, and, for her room and board she cooked twice a week and cleaned our house once a week. Melissa was fabulous and conscientious.

Then we found another housekeeper, Jenny, who still keeps our house in order when we're home in Seattle. I met Jenny through the church we both belong to. She is a single mom wanting to work just part time.

Seven years ago we started spending our winters in Tucson, living in a 55+ community, in a park model (trailer). Our place here is much smaller than the one in Washington - just 620 square feet. Still, after a few weeks of keeping it clean myself, I put a "housekeeper wanted" ad on the community bulletin board. The next morning I got an email from a man who'd read my request. He said, "Contact Ana. She and her sister Isabella have been cleaning for me for several years. They are wonderful."

So I emailed Ana. She said she and her sister would be at our place the next Tuesday at 2, if that was acceptable. I said of course.

Ana and Isabella are a powerhouse housekeeping team. They arrive on time, every time, dressed in pretty matching blouses and slacks. We exchange pleasantries - in English for several years, since I didn't know Spanish - and they get to work. There is no chatter between them. They bring our little place back to clean and orderly in just over an hour. Sometimes I'm there when they arrive and leave, sometimes not. We see Ana and Isabella every other week between early November and late April. This is the seventh year they have been our housekeepers in Tucson.

This season I have been volunteering on Saturday evenings at a refugee shelter. Between listening to the Spanish speakers at the shelter and spending a few minutes each day online with Duolingo, I have now been described as a "pidgin Spanish speaker". I can string words together and, while often not grammatically correct, can usually make myself understood by our guests at the shelter.

Last week, when Ana and Isabella arrived at our place, I greeted them in Spanish. I told them I was excited to be able to use the language, even if not very well. I had told them last year I wanted to learn Spanish, but this was the first time I had used it with them. They were as pleased as I was. I told them I volunteer at the refugee shelter at St. Francis in the Foothills. Isabella said she might be interested in helping out, and I told her to give me a call if she wanted to find out more about it.

Last night we arrived at the shelter for our 5-to-9 shift. A smiling woman with long dark hair gave me a hug. I knew I had seen her before, but I didn't remember where. She said, "Do you remember me?" I hesitated. She said, "I'm Isabella."

This woman had been at my house 50 times in the last seven years, and I didn't recognize her out of her work clothes, with her hair down instead of pinned up. I was mortified, and said so. Isabella smiled and said, "It is not a problem."

Then Diane, the refugee project coordinator, said "Isabella arrived this afternoon with two of her boys. She has saved my life today with her work and her Spanish interpreting. And her boys have played all afternoon with the children here, teaching them English and how to play Uno. I really hope she will come back often."

Isabella stayed for an hour longer and we talked. Away from her work, she is a vivacious woman, interacting with our guests the other volunteers with ease. She and John, another regular Saturday volunteer, agreed that she would help him with his Spanish and he would help her with her English.

I knew that Isabella was a young widow with four sons, and that she had come to the US from Mexico.

I didn't know - until last night - that in Mexico she had been a social worker.

Isabella said that in order to work in her field here in the US, she has to pass a difficult English test. That is her goal.

I pride myself on knowing the people in my life. How could I have missed this for seven years?

You probably know why. I had stereotyped Maria and Isabella.

Mortified. I have volunteered at a refugee camp in Greece five times. I spend every Saturday evening at a refugee shelter in Tucson. But in my own home, I had been oblivious.

I deserve to be mortified. Such a lesson. I hope I have learned it well.

What's going on in the borderlands?

Art and I continue to volunteer on Saturday evenings at a refugee shelter in Tucson. This article, sent to me by a friend, gives the best description I have read about what's happening there.

I haven't attended a church service since we arrived in Tucson on October 31. But after four hours on Saturday evening, at St. Francis in the Foothills Methodist Church, I feel like I have been to church. Truly, it's about love and service.

I never had a master plan

As I look back on my life so far (the first 70 years), I'm aware that what's led me to this point has been largely unplanned. Here's what I mean.

1. My father was a military officer, so we moved around a lot. I was pretty much an obedient daughter - expected in the military environment - interested by nature in academics, music and theatre. The closest I ever came to a life plan was "I'll go to college and then get married and have kids."

2. I was accepted as a high school junior to the College of William and Mary in Virginia, when my father was stationed at Camp Lejeune, North Carolina. I wanted to go there, but my father was then transferred to Camp Smith on Oahu. My parents thought 5,000 miles was too great a distance between my college and their home. My mother had been a Marine during World War II, stationed at Santa Barbara. She said it was a nice place. I applied to UCSB, and that is where I spent my four years of college.

6. I got remarried and acquired six more kids. Part of the REVISED plan.
7. I retired after working for 25 years. Part of the plan, though in my heart of hearts I couldn't imagine such a thing without more than a twinge of worry and fear. That's when I started my blog, "Thoughts from a Bag Lady In Waiting".

8. As a retiree, I could choose how I spent my time. Part of the plan, though I had no idea at first what I would do other than sleep as long as I wanted in the morning and read a lot of books.

9. I said yes to what came along, but only since I turned 60. Before that I was pretty much still the military officer's daughter. Here's what's come along since I started saying yes: 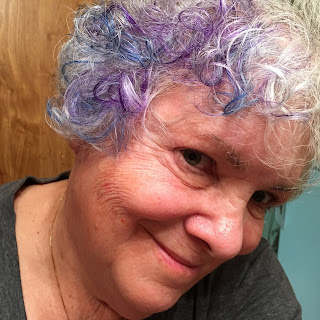 But I feel especially blessed and lucky. No master plan. But it's all worked out to be more than I would ever have imagined.
Posted by Linda Myers at 12:26 PM 9 comments: