It happens now and then. I have a bad day. I'm an optimist by nature, but every now and then the stars do not align.

Yesterday was that day. Here's what happened:

As I look at this list, I realize I may be cranky. That doesn't happen very often. None of the issues in the list are a major deal. But there are more issues than usual. I suspect it's because since I got home from Greece two weeks ago, I've been quieter than usual. When I was working in the refugee camp I was in near-constant conversations, with very little down time. Now I am taking that time. And the world is interrupting me.

Breathe in, breathe out. Be grateful. That's what I'm telling myself.
Posted by Linda Myers at 8:41 PM 20 comments:

Found in Translation: making the connection

I speak no Farsi, the primary first language of residents at the Oinofyta refugee camp. And most of them speak no English. Fortunately, there are some people there - mostly men or children - who speak both. Some of the men worked for the U.S. in Afghanistan as translators. And the children at the camp have picked up English quickly, as it is the common language of the volunteers.

So there is usually someone around who can help the rest of us understand each other.

One Friday evening I was speaking to the residents, through my translator Kakar, at the weekly community meeting. If residents have been accepted as registered in the camp by the Greek Ministry of Migration, they get cash cards via the EU through MercyCorps, which provide them enough for basic sustenance. If they haven't been accepted as registered - which is the case for residents who have arrived at Oinofyta in the last four months - they don't have cash cards.

No one knows why registration is not happening. At the present time there are 63 residents without cash cards. Do Your Part is the American nonprofit I volunteer for, and we feed the 63 residents.

At the community meeting, residents asked about the cash cards, as they had at every community meeting for the last few months. And I told them there was nothing we could do, but that as soon as we knew something, they would know something. I hated saying the same thing the residents had heard multiple times before. I felt like I was a part of the problem, even though I knew I wasn't.

After the meeting I asked Kakar to help me continue the conversation with a group of eight women sitting together at a table nearby. The women were older residents. Their faces were familiar to me, but I had not spoken to them before.

"How many of you receive cash cards?" Four women raised their hands.

"And how many of you do not?" The other four.

After a few minutes of listening, I said, "Kakar, please translate for me, sentence by sentence."

I added, "But I am not the queen of the world."

The women nodded and laughed. Through the words of the translator, they heard me, as I had heard them.

The next afternoon, the women were sitting at a picnic table outside in the late afternoon sun. As I approached their table, they smiled and gestured me to join them. Sumaya, an 11-year-old girl, was standing near her mother. This time, she was my translator.

The women asked me their first question. "How old are you?"

I was the only woman with gray hair, but every other face at the table was lined and worn.

The second question: "How many children do you have?"

"Eight," I said. "How many do you have?" Around the table we went again. I had the largest number of children. "But," I said, "I have had two husbands." Everyone nodded. For some reason, that made sense!

The next day, one of the women brought me a flat loaf of warm bread. Delicious, fresh from the oven. And the next day, a different woman, the same wonderful bread.

From that day until the day I left the camp, when I would meet one of these women, we would exchange the greeting of left cheek kiss, right cheek kiss, left cheek kiss. And from the lined, worn face, a pair of bright eyes would smile at me.

I've been to Greece four times since August of last year.  Each time I have volunteered at the refugee camp in Oinofyta, about 45 minutes north of Athens. But this is the first trip when I've spent any time in Just Greece.

For the last five days my husband Art and I have been staying in the village of Pyrgos on the island of Tinos. We took a four-hour ferry ride from the port of Rafina, near Athens, then rented a tiny car for a 45-minute drive on winding roads to get to Pyrgos. For the first three days we didn't leave the village; we slept and ate simple meals and slept some more. We absorbed the quiet of the island as we let go of the energy and activity of Oinofyta.

Tomorrow morning we leave Tinos and return to Rafina for an overnight before our 6:00 a.m. flight out of Athens on Tuesday. We are ready to go home, refreshed and relaxed after our nearly six weeks away.

Here's what I learned in Greece this time: 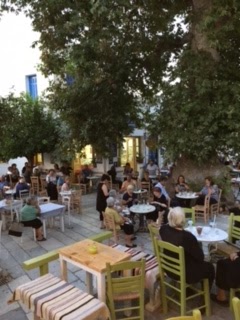 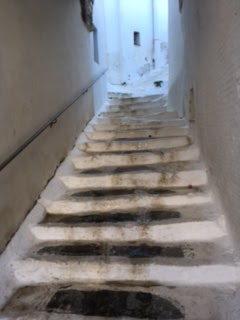 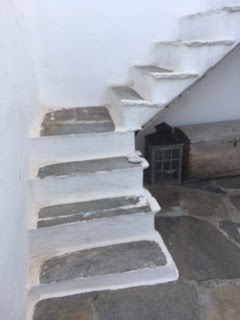 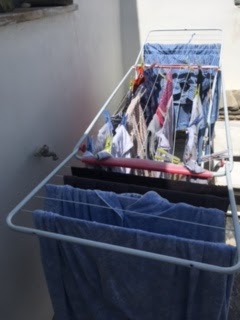 In two days my husband Art and I will leave Oinofyta, the refugee camp where we have been volunteering for the last 31 days. We'll take a ferry to the Greek island of Tinos, where we'll relax and recuperate for a week before flying home to Seattle.

So it's time to say goodbye. Again.

In Dilesi, the village on the Aegean where we live, I'll say goodbye and thanks to "the Pakistani guy" who runs the minimarket and patiently installs every data chip I need for my phone without asking for my passport every time. He knows I'm part of Lisa's team. I may stop at Katarina's restaurant and say thanks to her and her family who have welcomed us several times a week for an excellent Greek meal. I'll stop by the coffee place where they knew my drink (cappucino fredo with a sprinkle of chocolate) after three days.

At camp, we've been invited for lunch again by Amir, who lives in tent 49. He's from Iran and speaks very little English, but he's fed me three times in the last month. We sit on a blanket on the floor of his tent as he brings us bowls of food with high fives. He shows me pictures of his wife and son on his phone. He tells me his story. He was a trainer in the Iranian army, but he's not a Muslim, so he had to leave.

I'll have a chat with Elias, a welder in Afghanistan and also here in Greece. I met him first when he came to see if his glasses were ready. An optometric group was here at camp just before we arrived last month. Over a hundred pairs of glasses were ordered for residents, and Elias' were late. He came after work every day for a week to ask if they had arrived. When they did come, he thanked me with face lit up when I handed them to him - as though I'd made them for him personally. Yesterday he brought a finished piece of artwork to show me: a peacock made from rolled paper. A truly unique, beautiful creation.

I'll exchange a handshake with Esmatulla, an older man who returned from Serbia recently with his family. When he sees me he says, "I am fine, how are you?" and then he laughs, knowing he's deliberately delivering a backward greeting.

I'll kiss several women (left cheek, right cheek, left cheek) as I give them a hug and say, "Salam". I have had conversations with them, and we all remember.

At least half a dozen residents will knock on the door of our office trailer for one reason or another - a noisy neighbor, maybe, or a pair of shoes they really need from the warehouse even if it's not their day to shop, or a request for an extra room because, after all, they have a large family, or to ask whether mail has come for them from their sister in Switzerland. I may need to ask them to find a translator or I may be able to figure it out on my own using gestures and a smile. They may not know we are leaving, but that will be all right. I will carry their faces along with me anyway.

I'll probably hug or shake hands with the volunteers who are staying on, thanking them for the great gift of their time and talents.

I'll visit Oinofyta Wares one more time and maybe buy another of their custom bags, the kind with a long shoulder strap. I'll say goodbye to Sam, our long-term volunteer who runs the enterprise, and tell her to go home by 8 p.m. every night before she wears herself out - even though I know she'll ignore me.

I'll find Lisa. She'll be in the office, or in the computer lab, or in the shade space smoking a cigarette with her phone in her hand. I'll tell her we're leaving and she'll make an ironic comment of some kind and she may get a little teary eyed. I will tell her how grateful I am for this piece of my life and she will thank me for what I am doing, and we will probably not hug, but we will both know how it is to work together and to know each other. And tomorrow I'll greet her on Facebook in the morning and the evening, as I have done for months, and she'll tell me she doesn't have time to chat, or maybe she'll vent a little about the aggravations that come along with the job she's doing. And, once again, I will say, "Art and I will come back if you need us." And she will say, "That's good to know."

And then we'll drive across the dirt and gravel grounds as children stand gleefully in our path or reach their hands through the car window. We'll wave at the half dozen men standing at the gate, only this time we won't say, "See you tomorrow."

Because it's goodbye again.
Posted by Linda Myers at 7:48 AM 11 comments: