Busy days in the Iowa countryside 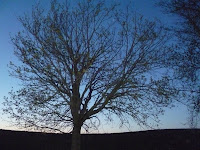 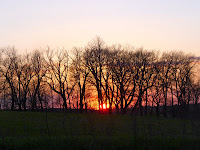 We've been staying in a farmhouse B&B four miles north of Montezuma, Iowa. I spent yesterday morning in Toledo, about 30 miles north of here, doing research in the genealogy library. It's a labor of love for the the dedicated volunteers. One of them, Carline, opened up the library especially for us. I had my iPad with all the information I have on my great grandparents, Samuel Wallace and Mary Catherine Moore, who married in 1867 and lived in the area until 1886. I wasn't able to find anything new on them except to learn that numerous Moore families had settled in the area. So I suspect the names I got from the court records - James Moore, Ezra Moore, J.S. Moore and others - may yield Mary Catherine as a relative when I look for them them on Ancestry.com. We're leaving for western Nebraska tomorrow, to explore the town Samuel and Marty Catherine lived in from 1885 until her death in1894 and his death in 1921. They're both buried in Gordon, Nebraska, so I'm hopeful I'll find an obituary that will help me track down Mary Catherine's family. As with other thing in life, though, I believe making the effort is as important as actually succeeding; "Life is a journey, not a destination." 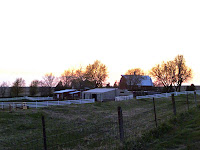 We're having a fabulous experience at the English Valley B&B - www.englishvalleybnb.com - for the last two days. We're staying in the Heritage Room. In the yard outside were 15 cats, two
miniature horses, three horses, a couple of bottle-fed calves and a friendly chocolate lab named Cocoa. Another guest arrived with her schnauzer, Dandy Girl, who delightedly chased all the cats. We all laughed watching the streaking cats, who leaped atop farm machinery wheels and fenceposts and then hissed at the dog from their safe perches. 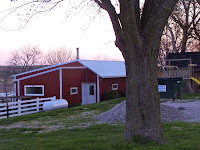 Doug and Stacy farm close to 5,000 acres on several farms in the area. Both of them were math teachers but decided to farm; they're third-generation farmers so they know what they're doing. Stacy says a successful farmer has a sense for business and marketing. He has to be personable, she says, so he can acquire land and also develop relationships with people and companies to buy his products - soybeans and corn. At dinnertime we all got in Stacy's Suburban and took hamburgers out to the men working in the fields. We drove right over the plowed field and then ate our dinner out of the back of the Suburban while Art got in the enormous planter Stacy's husband Doug and made a round. The planter is GPS equipped and can drive itself. 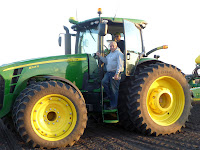 Back at the farm, we walked to the pond and Art did a little fishing, but all he caught was moss. Stacy built the first campfire of the season. 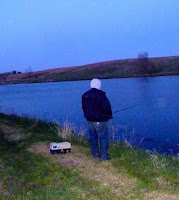 We'll be staying one more day here before we head to western Nebraska to look for Samuel and Mary Catherine.

Wow you found some really beautiful times while in Iowa. You saw an inner beauty most of us take for granted.Those minature horses are just like a big dog sometimes.

Lovely B&B you're staying at. Hope you find what you're looking for. Sounds like a fun adventure.

Love your animal sanctuary hotel! Sounds like a really good trip. Using my iPad to write comments. Haven't figured out how to correct mistakes yet, though. :-)

I would love that B&B with all the animals. I'll keep it in mind if I ever head that way.
Keep enjoying your search.

What an amazing experience you are having at the farm B&B! And best of all is how much you appreciate that way of life.

I'm jealous of your trip.

What a wonderful experience -- staying at a farm B&B. Reminds me of summers at my grandparents' farm in Kansas in my youth. I love your pictures!!

Glad your trip is going so well. It must have been incredible to be at the BH meeting listening to Buffet.

The scenery is beautiful and your BnB owners sound really wonderful! I wish you lots of luck in finding all kinds of useful information, and having fun getting there!, in Nebraska. Tell Art that catching fish is overrated anyway ;-)

What a great trip. You have inspired me to re-ignite the genealogy quest I started years ago, but abandoned when life got in the way.

What a lovely place to stay. It sounds like this trip is all you've hoped for it and more. So glad for you both.