We left home a week ago today for a short visit with old friends and a few days at a rural timeshare. It's been a good time away.
We spent three days in Lethbridge, Alberta with two college roommates of mine and their spouses. We visited Waterton National Park (Glacier National Park on the US side). My friend Sharon took this picture of the six of us. 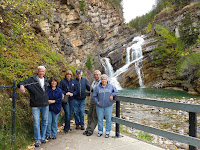 I used to tell her she could only take five pictures of us per visit. We've been meeting up from time to time for over 20 years. She has become a better photographer, and I have finally found my "pose smile".
Sharon and Ann and I were roommates our senior year at UC Santa Barbara. We found each other through the want ads but we got along pretty well. We all married shortly after graduation, and we knew each other's husbands. Eventually we all got divorced. The three men in this picture are our second spouses. We think we all made pretty good choices the second time around. Sharon and Bob live in Massachusetts, Ann and Larry live in Toronto, and we live in Seattle. We've met up in half a dozen places over the years. We eat, watch TV, read, and go on outings. These days, we also talk a bit about our grandchildren.
Our timeshare for the second half of our trip is in Blanchard, Idaho. Art and I are having a quiet time here. We'd planned on putting the finishing touches on my soon-to-be-published book, and we have spent a few hours each day at the dining table with the computer. We've also gone mushroom hunting at Priest Lake (about 80 miles north of here) and, today, attended the Apple Festival at Green Bluff, Washington (about 40 miles southwest of here). The weather was in the 50s and cloudy both days, which is fine with us.
At the mushroom hunt we found four mushrooms which we left behind for another hunter. At the Apple Festival we bought two bottles of flavored balsamic vinegar from the woman who made it, an acorn squash and an apple for 66 cents from the farmer who grew them, two bunches of yellow beets for a dollar a bunch, a wood and metal bird feeder from the man who made it, two pulled pork sandwiches with potato salad, and a medium-sized bag of kettle corn which will probably be gone by bedtime. Art says he doesn't want any so I get a small bowl for myself, and then he assists in eating it.
We forgot to bring a road map of rural Washington and rural Idaho. We have a GPS in our Prius, and I have an iPad, but some of the roads were quite remote and the iPad frequently had no signal. So we ended up on some very rural back roads, and going the wrong direction. It was all fine, though. We knew we'd eventually come to the Canadian border or I-90, and we knew our way home from either place.
Tomorrow we'll be visiting one of Art's sisters and her husband who live down the road half an hour or so. And Tuesday we head home.
I've had thinking time on the long drives and in the quiet condo. From time to time I need to reevaluate what I'm doing. I clarified my priorities this week in the light dreams that happen just before final waking in the morning: spirituality, community, curiosity, purpose, and exercise. I get off track sometimes. When I got up, I deleted a game I'd been playing on the computer; it was stressful and serving no purpose other than wasting time. I felt better already.
I love traveling with Art. He can be quiet for long periods of time. He can pick up a book or two in a "take one, leave one" library and be content. But he's always up for a walk or an outing. And so am I. When we're home we're busier and more distracted.
Tonight we're having a simple meal: broccoli and cheese soup, baked acorn squash and a simple salad with beets on top. That sounds really good to me.
Posted by Linda Myers at 4:25 PM

You sound very content. A good place to be.

It sounds like your time for renewal has worked. These is such a peaceful tone to your post.

Thanks for following my blog and for commenting. Following you back. I'm interested in reading about your retired life since I retired a few months ago. So far I'm much busier than I expected! I look forward to reading more of your blog.

Your life -- from traveling companion to destinations to tonight's dinner -- sounds wonderful!

A good traveling companion makes all the difference. ;) Sounds like a great trip that was a time for fun and renewal. Wow! But I bet you'll be glad to be home, too. :)

Such a comfort a great traveling companion is.
If you were in that picture, I sure couldn't see and it wouldn't enlarge. I will take your word that you have perfected your pose smile.

It's great that you can travel and meet up with friends of long standing along the way.

What an enjoyable time. I never kept track of many college pals, they faded away through the years.

I am not surprised to find you get overextended quickly, because of your curiosity and dynamic personality. Glad to hear you got that renewal space you wanted. I didn't read in your list where the new career fits in... or is it all in there between the lines? (Being a mediator, I mean.)

I wonder what kind of book you're publishing??

Oh that yummy fall food! There's nothing like old, dear friends. Good for you for setting up time together.

As I read, I felt such a sense of peace and contentment in your words. Spending time with old friends, driving roads to possibly nowhere, and a good, steady companion . . . it all sounds perfectly wonderful to me.

This sounds like a really special time, with an excellent outcome. It's great to have a truly compatible traveling companion.

Like DJan, I wondered where your new passion--being a mediator--will fit into your list of priorities: "spirituality, community, curiosity, purpose, and exercise."

You mentioned that you deleted a computer game. Recently I bought my first one and then returned it unopened. With so many books to read--novels and historical nonfiction--I just don't want to begin spending more time at the computer!

Your trip and your traveling companion sound so restful and fulfilling.

I'm completely tripping out, Matt & my best friends are Sharon & Bob and they too live in Massachusetts :-) What ar the odds!

Sorry its been so long since I've had a chance to stop by but it looks & sounds like you're enjoying your traveling and time away from all of life's many distractions as well! We all have so much to do I'm just happy to have a chance to catch back up again & see how you've been! And I totally owe you an email about Sedona, I didn't forget :-)

I love the friendship that you all share. Sounds like you're finally enjoying what this path you're taking is all about.