We have had sunny weather for a week now, and I am nowhere near bored with it. The opportunity to go outside and squint into sunshine, or put on hiking boots and go for a walk among Sedona's red rocks, or to watch a sunset (I am never up early enough to watch a sunrise, though I hear they are beautiful too) - is such a treat for this Pacific Northwesterner.
I'd avoided putting on my hiking boots since I hurt my back last May. But the doc I saw most recently said, "You had an injury. You're recuperating from the injury. Nerves take a long time to heal." Then he said the magic words. "Don't be afraid of your symptoms." He told me to do whatever I want. Even if the symptoms temporarily worsen, they'll go back to their baseline within hours, which is slow recovery.
So I put on my hiking boots for an introductory hike on Tuesday. We chose an easy trail - just 2.5 miles round trip, with an elevation gain of 400 feet. I stocked my daypack with water and trail mix and sunscreen. I collected my hat, a zip vest and a midweight hoodie. We found the parking area and set out.
At 4500 feet, I was breathing a little harder than usual for the first half mile or so, but then my body remembered how to work exercising at this altitude. We walked to the Coffeepot Rock formation, had a snack, and came back down. It was wonderful! Thanks to the doctor's words, I was encouraged to take that hike with no consequences. 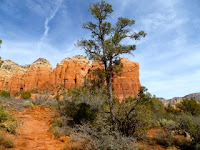 We took another hike today, in a different area of Sedona. We were looking for the Llama Trail, one of many between Sedona and the Village of Oak Creek. Somehow we missed a trail marker and ended up on the Trail With No Name, where we wandered for a mile or so before coming upon a main trail again. Tomorrow we're going to make attempt number two to find the Llama Trail. 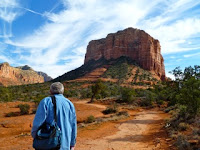 We're planning a hike every day for the next week. None of them have to be long. Our favorite is the 4.5-mile one around Courthouse Butte and Bell Rock. We've done it on two previous visits. These early ones are warmups. After all, I haven't been hiking recently, and I've got to get back in the groove.
I decided to resubmit my book manuscript to correct some typos I found after it was published. It costs more when you don't catch them before sending the manuscript in for the first time! I kick myself as I work my way through the book and find discrepancies (like "US" five times and "U.S." seventeen times, or like "Viet Nam" 50 times and "Vietnam" 9 times). I want this work to be the best it can be before I start sending it out to places that serve vets. As a friend pointed out, I want people to read about the vet's story, but the writer has to be credible. And with typos or inconsistencies that credibility is compromised. Arizona evenings are a good time to fix those things.
I looked up cost of living comparisons between Brier, Washington, which is where I live, and three Arizona cities: Tucson, Prescott, and Sedona. Not that we're thinking about moving; a winter destination is a more likely outcome once we've checked out all the places that look interesting and have sunshine in the winter. It turns out that Tucson is 31% cheaper than Brier, Prescott is 18% cheaper, and Sedona is about the same. That's surprising! I should probably check out Ecuador, too, since we'll be there next month for three weeks.
This bird was standing on its rock in front of our condo for half an hour this morning! 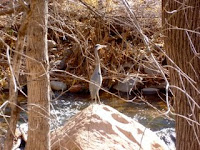 I have been following your hiking adventures on Facebook with some envy, I must confess. The blue sky and red rocks are glorious.

That just looks like a glorious place to hike! Love the heron checking you out. :)
Glad the hiking has been going well for you, too.

I'm envious. I'd like to be out in the sun hiking. I think your doctor's advice was really good. I like that, "Don't be afraid of your symptoms."

It is really beautiful down there this time of year, I am sure. Enjoy.

I'm glad our weather has cooperated for you, Linda. We can have a few days of dreary skies and rain this time of year, but it is more likely in February or March. Since it never lasts for more than 2-3 days, us sun-lovers don't get too stir crazy.

Hiking in Sedona is a real treat. Your pictures make me want to drive up soon. We may go to Prescott next weekend. The interesting "Cowboy Poetry" festival is taking place.

We have been having wonderful weather, which is due to disappear this weekend. Our hike today was in sunshine, mostly, with a few clouds, perfectly normal for here. I am loving reading about your adventures and so glad to hear you are hiking again! :-)

Sunblock sounds real bad. It was 9 degrees when I got up.I would love to see some pics.

I envy you the warm sun. We've had sun this week, but it's so cold i spend my time huddled under a blanket even though the heat is set at 70.
I'm so glad you are able to hike with no consequences. The body's ability to heal is a blessing.

Super photos and the scenery looks so exotic to these English eyes. Glad your back is allowing you to hike now, Linda.

Is that bird a roadrunner? When I vacationed in Arizona many years ago, I was told they're rarely seen.

Good for you having the wisdom to stretch your muscles and stamina on your explorations! It's easy to become timid after an injury.

Linda, I'm so happy you're hiking again. Easy does it, but I think you've healed.Sounds like the weather has been perfect, too. Soak up some of those spiritual vibes I hear they have there!

I hear you about the proofreading! I just caught a typo in a story being published in a Chicken Soup book. I emailed right away but they had already sent it to the printer. Luckily, they caught the typo before it was sent. Whew! How many times did I proofread that?! I'm telling you, it takes a village to proofread. Great hiking stories!

You've been busy doing the most marvelous things! Sedona is lovely and hiking...well, in my dreams I'll do it again someday. I'm fascinated by that doctor telling you not to be afraid of your symptoms. If I may ask, what symptoms does he mean? Some symptoms can't be ignored...by me...so I imagine.

Hiking in Arizona and a book. Wish I were there!

Good for you, getting out and hiking. And the scenery is gorgeous! Photos of sunshine and warm places will be very welcome for the next few months, now that winter has really arrived in Minnesota.

Congrats for getting back into the hiking. It can only strengthen your back.
To have a winter place there would afford you the best of both worlds. Hope you find what you want.

Ms. Sparrow - I think the bird is a great blue heron. Those guys are so beautiful I think they ought to be rare, but I've seen them all over the country.

Nance - when I hurt my back (sat down in a chair an inch and a half lower than I expected) I compressed nerves in the lumbar area. The only symptom I have is tingling in my feet. The doc says that will diminish over time. It already has, after 8 months, but it may take a couple of years.

It's such a beautiful area. It sounds wonderful, Linda. I miss hiking among the red rocks and blue sky.

Glad you're getting the most out of beautiful Sedona, this is the time of the year to visit, gridlock is terrible on the two main streets in summer. We too are from the Pacific N.W. (Birch Bay) and love our retirement days here having lived in Santa Fe, NM for over 20 years.

The Tucson area has a smaller city feel for a second home, so much to do and see without that big city hustle, might be a perfect place for those chilly WA winters.

Greetings, from Nancy at the Boat House

You've seen more scenery in my state than I have haha! Glad you're both having so much fun among the red rocks, Sedona is truly breathtaking.

Tucson is wonderful, my sister lives down there. North side of town is the best, quiet and comfortable nestled in the foothills. Ah relaxation!

First time ever that Arizona has looked good to me. I wonder if it has to do with a week of sub zero temps where I live? GLAD you listened to the doc and are hiking again.

You a great writer. I hope your book does well.

Enjoy the hiking and warm weather.