As far as I know, I'm the only person in my family, on either side, who's interested in graveyards. I had a special time with those entities on our road trip to Tennessee and Kentucky.

In western Tennessee, I met up with my father's father's people in their graves. Mt. Olive Cemetery, in Dyer, is a beautiful place, full of Horner and Flowers people - my great grandparents, great greats, and so on. Though a tornado destroyed the church several years ago, and had its way with some of the tombstones, I found my people. 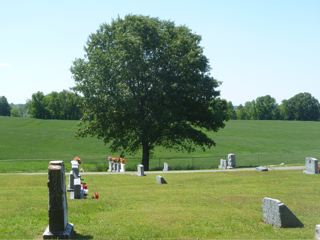 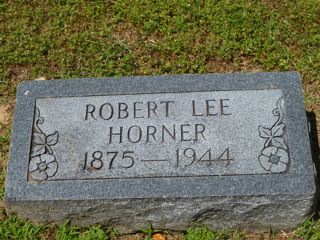 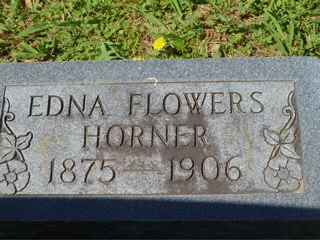 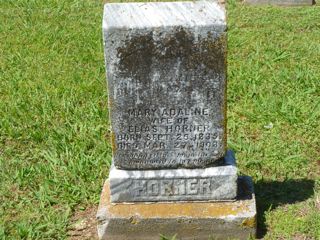 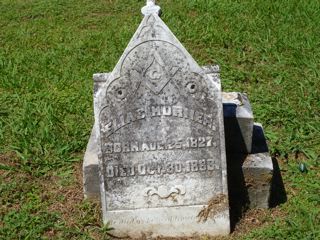 In my genealogy research, the Horner and Flowers families have been extensively documented by other people, so I've known about these folks for a while. Still, it was nice to see them resting there. My grandfather lived in Dyer until he enlisted in the Army in World War I. After that he went to work for the railroad.  He retired to California and is buried at the veterans cemetery in San Diego.  I don't have a photo of that tombstone yet.

Dyer is a quiet town today. I wonder what Grandpa's life would have been like if he'd come home when the war ended.


In Wallins Creek, in Harlan County in eastern Kentucky, I found a very old grave belonging to a predecessor of my father's mother. Though it's been several generations since my direct ancestors lived there, I'm probably related to half the people in Harlan. 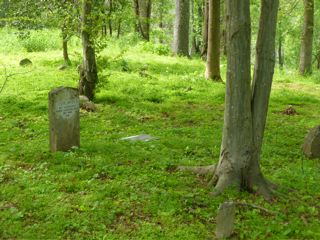 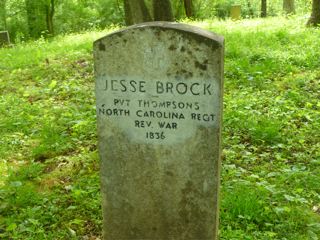 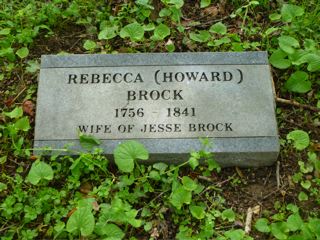 I knew about these gravestones, too, though they're not in a churchyard cemetery. I followed the directions provided to me and found them.

Jesse Brock's son George was my gggg grandfather; he emigrated to Ohio as a young man. I'll need to go to Scioto County in that state one of these trips to find where he's buried. I suspect life in eastern Kentucky was rough; maybe there was more possibility in Ohio - even though George went north rather than west to find a place for himself.


In Bowling Green, Kentucky, I had a graveyard adventure. That's where I found some of my mother's father's people. My ggg grandmother, Catherine Reddick McNeal, is buried in Pioneer cemetery with two of her children. I knew that from my online research. When we arrived in Bowling Green in mid-afternoon it was 85 degrees and humid.  We got directions from the desk clerk at the Fairfield Suites, where we were staying for the night. Once in the general area of the cemetery, I was at a loss. Finally stopped at a minimarket near our supposed destination. Went in. Asked the clerk where the "real old cemetery" was. She had no idea. Asked several people in line with their beer and ice if they knew. Everyone shrugged. Then one smiling man, wearing a "wife beater" t-shirt and missing half his teeth, said, "It's down four blocks, with a black fence." I thanked him.

Pioneer Cemetery's gates were locked. It's owned by the city, and some problems with vandalism resulted in a fence being put up. Across the street, in a former auto repair shop, I found a CrossFit gym, with two women working out. I explained my dilemma. One of the women, Julie, walked across the street with me. Lean and trim, she slid under a space beneath the fence and walked the cemetery looking for Catherine! After a few minutes I found a wider opening and wiggled beneath the fence as Julie took my picture. I got grass stains on my shirt - for the first time in over 50 years. 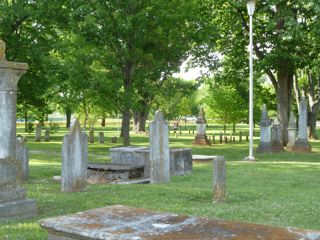 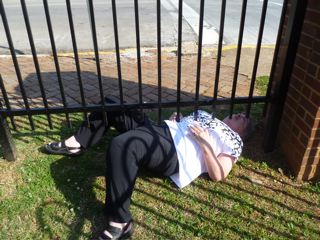 The cemetery was full by 1861, and all the old gravestones were moss covered. I wasn't able to find Catherine and her children Elizabeth and Pendleton in there, but I know that's their resting place. I wondered if a map of the cemetery existed showing who was buried where.

As we drove off, Art noticed a funeral home. I pulled in. It was closed, but there was a phone number on the door. I called it. Within minutes a funeral director called me back. I explained my dilemma. He told me I should call the City of Bowling Green. I did that. The lady there told me to call the library at Western Kentucky State, which is in Bowling Green. I did. Apparently there's no map, but they do have access to a list of cemetery residents. I had that myself, so I think I'm at the end of the line. Unless on some moonless light I take a pressure washer into the cemetery and clean up all the tombstones. I did that last year in Nebraska with my mother's mother's people, but I knew which tombstones were theirs. Maybe I'll just have to lay this issue to rest!

Not far away, Fairview Cemetery houses a number of Catherine's children, in-laws, and grandchildren. The land for the cemetery was purchased in 1861 from William McNeal, one of Catherine's children. He is buried there. I didn't realize until recently that all these people were related to my gg grandfather Robert Theophilus McNeal (he's buried in Denver). I only knew that when I found the last of Catherine's children, Drucilla, and found on her death certificate that she had the same parents as my Robert. As a genealogist, it's exciting to find a link that's been missing. 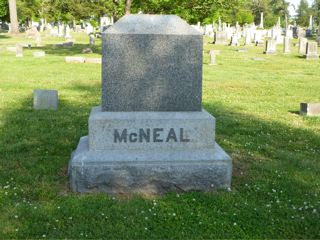 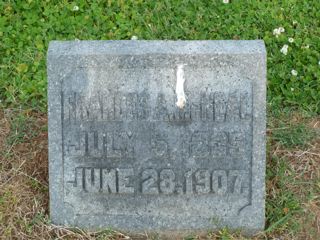 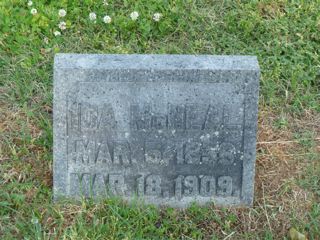 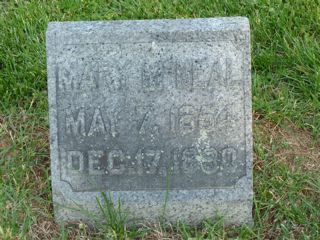 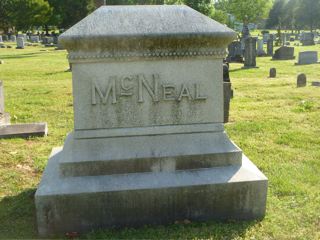 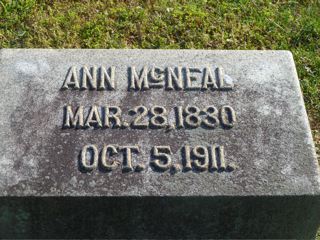 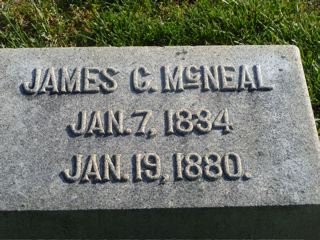 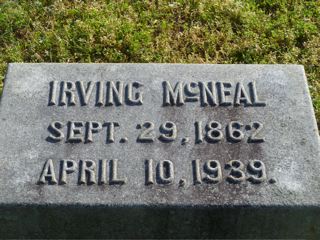 So, back home again, I'm feeling part of a large family. Even if most of them are very, very quiet.

Such an interesting post, Linda, and I loved the pictures of old gravestones in quiet tree-filled cemeteries. My mother-in-law and one of my sisters are both very interested in family history and enjoy this kind of fact-finding and reconnecting trip.

Memorial Day. My family spent every one visiting the rounds of cemetaries.
Love the breaking in shot!

That next-to-last one looks like he was only four, or minus four. Was that a mistake? Very interesting post, Linda. I am also intrigued by graveyards.

We also love old cemeteries, and looking up ancestors.

I was impressed by the good condition of some of the headstones from the 1800's. Your quest was quite an undertaking (no pun intended). With the number of us who are opting for cremation, cemeteries will decline as a resource for those looking for ancestors in the future. It's a good thing that record-keeping has improved so much.

Love your crawling under the fence shot.I spent Thursday at my 2 familiy cemeteries starting to decorate.

Wow, I can see that geneological research is not for the timid! Keep up the good work!

I'm so happy you found these stone and were so diligent in your search. It mostly paid off. I loved the photo of one determined woman - you - going under the fence to see the family graves.

I've spent many happy times with my father and mother searching out old family graves. Daddy did a lot of genealogy. I thought I would as I got older, but so far I haven't gotten into it much. Time will tell.

I like cemeteries, too. When I lived in Paris, there was a lovely one down the street in a walled garden. I used to go sit there, shielded from the crowds and the traffic noise, and read.

My favorite cemetery, though, was a pet graveyard in Memphis. Nestled under pine trees overlooking pastures with horses and cows, it was so quiet. I loved what people wrote on the headstones, effusively and unabashedly expressing grief and love in ways they never would on a human's more dignified monument. It was so completely charming.

You really found a lot of long gone family members. Ms Sparrow brought up a good point. These trails will end for future generations with the booming practice of cremation. Such a sad thought.
Totally cracked up at your sneaking under the fence. That is determination.

It fascinates me to read how many of your ancestors you've been able to locate, the dedication to tracing your roots is astounding. You could write another memoir on this journey and the stories of your relatives who've passed!

Did you have any family in Boston? My last landlord before we moved to AZ was a Flowers. Not a very common name up there, in fact the only ones I'd ever met. Wouldn't that be a trip if we had a 6 degrees of separation moment after being bloggy friends for so long! :-)

Gosh, Linda, you are so tenacious! I love old cemeteries, especially when there are ancestors buried there. But I love to wander and read the stones, even if I don't know anyone! Old stones are so very interesting, and there is a lot of information to be had. You got some fine photos, but I also love the one of your scooting under the fence! That's priceless!

Yessss! This post has the photo I have been waiting for! Love it and love our chats about our families. You're the best. =)

Hi Cousin! I too am a descendant of Jessee and Rebecca Brock. We visited the cemetery a few years ago. We stopped at the post office to ask where it was. I mean the post office knows where everyone lives right? The man told me to look out the window. I did. He asked if I saw the hill? Yes. It's at the top of that hill on the right. Oh. I asked him if he thought we could make it up there in our old 30' Winnebago? Sure, he said no problem! If you meet someone just stop, they'll pull into a driveway and let you pass. So up the hill we went, easy! We wandered around in the thriving poison ivy and finally found them. I stood there and cried and cried. That make hubby very uncomfortable. He kept asking me, why are you crying? They've been dead for a long, long time. You don't even KNOW them! Yes, I do know them. I know their parents, siblings, children and grand children for many generations. I know where they lived. I know about their taxes, wills, if they were sued. I know about Jessee's service to our country. I know I lot about them! And I cried some more. I was so honored to be there in their presence. From there we went to PA and stopped at a couple other cemeteries to visit GGGGGGG grandparents. I cried there too. Hubby still didn't understand. It's ok. I think it takes a genealogist to understand. I left dozens of Kansas Sunflowers on the graves of my ancestors. I'm here because of them. I remember.