We spent our last three days in Iowa as the guests of Stacey and Bill Hurlin, in the Abundance Ecovillage near Fairfield. The houses in the sustainable community are off the grid, providing their own wind and solar energy and composting.

I was especially interested in how air is circulated in the houses. Each dwelling has tubes buried eight to ten feet in the earth, where the temperature is about 56 degrees year round. A small fan draws air from outside into the tubes and then into the house, where the temperature is modified by a furnace or an air conditioner as needed. The air is completely replaced several times a day inside the house, so there are no stuffy rooms or stale air.

I hope you'll want to learn more about the ecovillage here.

Here's the kitchen of the Sweetwater Bunkhouse, Stacey and Bill's rental. We shared the space with Jim, who lives in Chicago but commutes to Fairfield for three days each week. Interesting conversations! 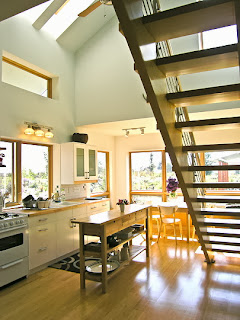 Fairfield is a town of about 10,000 in southeast Iowa. A major presence in the town is the Maharishi University of Management, formerly known as Maharishi International University. Transcendental meditation is an important part, and many residents of Fairfield practice it daily. Two domes on the campus were built specifically for group meditation.

Additionally, artists have come from around the world to live in Fairfield. Stacey estimated that 3,000 of the town's population have moved there from somewhere else.

Our conversations about GMO continued in Fairfield, where the people I spoke to were opposed to it. While there we went to see the current movie "GMO OMG". By the time we left town I felt more informed on both sides of the controversy.

Next week Washington residents will be voting on Initiative 522 which would require labeling of GMO foods. Lots of money has been spent by out-of-state companies to defeat the measure. I'm not a TV watcher so I have seen very few of the media ads. I know how I'll vote.  I got educated in Iowa!
Posted by Linda Myers at 8:14 PM

We've discussed GMOs a bit on Facebook, so I know where you stand after having heard from both sides. I was impressed by the professor of agricultural science from WSU who I saw on the local news. My vote is in the mail.
I really admire your travels to learn lessons. You are quite amazing.

You really did get both sides of the GMO conversation. I love the idea of the tubes in the ground for temperature control. I have been working on my storm shelter and love how the temp there is always 60 degrees, regardless of outside temp. I will check your link. Thanks.

I'm very intrigues by this ... a visit in the spring might be in order ...

This is very interesting indeed. I haven't filled out my ballot yet, but it will definitely be in the ballot box this weekend! Important issues to deal with. I enjoyed hearing about this unique way of heating and cooling a home. :-)

Interesting post. Good for you for getting informed. GMO-OMG!

I guess it stands to reason that even progressive farm-belt states will not be voting on GMOs any time soon! Sigh. I didn't know about Fairfield, but my hubby will love reading this; he is always saying each village or neighborhood should provide its own power in this way. Thanks for posting this!

What a cool idea (pun intended). I remember looking into geothermal heating and cooling for our house in NY, but quickly abandoned the idea when I found out the installation cost was going to be in the neighborhood of $50K.

Dear Linda, thanks for educating me about GMO in this series of blogs about Iowa. And the ecovillage seems to be a goal for the conservation of our planet. Peace.

I like the ecovillage very much and admire that they are off the grid. I think it is very reasonable to require labeling of all GMO foods, that way consumers can choose. Of course should GMOs even be allowed, that is another question for another day.

Mango Coffee and Me said...

Very interesting information in these last two blogs. Feeding the world is a challenge. So is irrigation; seed stock; herbicides and pesticides vs integrated pest management and who knows what else. One thing for sure...we need more farmers and more knowledge about how to sustainably grow enough food for all of us. Good job Linda.

You are a lifelong learner for sure!

Super intriguing concept! How cool to visit and learn more about such an environment! It would be very interesting to visit sometime, perhaps if/when I retire!