Excerpt from our 2003 sail on the schooner Heritage out of Rockland, Maine. We spent last week on our sixth trip on the Heritage.

This morning’s breakfast was French toast and bacon. There were no prunes. Fortunately, I no longer needed them.

Our morning shore trip was to the town of Stonington, on the southern coast of Deer Isle, but we had anchored in a different location, so the yawl boat was used to push the schooner. A little larger than the hamlets of the previous days, this community had a number of shops, including a few selling antiques. We had an hour and a half this time, so Art and I took a three-mile walk in the country and allowed ourselves some time to browse in the shops.

I found a store selling espresso and eagerly bought my usual double tall mocha. It had been nearly two weeks since I’d had anything but regular coffee, and I looked forward to this treat. To my dismay, it was the worst mocha I’ve ever had – watery and weakly flavored – and, except for those I pick up in airports, the most expensive. I take good espresso for granted, since it’s so common in the Pacific Northwest. Foolish of me.

Art stepped into a little shop where he found a T-shirt that immediately appealed to him. He held it up delightedly. It was black, with a skull and crossbones over the words “The beatings will continue until morale improves.” Art complains a lot about his work, so I figured he was buying the T-shirt to proclaim his displeasure with the environment where he makes his living. In the same shop he found a 30-inch, wide-bladed plastic sword. I supposed that would be a gift for our grandson Kyle. I was surprised at his purchases, though. Art rarely buys souvenirs when we travel.

Our sail that day was under sunny, nearly cloudless skies. When I finished taking my shower and washing my hair, I found a comfortable spot on deck to finish up my novel. My lower lip was displaying early symptoms of a herpes outbreak, which happens to me frequently these days when I get too much sun. Imagine, too much sun in Maine! I had forgotten, all week, when I was putting sunscreen on my face and neck and arms and legs, to pay attention to my mouth. I knew that within a few days I would be quite uncomfortable, but it was too late to prevent, so I resigned myself to some discomfort in the coming few days.

I noticed Marjorie and Karen on the port side of the deck. Marjorie was pouring a bucket of water on Karen’s head. I put my book down and walked over to see what they were up to. Karen and her husband Ned had sailed previously with Doug and Linda, including on the Isaac Evans, their previous schooner, where there had not been a hot water shower available. Karen was showing Marjorie how passengers had washed their hair - by dipping a bucket into the water, getting their hair wet, shampooing with some sort of special soap, and rinsing with another bucket of water.

They both had wet hair and they were both giggling. Marjorie said, “Linda, want me to wash your hair?” I told her that I had just gotten out of the shower where I had washed it myself. Marjorie said, “Oh, well, you have to do it this way, too.”

I was reminded, for some reason, of the antics of high school girls. But I was game. It was a warm day, after all, and I’d spent enough time for now in the solitude of my book. So I said okay.

Marjorie told me to lean over the side of the schooner. I watched the bucket being lowered into the water on the end of a rope. When it arrived back at deck level, Marjorie poured the water on my head. That water was so cold I gasped. For some reason, I had forgotten that we were sailing on the edge of the Atlantic Ocean, that the water was cold, and that it was salty. Marjorie’s firm fingers massaged my frigid scalp as she worked in the shampoo. Then Karen dipped the bucket again. I shrieked as I saw it coming back up, full of water, and I realized that my head was already cold. I wondered if there would be brain damage done to me by lowering the temperature of my scalp even further. That second bucket of water was just this side of painful. 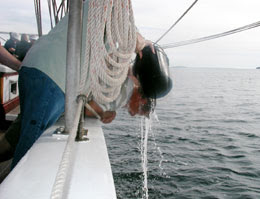 Karen handed me a towel and I dried my hair. Now that the shampooing was over, I felt exhilarated and clear headed, and proud of myself for stepping outside of my normally conservative habits.

Marjorie looked around. “Who’s next?” I knew with complete certainty that no one but Marjorie could persuade anyone else to go through this ordeal. Marjorie’s husband Bill had been watching, and he decided to give it a try. His bellow as the cold water was poured on his head drew the attention of other passengers. Once Bill’s hair was clean, he proclaimed that he was the owner of the shop and that Marjorie and Karen were the “girls” working for him. By this time, the captains and crew were keeping an eye on the small commotion on the port side.

I watched with astonishment as, one by one, the passengers and crew of the Heritage were exhorted, persuaded, teased, and otherwise induced to allow Marjorie and Karen to wash their hair with bucketfuls of seawater.


When I saw Linda getting her hair washed, I got the camera out and proceeded to take some pictures. I was nagged and cajoled by Marjorie and Karen, but I was interested in reading my book. I kept one eye out, though, watching the goings on. It was like a bunch of teenagers performing some juvenile stunt, like stuffing a telephone booth full of people. Finally, after everyone else had been talked into getting their hair washed, they all started in on me. So, rather than fight everyone, I gave in – an “in for a dime, in for a dollar” attitude. The first bucketful was quite invigorating, but the second one, which was larger in rinsing, kind of numbs the skull. But a good round of laughs was had by all.

In the end, of 29 passenger and crew, 23 participated – including both Captains Doug and Linda. It was one of those times when the spirit of spontaneity and fun prevailed over good sense.

When the beauty shop closed down for the day, we made ice cream on the deck. The ingredients for chocolate and vanilla ice cream were poured into metal canisters sitting in buckets of ice and salt. Sally and I sat side by side on the canisters while two of the men turned the cranks to cool the mix. Two others took our places. That was the only ice cream we had all week. It was worth the wait!

All week, we had been looking for ugly boats. Usually that meant “not schooners”. On this day we anchored across a cove from a black, steel, low-lying yacht. It reminded me of something out of a James Bond movie. We could see no signs of life on it. We dubbed it the “Big Ugly Boat.”

I’d had conversations, by this time of the week, with most of the other passengers. They were, for the most part, congenial and interesting, and they shared with Art and me an adventuresome spirit. After all, we’d all chosen to spend this week on a sailboat rather than on a cruise ship. Most of us had traveled other places. On this day, I learned more about a number of them. One woman had two artificial hips. One man had had multiple heart attacks. One had severe emphysema. One woman had lost a breast to cancer. I’d been aware all week, of course, of the botched surgery that had resulted in Charlotte’s need for a breathing tube.

I’ve been fortunate to have had good health most of my life. Now that I’m getting on in years – or at least into middle age – I’m conscious that every day is a gift. That I must take care of my body so that it will serve me as I move through life. I probably won’t be able bodied forever. Two years ago I went on my first rest-of-my-life medication to keep my blood pressure down. I had this idea that once my body started to decline, I would be done traveling and would need to stay home – or maybe wouldn’t want to be far from home. Yet, all of these Heritage passengers continue to move toward life and adventure, even as their bodies age and falter. It was a wonderful realization. There is plenty of life experience remaining. It’s all in the attitude.


Thursday, 22 miles. Sunny. Pushed to Stonington after breakfast for morning shore trips. Got underway just before lunch and sailed pout into the day to see seals and porpoises. Then sailed up the bay with a nice easterly wind. Cold salt-water hairwashing had by almost all. Ice cream in the afternoon. Anchored in Smith Cove near Castine. Saw the “BUB” boat of the week.

I thought we might be finished with traveling when I reached 70 and Tom 73 but we will be heading to Italy and the Med. Sea next month. Adventure still calls.

That shampoo story reminded me of our raft trip in the Grand Canyon. The women washed each other's hair in freezing cold water, but the air was so hot and dry that our hair was dry in no time.

It was the early precursor to the ice bucket challenge, it seems. Brrr! So glad I get to see you soon, Linda. I'm looking forward to finding out how the last year has treated all of us. You are still traveling and having adventures, more than a decade later. :-)

I kept thinking--salt water, won't that leave you sticky? I know bathing in it did. Got to admit you were all troupers.
Good to see that even those people on the trip with challenges, didn't let it stop them.