At the coast: storms, seabirds and a great lunch place!

We spent last week at Ocean Park, on Washington's Long Beach Peninsula. If you look on the very southwest tip of Washington, you'll see it. Formed over millions of years by silt from the Columbia River, the peninsula has 28 miles of continuous beach and has retained an old timey beach feel. It's a great place for storm watching and walking.

We spent five days at Ocean Park and it rained nearly every day from large storms that also hit the Seattle area over a hundred miles away. Once it hailed. The wind blew a lot. When the rain and wind stopped each day, we went for a walk. On two of the days we were the only people on the beach. Just us and the seabirds. 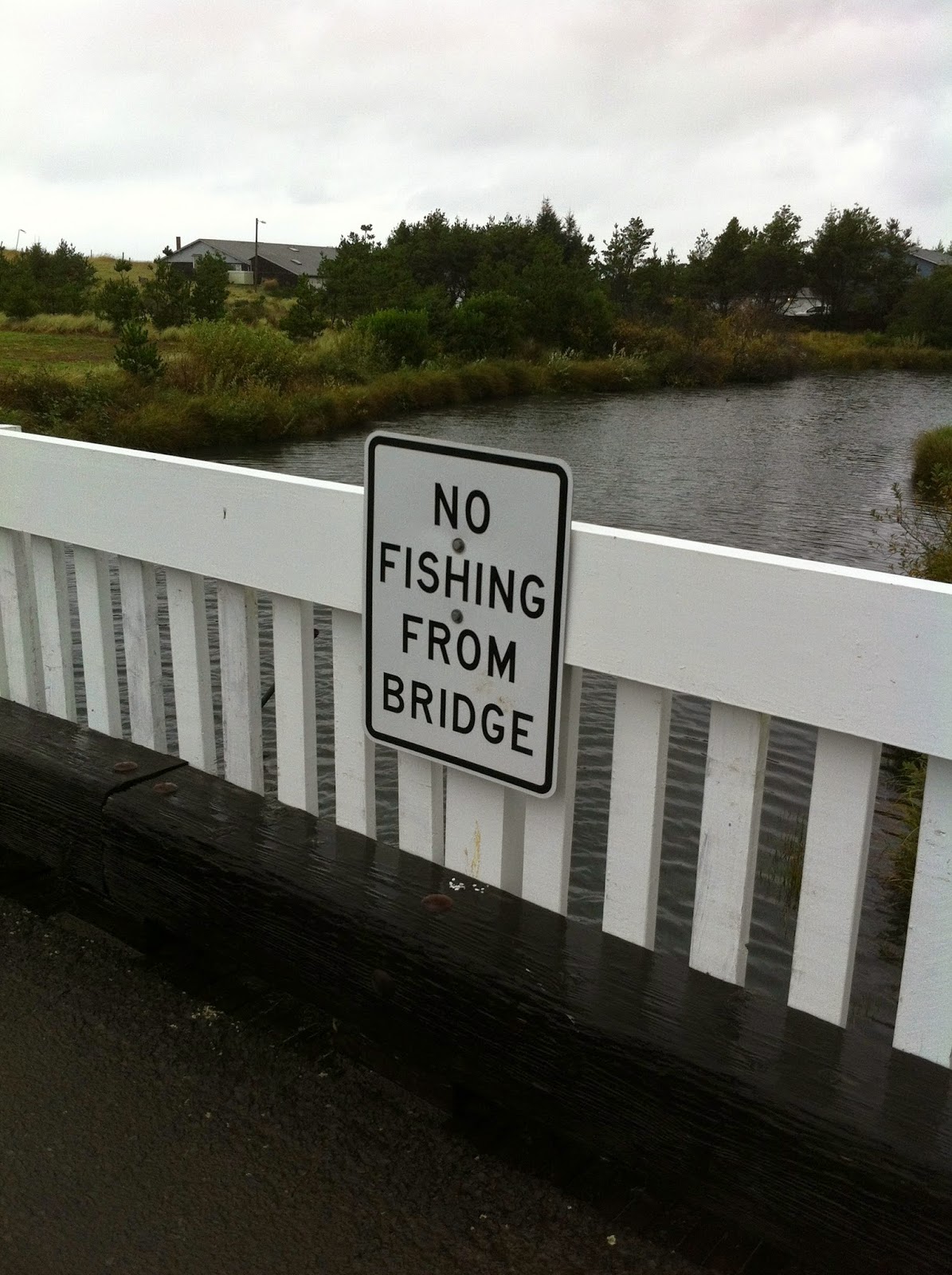 One-lane bridge on the walk to the beach 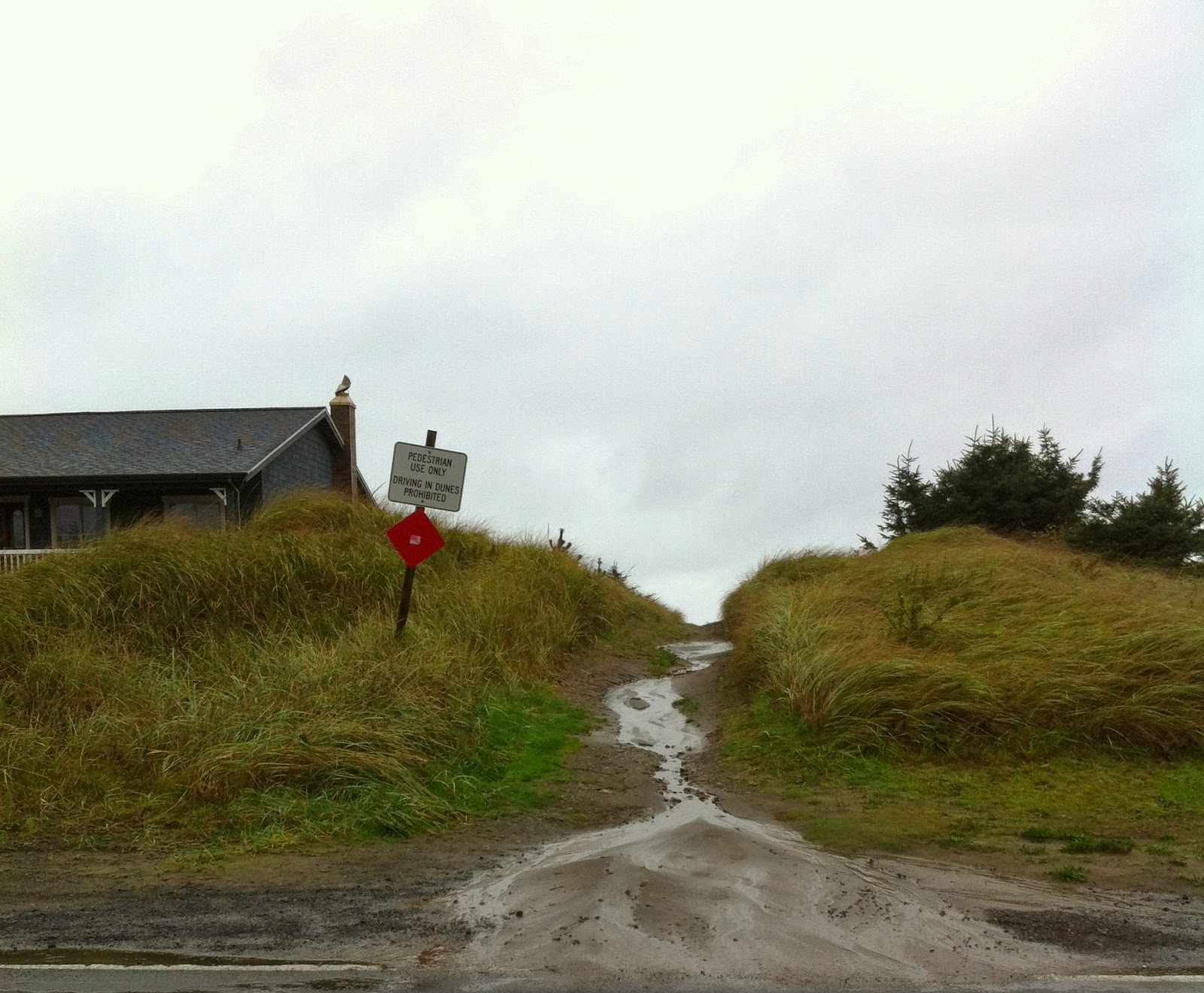 On the other side of the bridge. 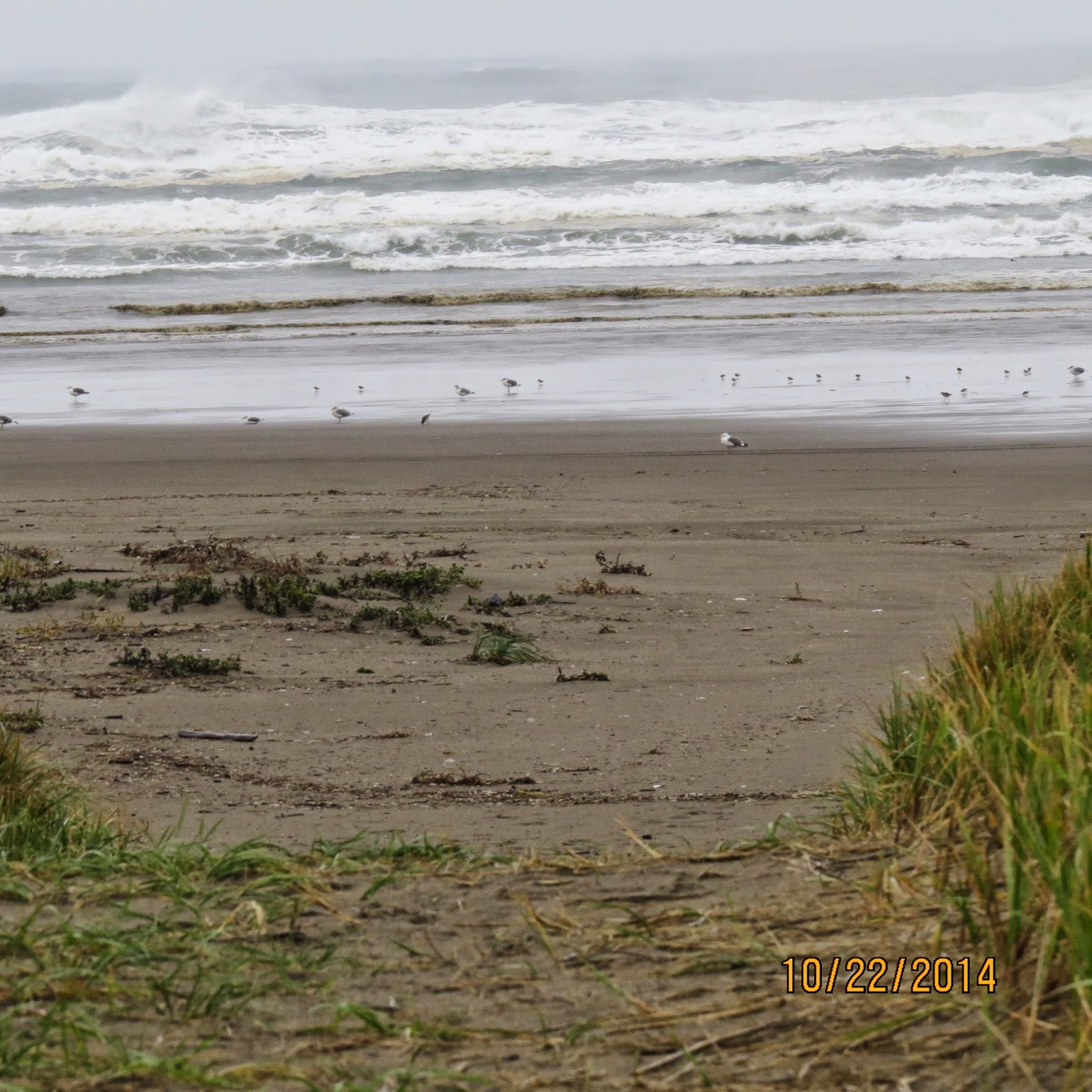 "I must go down to the sea again, to the lonely sea and the sky." 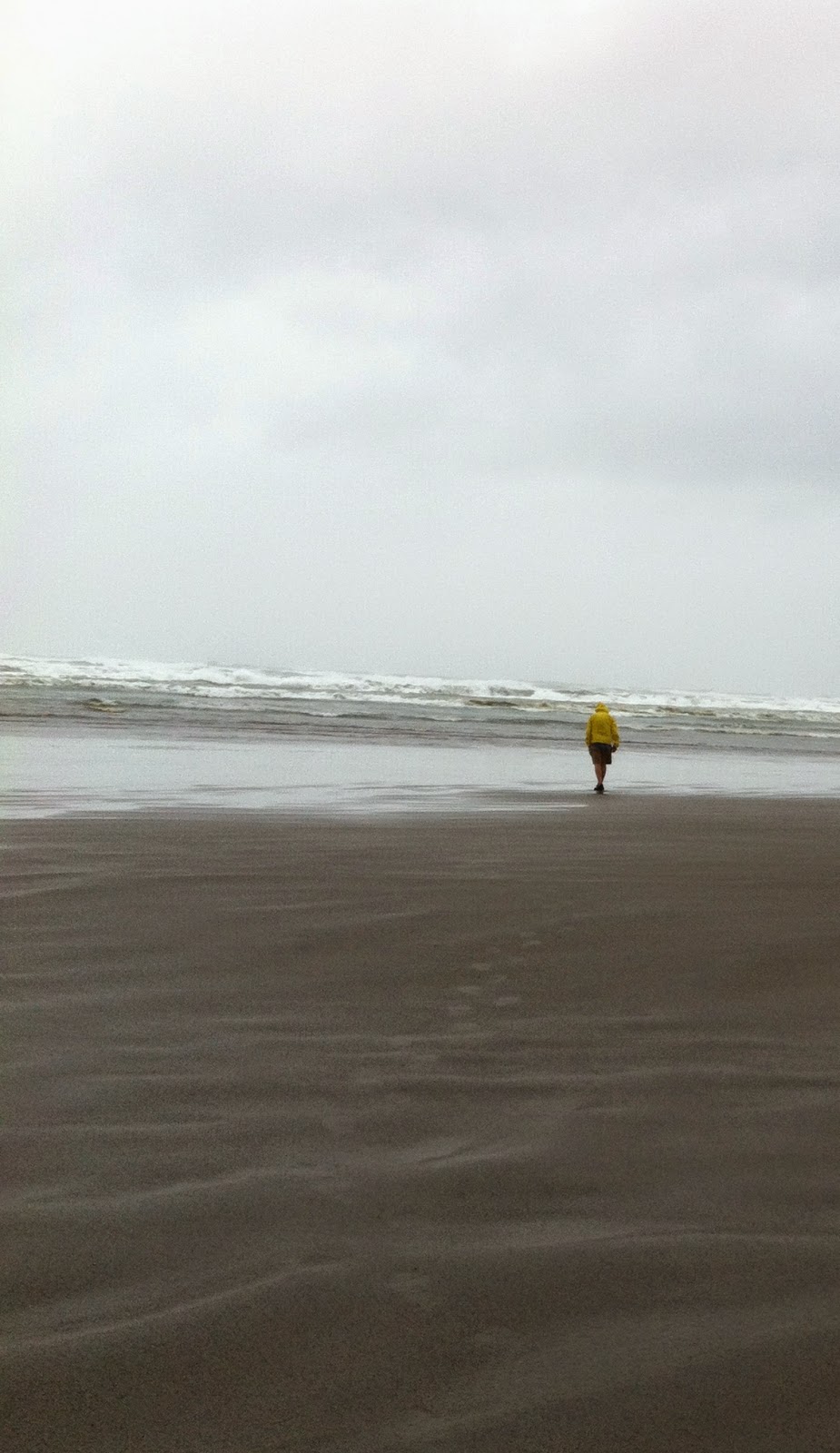 Art looking for clams. Otherwise known as "the old man and the sea". 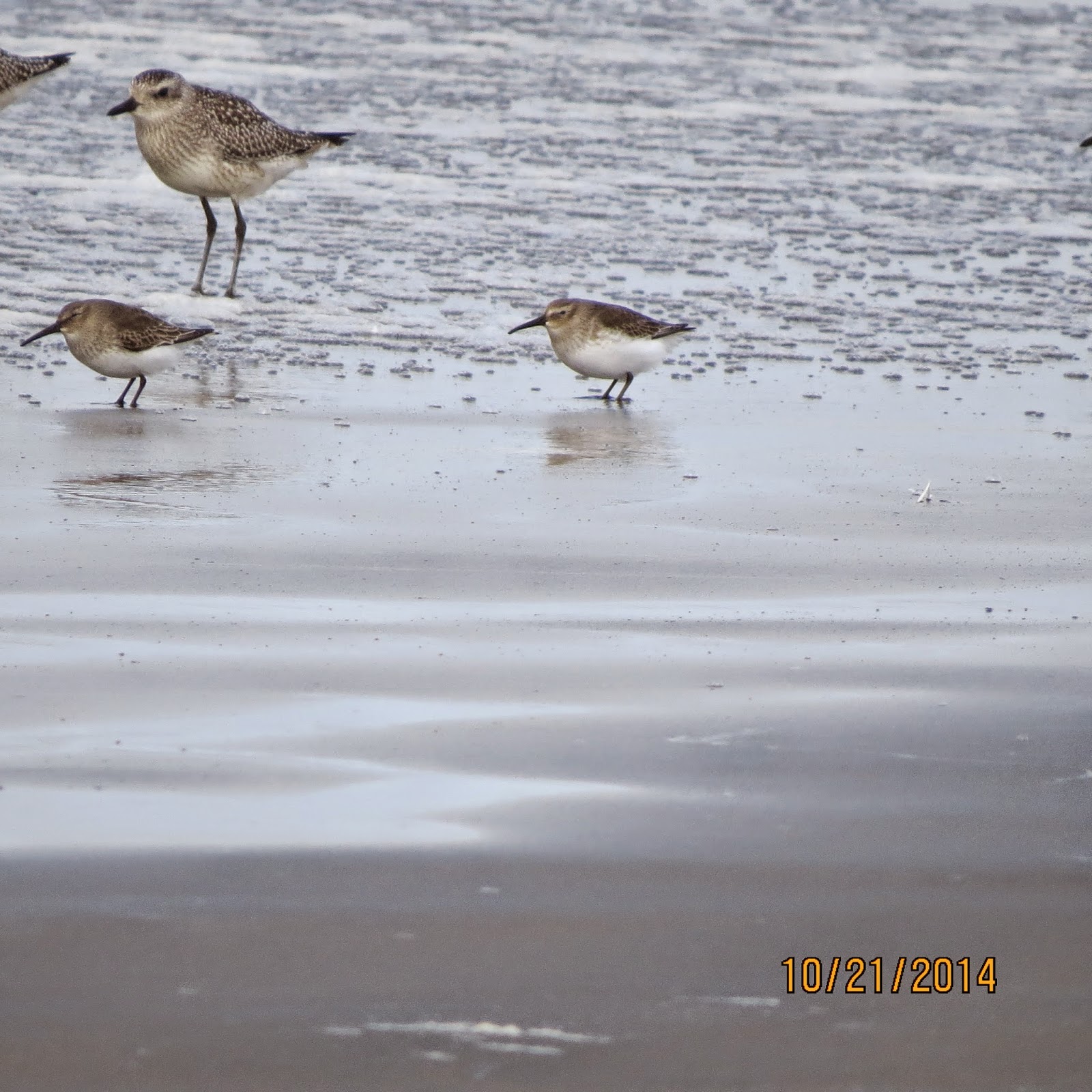 Seabirds like this fly in great flocks, patterned like an undulating wave in the sky. Once on the sand, they run to the edge of the tide, then run back. Art says they're looking for plankton. 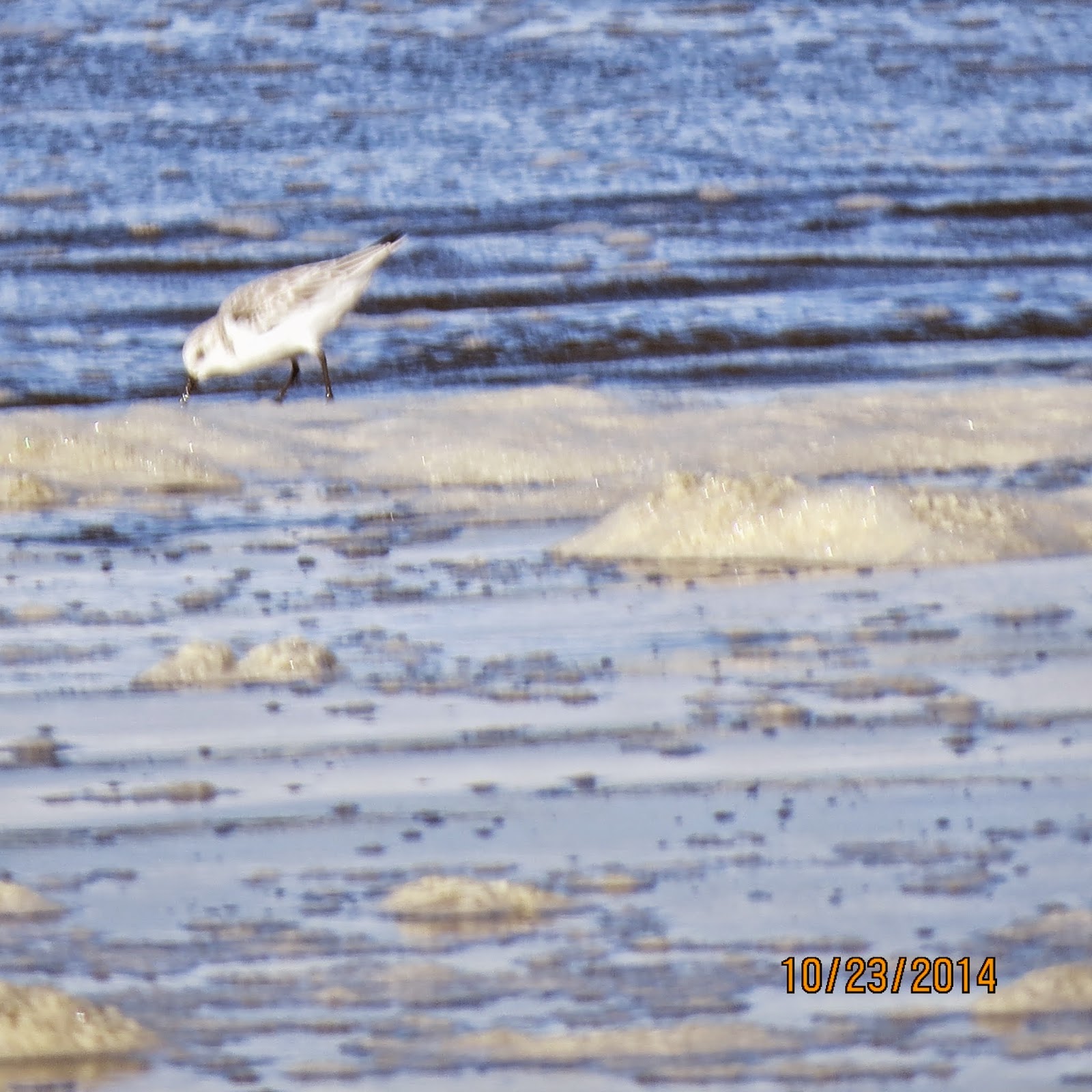 The dimples in the foreground are clam "shows". We decided to rest on our clamming laurels from our last visit here three and a half years ago. Clamming is hard work! 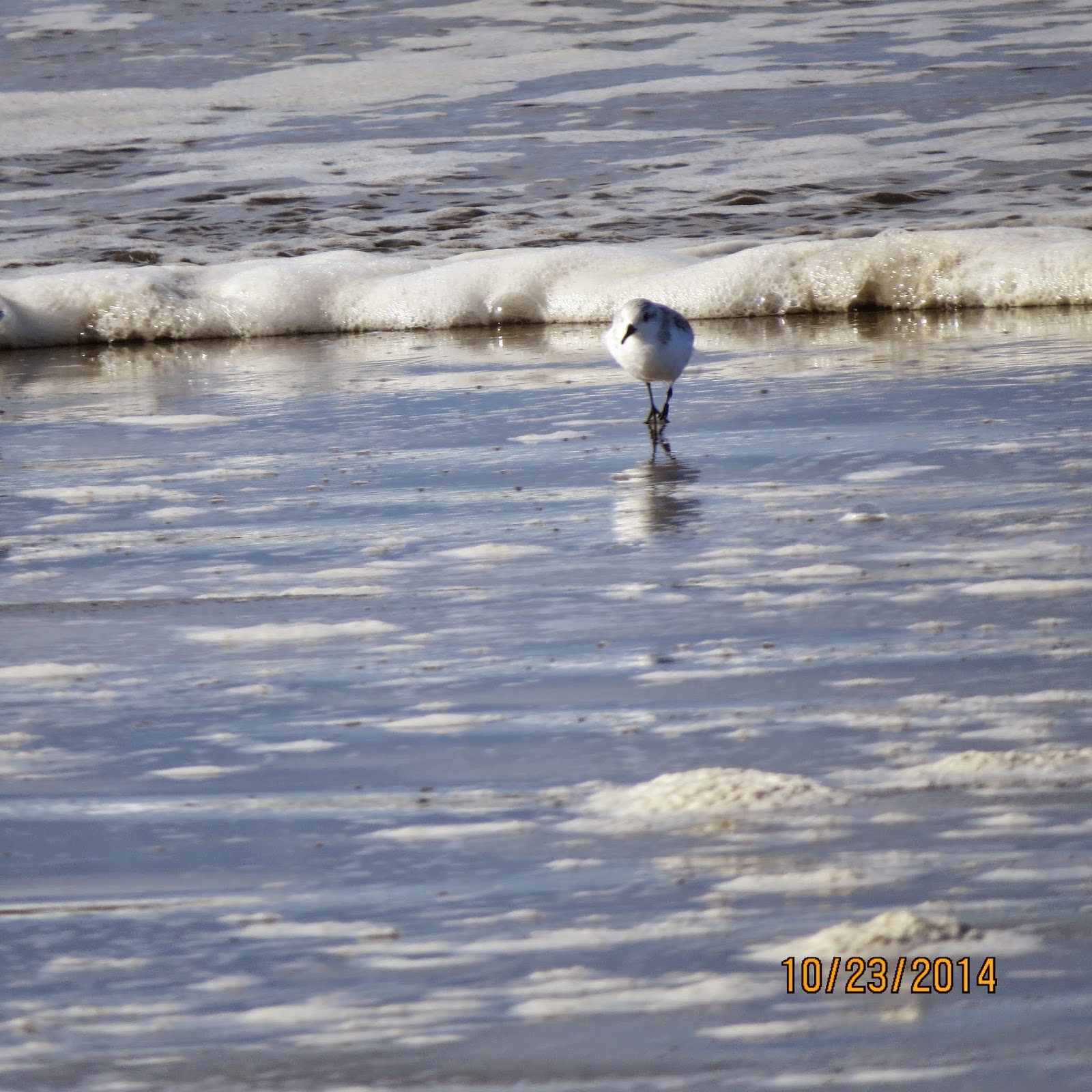 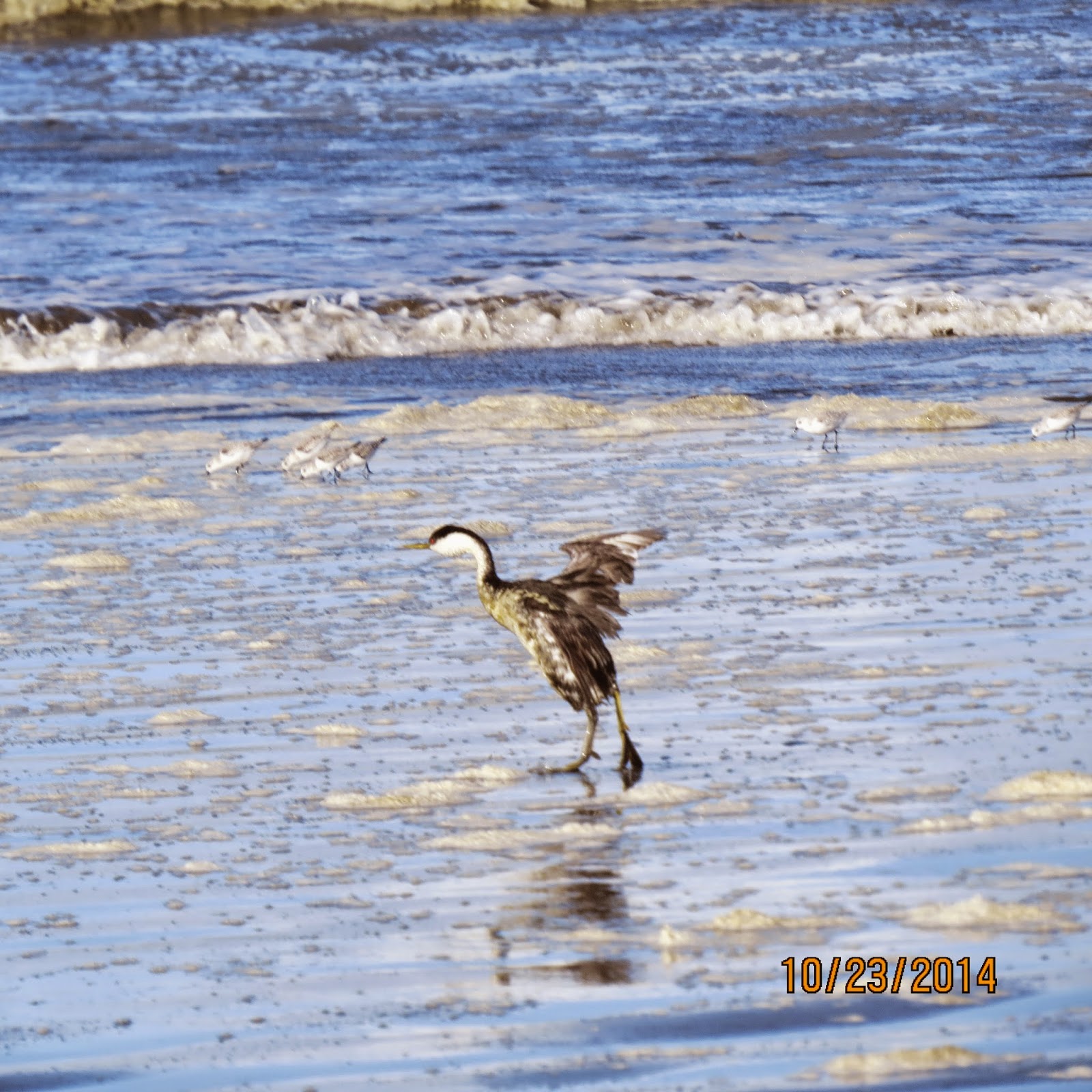 This injured bird made numerous attempts to launch itself into flight. When we returned to the same spot two days later, it was still trying. It made two final attempts, then weakened and was carried to the shoreline. The locals do not rescue these birds, but let nature take its course. 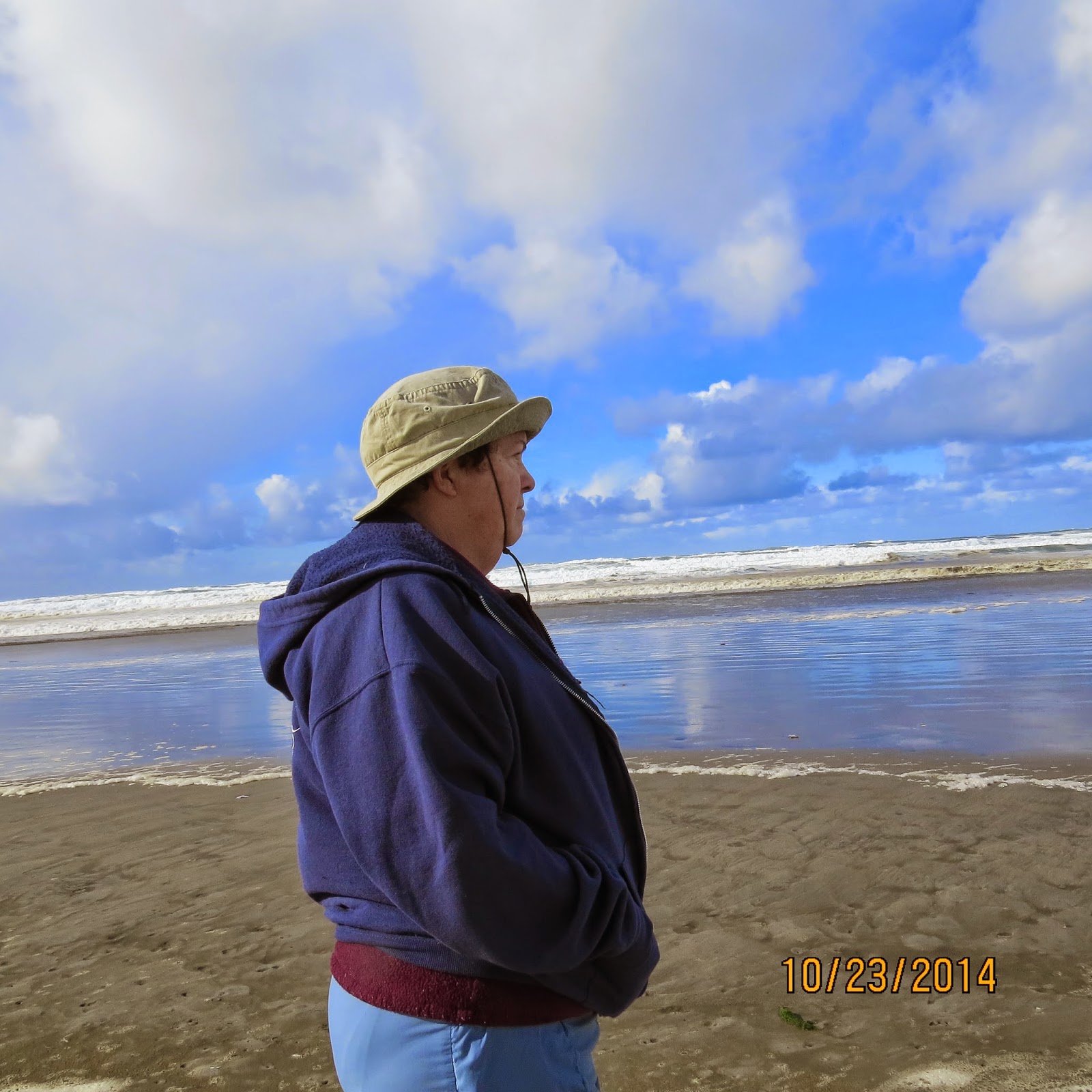 Across the parking lot from our condo, Great Day Cafe has been in business for about three years. Its owner, Steve, runs a one-man show for lunch. Arriving early each day, he cooks a roast and a turkey. Every day. And puts on a pot of clam chowder and another pot of "soup of the moment." 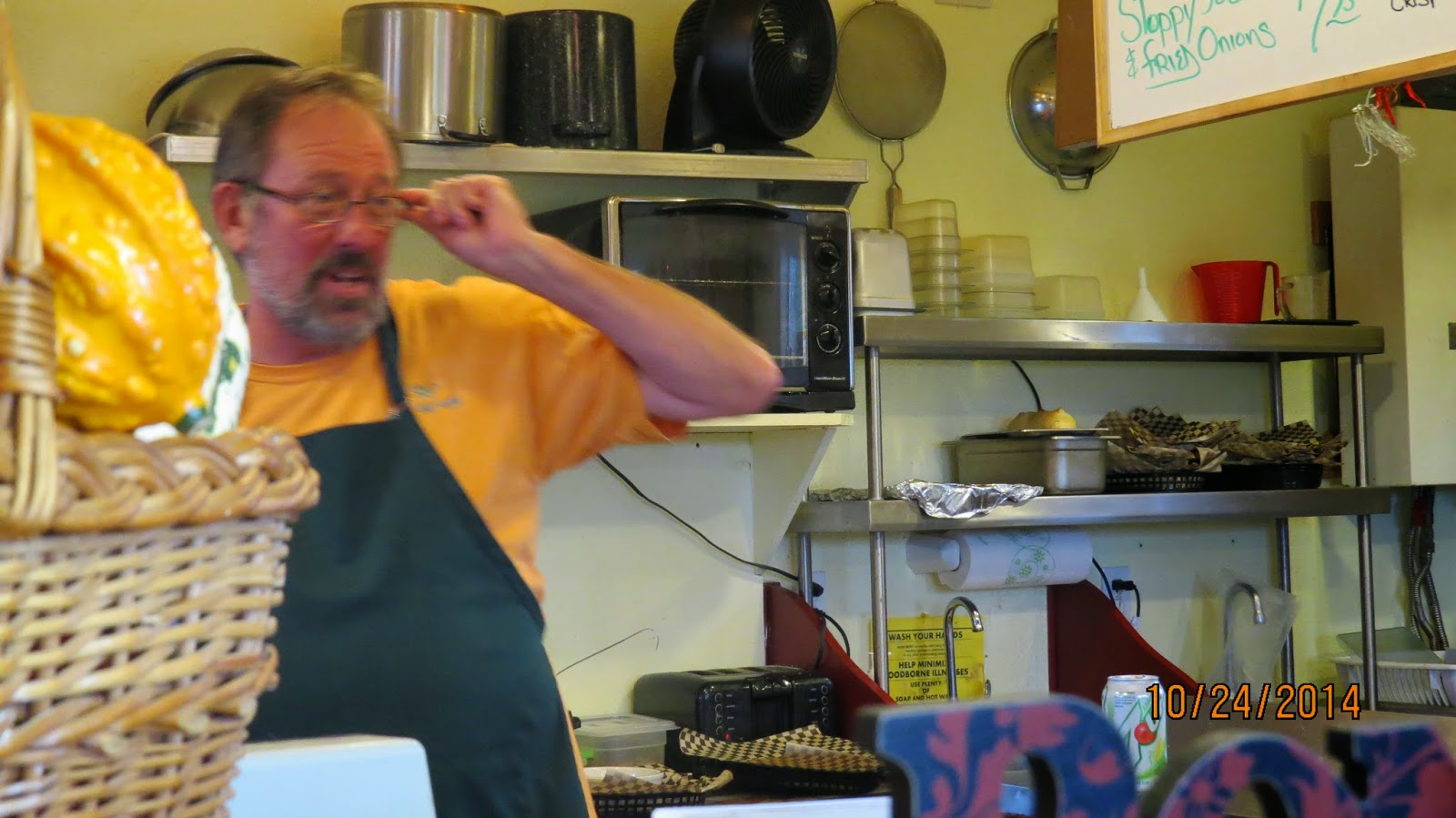 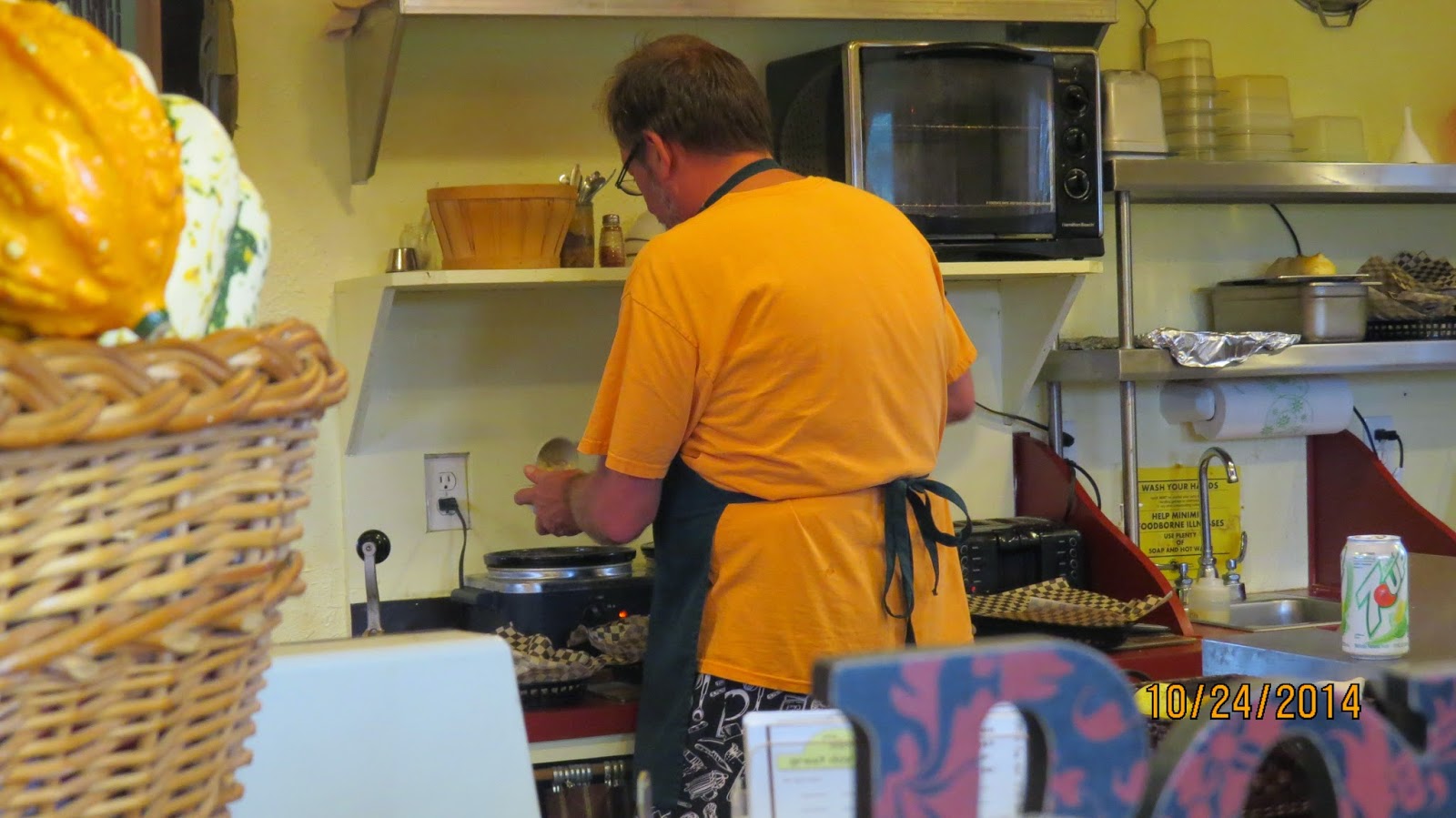 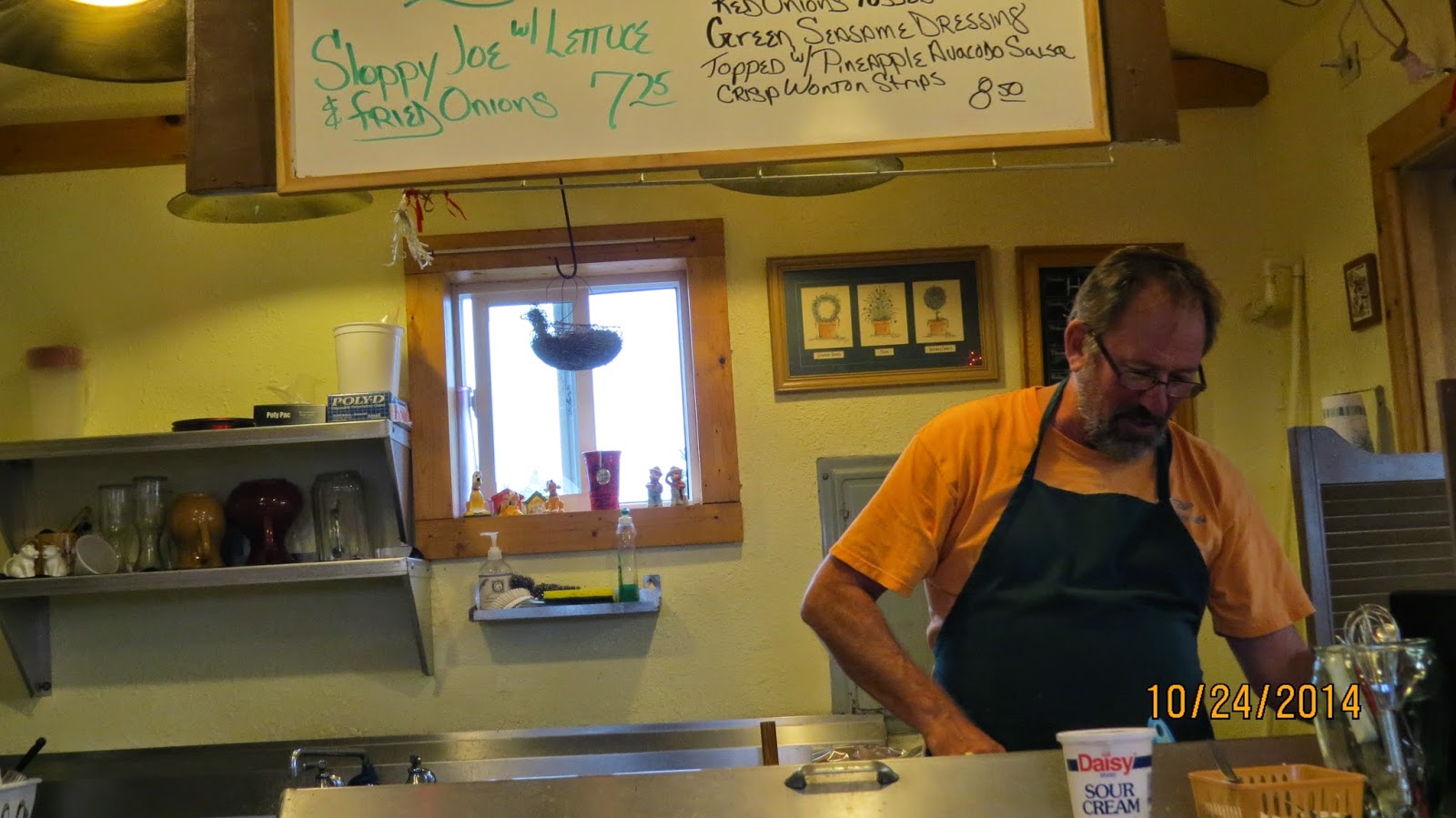 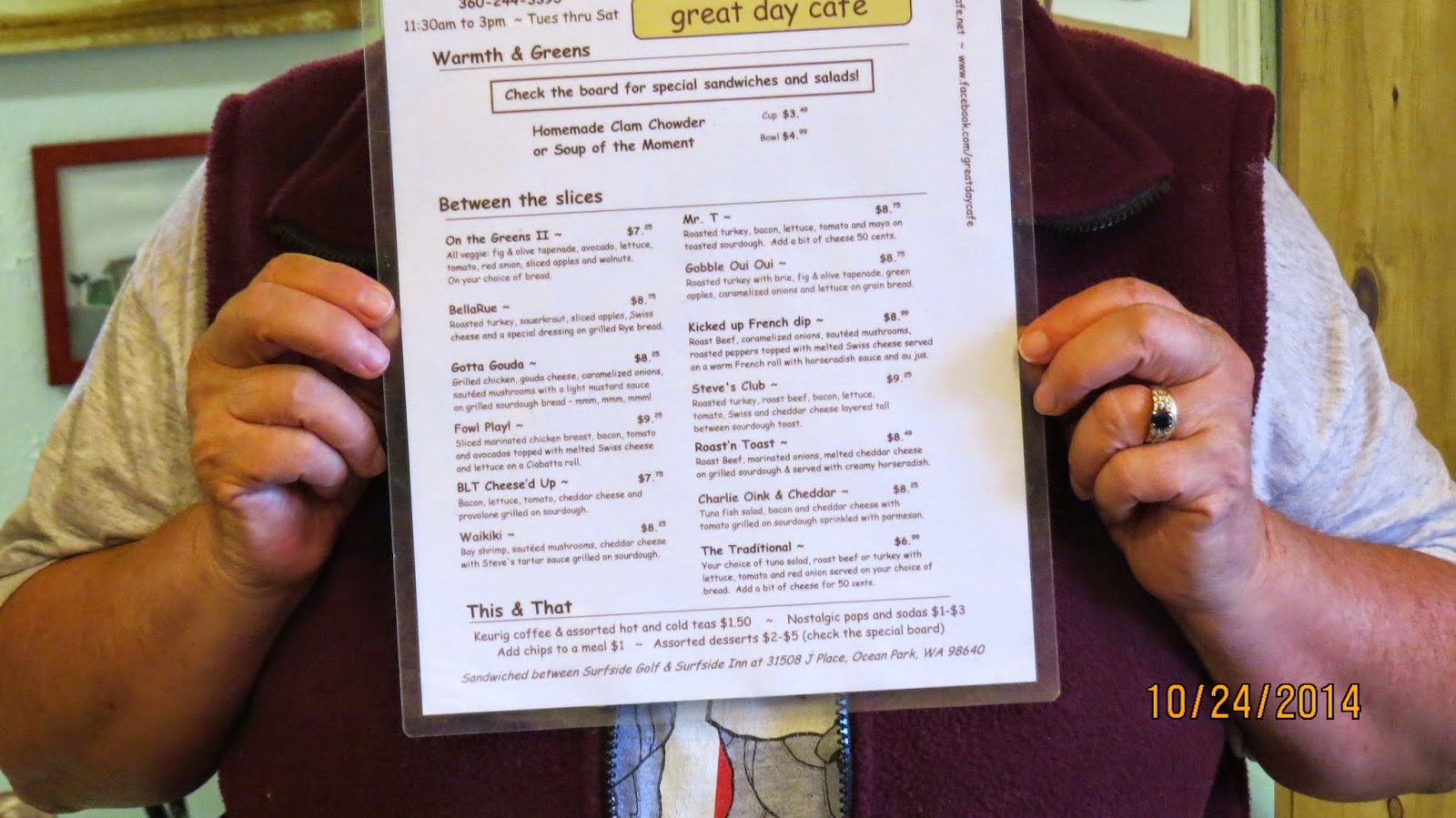 We ate lunch at the Great Day Cafe four days in a row, selecting a different sandwich to split each time from the very tempting menu - and a bowl of the finest clam chowder I have ever eaten. I can't remember ever taking a trip where lunch was the high point of our eating day.

Away from our usual activities, we had a lot of quiet time during our beach stay. I had promised myself I wouldn't talk unless Art did, and he usually doesn't, so we mostly read. It was a good break.

Art wants me to add this story about the clams:

"The wind and the waves were so rough and high that the clams used their shells as surfboards, and came surfing in on the crests of the waves. All you needed was a dipnet to dip them off the crest."

"How many clams did you get?"

Great pictures! I love the pictures of the shoreline, although the poor injured bird is rather sad. It seems like you're having a great quiet time. :-)

Thank you for the smell of an ocean breeze on this chilly Kansas morn.

I love all your photos, and I'd love to saunter into that lunch spot right now. Thanks for sharing. Oh, and I love Art's closing story, too.

It is worth a bit of bad weather to have the beach all to your selves.
I'd have had attempt a rescue of that bird and would have probably added terror to its last days.
I really enjoyed Art's story. He may be quiet but when he talks, it is darn interesting.

Nice photos -- I can feel the salt spray on my face, and almost taste that clam chowder.

What a lovely week! I am having ocean "hunger" lately, but it is an 8 hour drive..not in the budget this month either.

Ken says I talk too much,sometimes..and for him, I guess that's true.I do have quiet times as well.. but I guess guys are much more NON verbal than we are, hmm????

When do you head for Arizona?

We hope to visit the Northern Ca., Washington and Oregon coast in 2015.. probably a drive trip with stops at airbnb's and/or camping along the way...

DEar Linda, I laughed out loud at Art's final story. Thanks for including it. Before becoming a vegetarian 34 years ago, I loved clam chowder. Now I just have a vague memory of what it tastes like, but I'm glad you had such wonderful lunches while on your coastal vacation. Peace.

Lovely photos of a very unspoiled place. That sounds like my kind of cafe and I'm not surprised you ate there so much.