It's different when you own the place

After two years of renting our park model at the Voyager RV Resort in Tucson, we bought it. We like the location and the layout, and the purchase last March just confirmed what we already believed: the place was ours. It felt good to leave some of our stuff when we returned to our Pacific Northwest home at the end of the season. 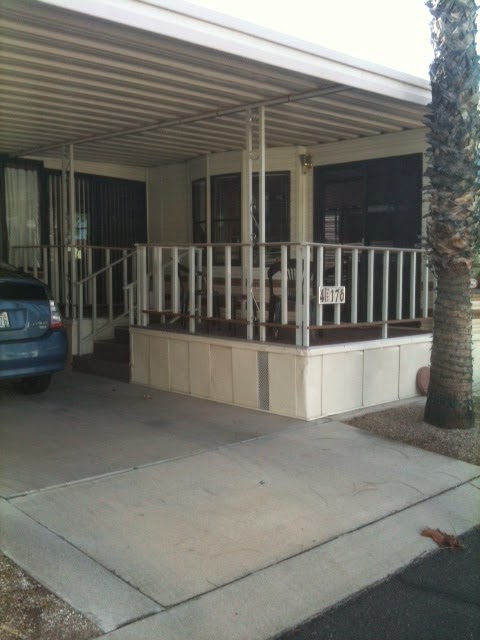 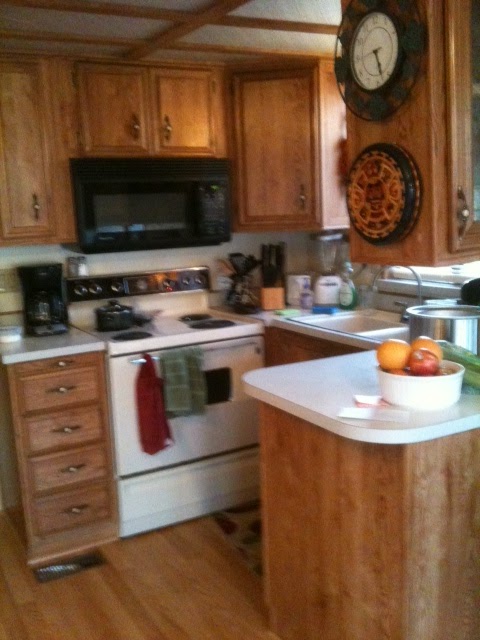 So it's time to make it our own. Here's what we've done since arriving two weeks ago:

1. We brought Larisa, our Designer Cat. Though our park model is in the non-pet section, there's an unwritten understanding about indoor cats. I have told Larisa she has to be an indoor cat during our months in Arizona. So far, she seems agreeable. To make that easier for her, we bought a cat condo - a structure for sharpening claws, climbing, and sitting off the floor. She's explored it, motivated by the treats I put on each level a couple of times a day. We've also ordered a smaller structure for by the door of the Arizona room, and a cat bed for lounging. Larisa lived under our bed until three days ago. Now she sleeps on the bed and comes out for dinner and treats in the condo. Her normal life has resumed in a different residence.

2. I brought a quilt from home and replaced the comforter on the bed. The comforter will go in a plastic bag for use by visitors who will sleep on our air mattress.

3. We bought a metal javalina at the vendor fair on Wednesday to put in the tiny desert garden in front of our park model. It's in memory of Bud, our potbellied pig, who lived to be nearly 19 and looked an awful lot like a javalina, though pigs and javalinas are not related at all. I thought it would look tacky, but where Art placed the little metal animal it looks kind of cool - like the javalina is eating the cactus out there. 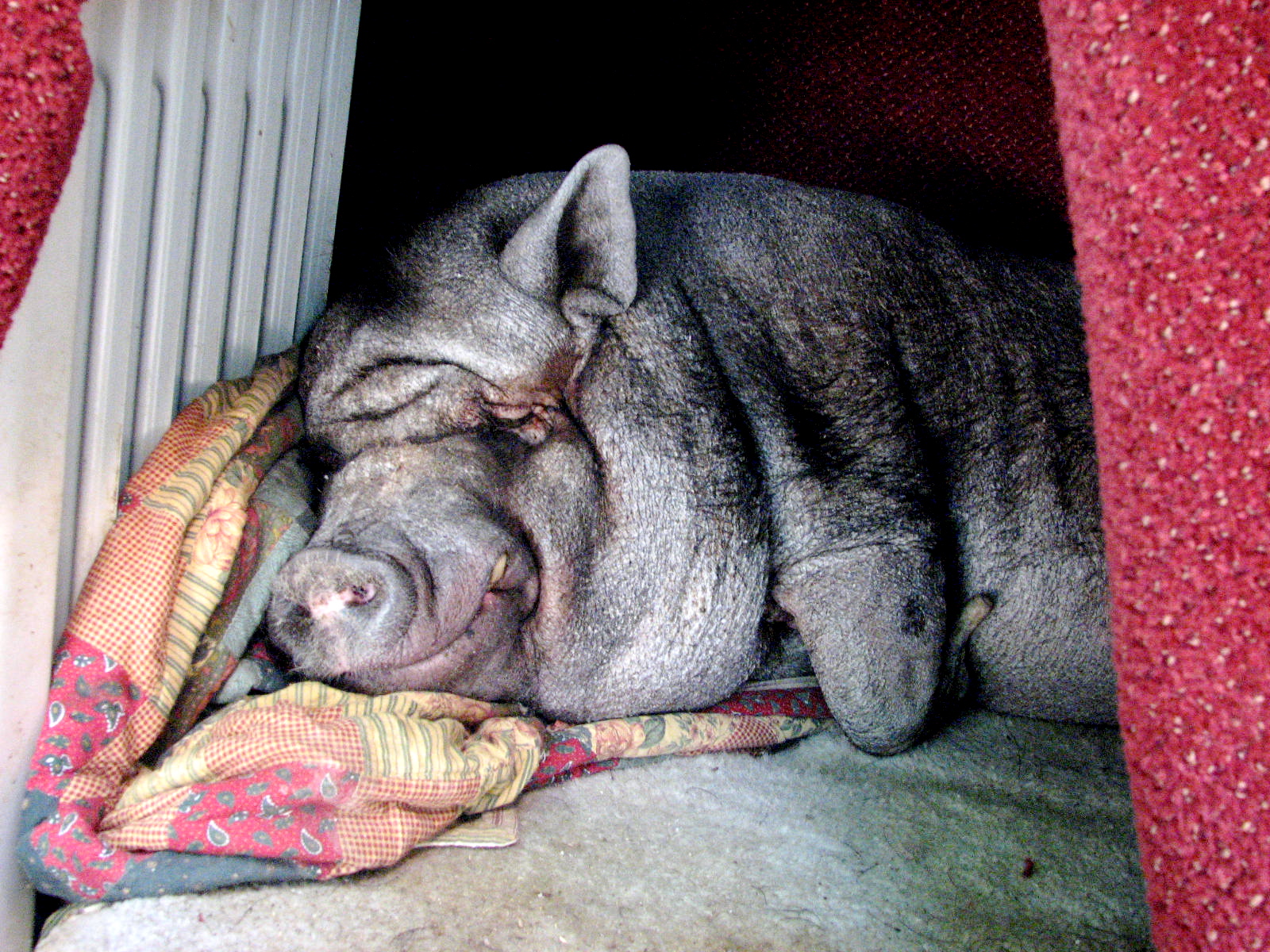 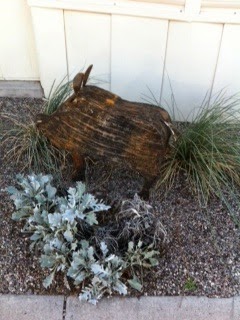 I did A LOT of internet research. Then:

4. I ordered a table with adjustable legs from Ikea. I have a standing computer table at home, and I'll be able to do the same thing here as soon as the table parts arrive. I can tell my back and neck are not crazy about my computer work at the dining table.

5. I ordered a 99-gallon deck box for storing items we need but don't use regularly: extra blankets and comforters, tools, storage boxes. It should fit just fine in a corner of our deck.

6. We ordered the parts needed to repair or replace the rods for the eight sets of one-inch aluminum blinds that cover the windows in our front room. Last year I had to stretch to reach the little turning piece at the top of the blind. Now that we own the place, we can reinstall the rods to twist instead. We also downloaded the manual for our oven and figured out how to set the thermostat.

7. We bought a Coleman portable bbq from Amazon. Actually, I ordered two by mistake. Though the shipping was free on both, returning one of them will cost $45. So I've placed an ad on the bulletin board in the activities complex to see if we can sell it to avoid the return postage. I figure one mistake is human, but I wish the extra something had been more lightweight.

8. We set up two laptop computers and a wireless printer. The printer ran out of black ink quite soon so I have ordered more ink - an ongoing expense, unfortunately.

We're pretty much set up now, so we're getting on with our winter activities.

9. We started our community activities: we took line dancing lessons on Tuesday. On Wednesday morning Art sat at a table at our every-other-week vendor fair and sold four of our Vietnam books. He told me they would be Christmas presents. He also talked to four Vietnam vets who came by. In the afternoon I went to the current events discussion. And Art has signed up to be in the cast of the Second Annual Voyager Light Opera's play, Guys and Dolls (abridged version). He had rehearsals on Monday and Thursday afternoons and, as of today, has purchased his costume and props from Goodwill in Tucson.

10. And we both have bad colds. Climate change, maybe?

You might want to consider a laser printer instead of an inkjet. I've had a Lexmark one for over 10 years and only have to replace the cartridge about every 3 years. I print about 3-5 pages per day. If I need color print I go to Office Max

It's pretty exciting to have a second home, and nice to know this one, having given it a good test run!
I like the javelina. It's a cute little thing. Hard to believe they aren't related to potbellied piggies, but I suppose every cute thing can't be related to every other cute thing!

You have definitely been busy. I'm sure you'll be able to find a buyer for that second barbecue you inadvertently purchased. It sounds and looks like you're all set for the winter, Linda. Good for you and Art! :-)

Didn't know about your pot bellied pig. Wow, that is a long time. Must have really hurt to lose her.
Sounds like you are having fun setting up house #2. So glad the cat has settled down but so sorry you both have colds.
Do take care and be well soon.

Sounds like you're right at home ... good for you!

you really are turning your park model into your second home, Linda. Have fun.

You are really doing lots of things to make yourselves at home. Enjoy!

Congratulations on your smooth move into you winter abode!

Your remarks about the javelina and pot-bellied pig reminded me of a great children's book about javelinas: "Don't Call Me a Pig!".

I agree with Bonnie. I got sick of spending enough on ink every six months to replace the entire printer so I went with a Brother laser printer. It is on the small side and is wireless. The toner drum lasts me almost a year. Yes, it is only B&W but that is a tradeoff worth it to me for the hundreds of dollars a year I am not spending on ink.

Sound like a lot of fun. I have thought of doing this, but still like to play in the snow, just losing ambitions of driving in it.