The Annoying and the Just Plain Fun

I do this to myself. I get asked to do something and I am flattered and I say yes.

Two winters ago I signed up for a program called Great Decisions. It's a national program for groups to read about and discuss foreign affairs issues. I knew very little about foreign affairs but I was curious to learn, so I went. I had to give a presentation - lead a topic discussion, that is - and I was very scared, like I'd signed up for a class but never had gone and was now heading for the final. I felt like an impostor. But Dick, the facilitator, asked me after that meeting if I would be the facilitator for the group for the next year. So I did that. And now I am doing it again. I still don't know much about foreign affairs. But coordinating a group, from signups to assignment of topics, to juggling the doctor appointments of presenters, to planning a season-end potluck, takes some time. Fortunately, I'm good with details. And the people in my group seem to like what we do. But it's no longer flattering. Just annoying sometimes.

I'm also in this discussion group called Reimagining God. It's mostly people who were in churches and left them or people who never had much religion. This group is mostly liberal in politics and spirituality and I like going because I have my own spiritual-but-not-religious thoughts and I'm interested in hearing about the opinions of others. So this year, the woman (a retired Methodist minister) asked me if I'd be on the steering committee for the group to format and guide the discussions. I was flattered and I said yes. Now I find myself doing a little mediation as ideas not held in common get discussed. I know I'm needed, but it's a little different from what I had in mind.

Those annoying things are of my making, but this last thing is not. We paid $80 to go on a tour at dusk last Friday to watch the sandhill cranes coming in from the fields for the night. Thousands of these birds winter in the area about 80 miles east of us. We went on the tour, but we spent our time near a lake watching other birds, and then at an observation deck watching the cranes from a distance. Then we came back 45 minutes before the tour was supposed to end, without ever going to see where the cranes came in to roost in the evening. It was like the tour guides forgot to take us there. When we got back to the administration center I complained - politely. I told the lady we wouldn't have paid for a tour that didn't include the dusk viewing. So the head of the Wings Over Willcox festival is going to call me in the next day or so. I'm hoping for a refund. Then we'll go over there on our own and watch the cranes. 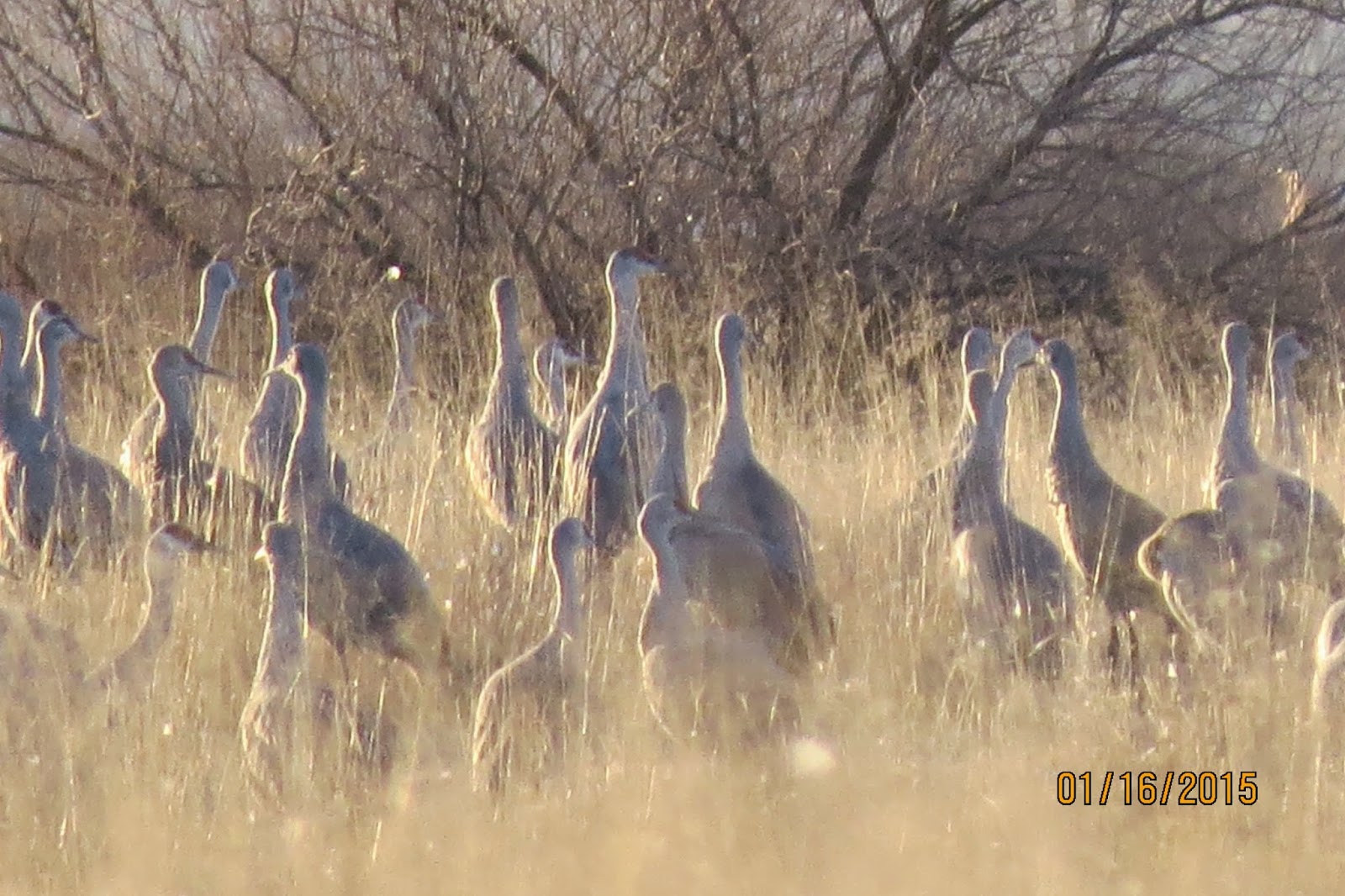 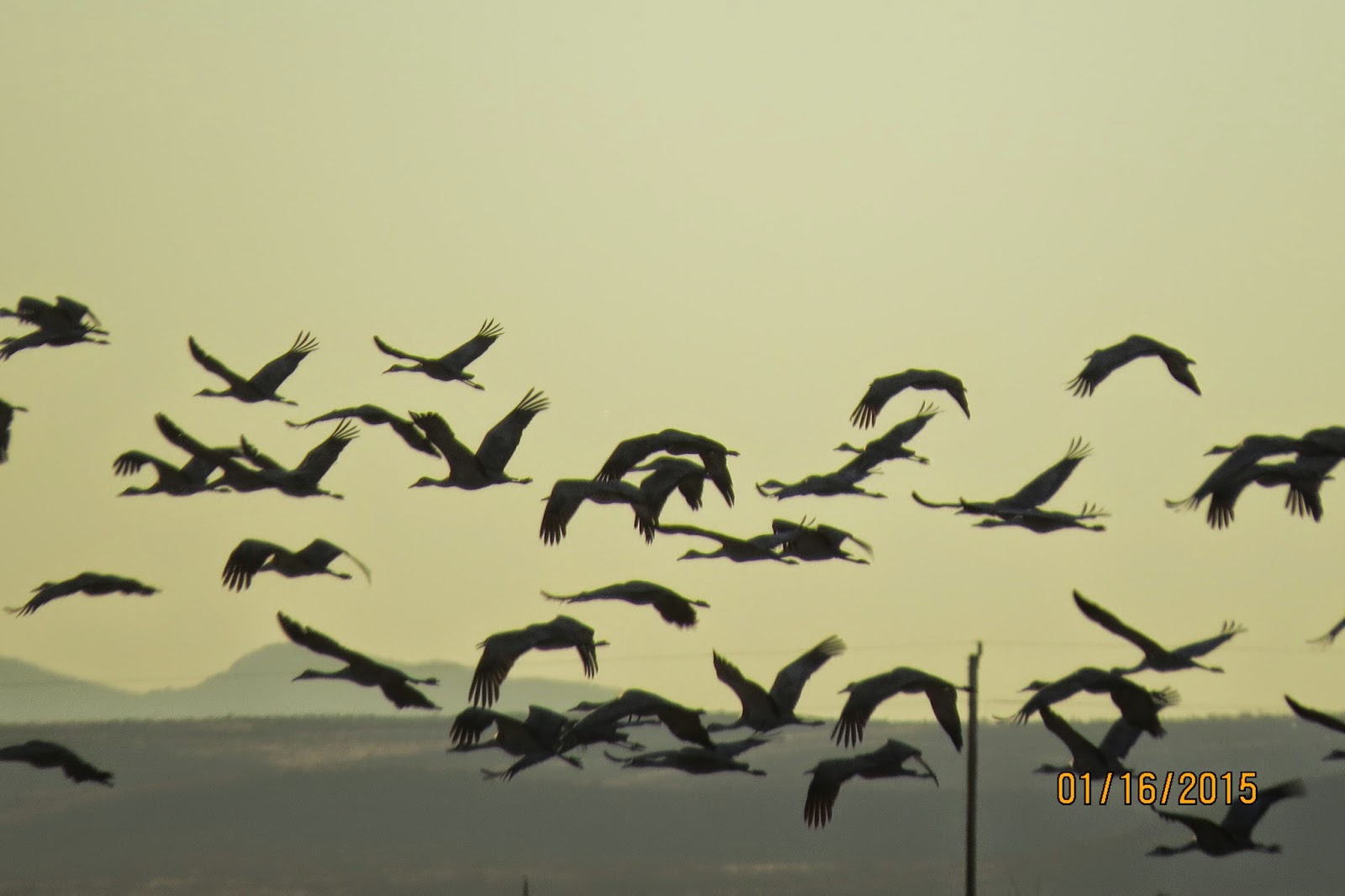 And in the Just Plain Fun category? When we're home in Washington, we rarely have anyone knock on our door. Usually I meet friends for coffee or email or text. Here in Arizona, people just knock on the door. "Hello?" It might be our friend Judy wanting to know if we'd like to go to dinner and a movie, or our neighbor Barb offering a start from the plants she picked up yesterday at the nursery, or our old friends Ann and Larry stopping by to let us know they've arrived at the resort. Things are quite spontaneous here. Last night we did go to dinner and a movie with Judy and her husband Ken. We saw "Wild". It was the first movie we've seen in a theater since last February, when we went with Judy and Ken to see "Nebraska".

This week we will be planting spinach and lettuce and peas and radishes in a tiny garden in back of our park model. We'll eat them by April when we go home. And in May we'll plant the same things in our garden at home. Like Groundhog Day!

Life here has a light touch.

We went down to Wilcoxx for Fri/Sat to see the cranes. We didn't do the tours, we just got a map and went for sunrise Saturday to the place with the guardrail by the Power plant and then for sunset to Watershed Draw, over by McNeil. It's not common for the birds to take off all at once or land all at once but we saw them in groups at sunrise and I got some great pics at sunset. Sorry you had a bad experience, just go down again anytime before the end of February

Obviously you have leadership abilities. It is okay to sometimes say, "I am flattered to be asked, but no." I think you are drawn to these learning opportunities though.

I loved "Wild" but was knocked for a loop by "Selma," which I saw yesterday in honor of MLK's birthday. You are an organizer indeed, Linda. Because of you I have five new "skin" friends that I visit once a year. :-)

You do what you do best, appreciated or not.
I see that your complex is quite friendly; dud you know that before you bought in?

Why don't you answer the people who give comments on your blog. I think that is rude

Wow, you are involved in diverse activities. Sounds like you are staying busy there in Arizona.

Eve - I don't understand what you mean by "comment". Do you mean respond to each comment with a comment of my own? I do not see that done often.

If a comment asks me a question, I often go to their page, find their email, and send them a response.

I enjoyed reading your post and the other comments, and then I was thrown for a loop by Eve's comment. I handle questions the same way, sometimes. I know there are some bloggers who have a "reply" format, but I don't even know how to do that. I never check back for replies anyway. Hmmmm. I had no idea I was being rude. Oh well.

You are a good organizer. Every group needs someone to step up and lead, and most often that person is not appreciated for all the work that they do. Like DJan, I appreciate all that you've done to keep our Vashonista group going.
Hope you get your money back!

There is a Great Decisions Group that meets in Tempe. I was unaware of the group until your mention. Thanks, Linda.

Re: someone knocking on the door. -- I think this type of informality is part of what people find so appealing about the RV way of life. We are, to a certain extent, isolated in our suburban homes,, and appreciate the ease of meeting others in a different environment.