Six girls and a grandma: Girls Night Out

My granddaughters Mary and Malayne are 14 years old. They moved to Spokane two years ago from southern Oregon with their mom and stepdad. I used to see them more often than I do now because my son and their mom used to live in the same town. Now they don't.

I reconsidered and decided on Red Robin. From my Google map I could see it was considerably closer to Mary and Malayne's house than Domino's.

When I got to their house, Malayne came running to me in her bathing suit (all the girls were in the pool). "Grandma Linda, we have a problem. We accidentally invited four friends."

I thought about the midsize car I'd rented and knew it didn't have enough seat belts. "Dan," I said to their stepdad, "Can you drive a few of them over?" Dan said yes.

Eventually all six girls - Mary and Malayne, Rachel, Demitri, Amelia, and Kyia - changed out of swimming suits and showed up ready to go and we took off for Red Robin. We had a 20-minute wait for a table for seven. The girls waited outside and I kept an eye on them from inside while I waited for my name to be called. 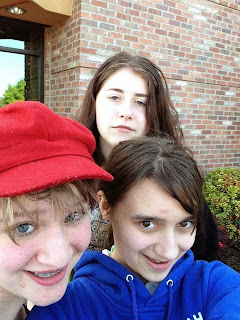 Once seated, the girls giggled and texted and ordered their drinks and their meals and shared their food and took selfies and sang The Cup Song and some others I didn't know, from their glee club. I had told them this was Girls Night Out, and they liked that idea. I chatted briefly with most of them and watched and listened for the rest of the time. All nice girls at the very end of the first part of their lives. I am happy about the friend choices my granddaughters have made in their new city. 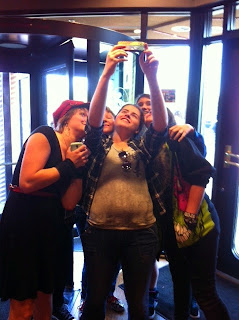 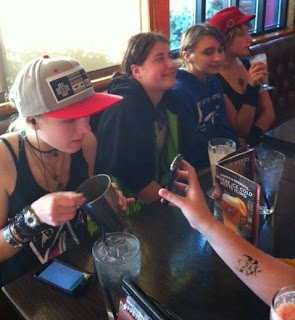 Malayne was to let Dan know when we were ready to leave. The girls were finishing up. I said, "Layne, is it time to text Dan yet?" She said, "Not yet." Everyone was still chattering and giggling and texting and singing. Fifteen minutes later the server came around with the bill. I paid it - $112 with tip - and we left.

We waited outside for Dan to arrive. More singing and giggling and taking of selfies, stepping on and off benches, hanging out with each other. 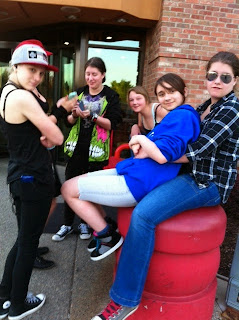 More giggling on the drive home, "their" music on the radio, who had a crush on what boy, much discussion of "Supernatural", their favorite show.

When we got back to the house everyone piled out of the car and ran inside to wait for their parents to pick them up. I stood outside with mom Rebekah and stepdad Dan, talking about their new lives in Spokane.

Sounds that you had a great time with your family members! Have a nice time!

Having a granddaughter that age--I completely relate. Glad you had a good time, accidentally.

You bravely jump into every experience and what an inspiration that is! :)

It sounds like it was a fun experience for everybody. I see they are completely connected with their phones, just like every other teenager, I guess. :-)

For six teenagers you got off really cheap!

What a great idea to make a party of it. That is one they will remember and will have a zillion selfies to prove it. Way to go Grandma.

Our daughter, being an only child, always got to bring a friend or two along on outings.

Then she went to college in Oregon and when we visited we would always take all of her "gang" out to dinner at least once while there.

When they graduated, we hosted a big dinner for friends and their families at McMenamins in downtown McMinnville. Those were indeed good times. Hope you get to do it many more times with those precious granddaughters.

You're a wise grandmother. Allowing the girls to bring friends was a sweet gesture. It's good to make memories whenever possible.

Good for you! In doing what they liked, you had a good time too, and got to know your granddaughters better. You are so wise.

Excellent adventure! You found a great way to stay connected with the girls, and I'm sure they will always appreciate that.

Just read this post and the one before. You sound happier than I've ever heard you. I love that you got this time with all that great girl energy and recognized it for the gift it was. What struck me in your previous post was the part where you've replace St. John's Wort with raspberries. The symbolism there seems a perfect analogy for your life right now. Lovely writing, inspiring to read.

What a great way to stay in touch with what’s what in the world of today’s teens.
I have grandsons who live 800 miles away. They are only 6 and 7. It’s hard not to have them in my life.
It’s nice that you were able to spend time with your girls. :)