Our travel day was surprisingly easy. Our friend Lillian gave us a ride to the airport. Check in and security were a breeze. The British Airways flight left on time at 2:00 p.m. We ate dinner within an hour and breakfast about six hours later. At London Heathrow we were loaded into buses rather than ascending a jetway; apparently all the gates were full of other planes at Terminal 5. Walked down a hall at Terminal 5, descended a flight of stairs and were loaded onto another bus for Terminal 3. For all the departures, the gate assignment isn't announced until 20 minutes before boarding, so passengers wait in a retail/restaurant area. What a good revenue-generating idea!

The flight to Prague took about an hour and a half. Green countryside with rolling hills and scattered villages with red tile roofs on the houses. The taxi drive to our hotel in Old Town Prague took 20 minutes. A beautiful drive into the city, very clean.

Here's Hastal Hotel, our home for the first four nights. It's a Rick Steves recommendation and where our group will meet up in two days. 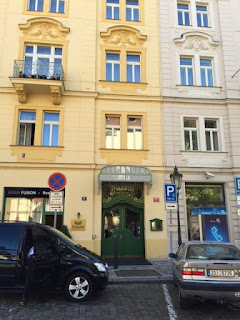 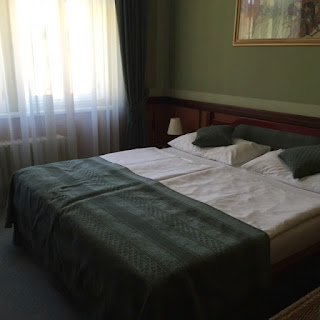 We unpacked and took a two-hour nap, then roused ourselves for a walk to find dinner. Lots of sidewalk cafes with varying types of food. We ended up at a Czech place. We asked for water and it arrived in a carafe with two empty glasses and one filled with ice! A first for us. 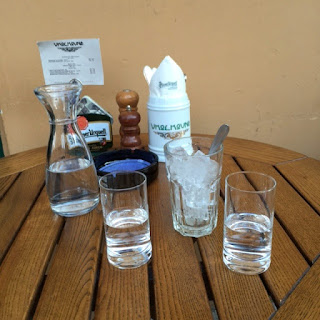 I ordered pork and Art's choice was beef goulash and dumplings. We split our orders and shared. 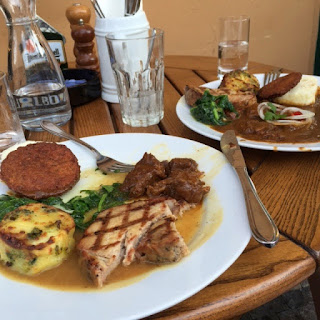 I heard several languages being spoken around me, none recognizable. Fortunately, the servers all spoke English. I learned my first Czech word: thank you is Dekuji (dyeh-kwee). Our server grinned when I finally got it right. I'll put it on a post-it note and carry it around with me. A little effort goes a long way with words, I've found.

Here we are at dinner, not even looking too jet lagged. 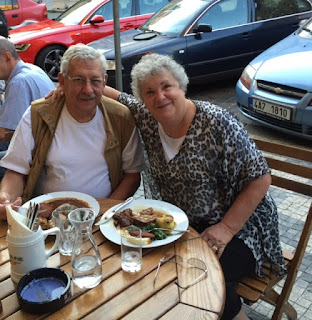 Best wishes on a great trip. I collect "thank you" in as many languages as I can. I think that learning that much of the language is a must. You are right that the locals all appreciate the tiny bit of effort.

Oh, I think I'm jealous. I'm a little bit Czech, and I wanted to go there years ago but it didn't pan out. Have a dumpling for me, please!

Fantastic! You both look almost rested, after all that travel. What a great adventure you've embarked upon! :-)

Looking forward to reading more about your adventure. Glad it started off so well.

An auspicious start to your trip...enjoy every second of it.

I see you're off again to another part of the globe. Dekuji for the report ... and keep us posted!

I'm just reading these. So excited to read the rest. A great start...