I have kept all our annual holiday letters since I started writing them on my computer about ten years ago. They're almost like a journal of our lives through the years. We used to list all eight of the kids in our blended family and what they were up to. This year we only mentioned one, Pete, and that's because he lives with us this year.

I have friends who have given up the letter-writing tradition. Sometimes it feels tempting, but my husband Art wants me to send them out still. He has many family members and even though they may not see each other often, they're a loyal bunch.

This year I decided to do it differently. I wrote the holiday letter, but I'm only sending them in cards with an envelope and a stamp to people without an email address. Everyone else gets an email. Or they can read it in Facebook. Or in this blog post! I'm going with the times in some ways, but the wishes are just as warm.

It got cold and rainy at home in early November, and Art was bothered by his arthritis. I asked him if he wanted to come to Arizona early next year instead of waiting until December, and he said “Maybe”. Notice how our time here is expanding?

At home in Washington, my sister Alyx and her husband Virgil still live in their RV on our property. Alyx was the lead gardener this summer, and we had three or four plantings of beets, carrots, spinach and radishes, plus kale, several varieties of lettuce, green beans and squash. Plus many strawberries, blueberries, raspberries, and an enormous number of table grapes.

Art repurposed the kids’ play area, unused for at least a decade, and built a chicken coop and run. Alyx has now raised six chickens from pullets and they produce four to six eggs a day. Most likely that will stop soon because of the dark and chilly weather. Still, those eggs really do taste different from the ones sold in the grocery store. The yolks are so rich that if I cook fried eggs I have to lick the plate to get the last of the yolk! Well, I’ve only actually done that a couple of times, when no one was looking.

Art’s son Pete is renting a room from us while he attends nursing school. He’s very tidy, a good cook and an agreeable housemate. He is gnashing his teeth over the school challenge but is doing well. He worked the night shift at an assisted living facility place this summer and learned that he doesn’t want to be a geriatric nurse. Too bad for us!

Art and I traveled to Atlanta in July for a convention. I was sick in bed for all four days, but Art had a great time. In September we spent three weeks in Central Europe with a Rick Steves tour. We added pins to the world map in our entryway for the Czech Republic, Poland, Slovakia, Hungary, Croatia, Slovenia, Austria and Germany. One of the most memorable experiences was being stranded in the Saltzburg train station because there were refugees on the tracks and Germany had closed its borders. There were also refugees in the train station. 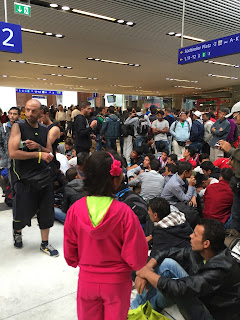 We found an alternate route to Munich. Now we have personal experience with one of the big news events of the year. I also took solo trips to Muskoka, Ontario (two hours north of Toronto) and Santa Cruz to visit a friend.

The Voyager Light Opera Company is putting on “Oklahoma” this year, and Art has a lead. Rehearsals started a month before we got here. Fortunately, he got the CD ahead of time and has been singing in the car every day. We ALL know Will Parker’s songs! The Light Opera Company is the theatre group here at our resort. Last year the group did “Guys and Dolls”. At 72, Art was one of the youngest in the cast! It was his first experience ever. He can sing and he can dance and he has a comic presence on stage I never would have suspected.

I have signed up for fewer activities here than in years past. In the quiet of my tiny home I want to complete the Rosetta Stone Spanish course and write the book I have in my head. It will be called “Why We Travel: A Love Story.”

Wishing you all the best of holidays!

Happy Holidays! We're going to take a side trip to Arizona on our way home from San Diego this Christmas. The spouse wants to check out RV parks in Yuma. Maybe next winter we'll be in Arizona too! We're not taking Stanley with us on this Christmas road trip. Wishing you and Art all the best this holiday season!

What a wonderful, positive Christmas letter! I enjoyed it, every little bit, Linda. I laughed at the egg yolk story but sure wish I had some of those great eggs! :-)

I wonder if you can hear how much happier this letter is. It fairly sparkles with light, as do you, my friend.

That is a wonderful letter--upbeat, informative, and concise. Enjoy your winter-long holiday!

B also writes a family letter that she sends out with her Christmas cards. As you suggest, it seems almost quaint in this age of facebook and twitter ... but quaint in a good way. Your year sounds more exciting than ours. We had a wedding; that was the big event in our extended family. Anyway, happy holidays, and have a wonderful time in Tucson!

What a warm and friendly letter! It's good to know your status at this stage. York blog mates appreciate it.

My old college roommate mentioned in her Christmas letter that she will be playing " Laurie" in a production of Oklohoma at the Voyager RV resort. Sounds like one and the same as yours. -- Small world! Say hello to Rossanna!

Thanks for sharing your letter with all of us. I feel like one of the family.