We bought our park model in Tucson after renting it for two winters. 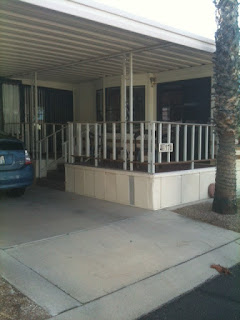 Owning the park model meant we could bring Larisa, our Designer Cat, with us. We call her the Designer Cat because she is a hypoallergenic, purebred Siberian Forest cat, mother of 26 kittens like her before she came to live with us. Larisa thinks she deserves to be Capitalized. 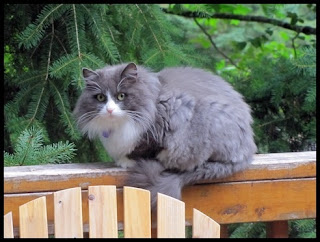 Last year when we arrived, I went to PetSmart and bought a cat condo and a covered cat bed. I placed the condo near the window so Larisa could watch the birds outside.

For four months I placed treats every day on all three levels of the condo and in the cat bed.

Larisa caught on quickly. At least five times every day she checked out the condo and the bed, even though she only got the treats once a day.

But she slept elsewhere.

At the end of the season the 55+ resort where we live has an all-park yard sale. I put the cat bed out, asking $20 for a new (except for entry to retrieve treats) bed. No one bought it. At the end of the day we took all other unsold items to the Salvation Army truck. The cat bed was so nice, though, that I couldn't give it away.

Then we went home to Washington State for eight months.

We returned to Arizona in December. When I let Larisa out of her traveling bag, she knew where she was. She found and used the litter box in the Arizona room. She took a nap on our bed, on the back of the loveseat in the front room, on the back of the sofa in the Arizona room. I don't know whether she remembered the place visually, or by smell, but clearly she knew she was home.

For the first three days she checked the condo and the cat bed for treats! Finding none, she stopped looking.

And then - a year after the cat condo and the bed were offered, the Designer Cat decided.

She still slept in all the old places, too, of course. But the condo is close to me when I'm working, and the bed is behind the couch in the Arizona room - private and near the sunny window on cold mornings.

Apparently Larisa found another private space all on her own. Last night I was awakened by a cat's meow. I searched the place but couldn't find her. I even peered outside to the deck. No cat. So I woke Art up and asked him to look.

It didn't take him long.

Apparently the Designer Cat can open drawers from the outside now. But not from the inside.
Posted by Linda Myers at 4:43 PM

It's impossible to figure out a cat!

She is a beautiful cat. Hard to imagine a fluffy ball of fur like that is hypoallergenic, but isn't it grand that she is!

There's a protein in the saliva of most cats that's the allergen culprit. She doesn't have that protein.

Larisa does look like she considers herself a Very Important Cat!

Aren't you glad you kept the cat bed. It would s nice that she can come with you on your travels.

Nice! And cats just love places like that cat bed. Good thing nobody wanted it. I laughed to think of her in that drawer. She's beautiful all right. :-)

So glad she finally accepted the places to sleep that you provided. She definitely is not one to rush into a decision:)) How funny about the drawer. She is a beauty.

I can hardly wait to meet this character! What a fun piece to read.

Great story Linda... After rescuing our cat Callie from the shelter, we came home one night to all the cupboard doors in the kitchen and bathrooms open... nothing was missing, and finally figured out it was Callie. If we don't see her for any length of time we know to go looking in cupboards, drawers and closets as she can't meow!

What a gorgeous cat! And hypoallergenic to boot! Perfection!! No wonder she is so regal and covers so much territory in your home. I'm so glad she has rediscovered her cat tree and little bed. It usually just takes time, acceptance coming at their own pace. I'm saying this as part of a family that includes four cats! Loved your story and your pictures!

First of all, Larissa is a beautiful cat. She also is quite a smart lady. I love this story. It is so typical of cats. She had to let you know that she was in charge.

Cats change, I’ve observed. After nearly 44 years of dogs, my wife and I finally got tired of walking them in the Oregon rain, bathing them, putting them out to go potty, and wiping their muddy feet when they came back in, so we now have two cats. One is a 16-pound, five year old male and the other a six-pound, five month old male. We worried how it would work out as the older male had never been around other cats, but when the kitten walked right up to him as soon as they met, he was smitten. He loves his new buddy, bathes him, plays with him, and, sad to say, nurses him. I look forward to an end to the nursing, but if I discourage it when they’re with me, they won’t be with me, but they’ll still nurse.

Cats are definitely surprising creatures, they do as they want, and fully expect us "pawrents" to do their bidding. But they make use laugh and bring such enjoyment, who would have it otherwise.

One of my cats, Silver, used to do the same thing...find a way into a drawer and cry like crazy when she couldn't find her way out.

I never get tired of stories about cats. They are without a doubt the most interesting creatures ever created. If we could see what went on inside that head we might surprised. On the other hand maybe there isn't a whole lot going on in there beyond what feels good and what works for the cat. They all take self-centered to a whole new level.