The first five days at "my" refugee camp in Oinofyta, Greece

I left Oinofyta refugee camp on August 27 after volunteering for six days. I returned on October 19 for another two weeks.

It has been less than eight weeks since my first visit ended. Some things are the same: children chasing each other and kicking a soccer ball and riding bicycles and roller skating and playing with Jackie, the camp dog. Women hanging laundry and cooking and gathering. Men gathered in clusters and playing volleyball in the evening. 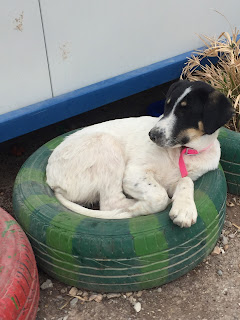 But some things are quite different.

There is a sewing room now. Donations of sewing machines and fabrics and notions mean women can make fleece linings for their babies’ sleeping boxes, and clothes for their children and themselves. I notice that both men and women Afghans sew, and that they use no patterns when cutting fabric. They’re freeform and they look good. I brought fabric and notions donated by my friend Lillian in an extra suitcase and they are already being used. 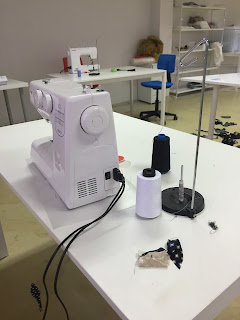 There is a beauty/barber shop now with simple furnishings, two chairs, mirrors and the equipment and sundries needed. One of the volunteers is going around the camp with a translator to identify the barbers and stylists and manicurists. These people can volunteer for hours they’ll work. They will not be paid, but they’ll receive certificates so that, when they settle in a final place, they’ll have proof that they kept their skills up while in the camp. One of the camp residents will carry the key to open up and close the shop. 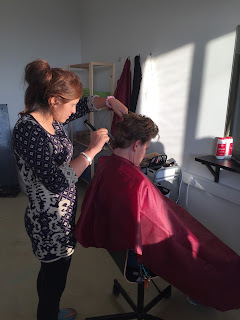 There is a simple kitchen now, so women can prepare meals inside rather than on cement outdoors. There are sinks for washing food and dishes. 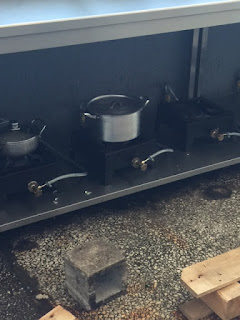 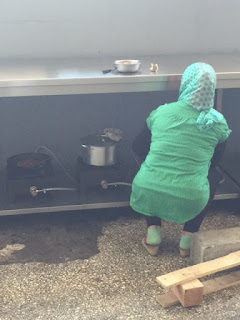 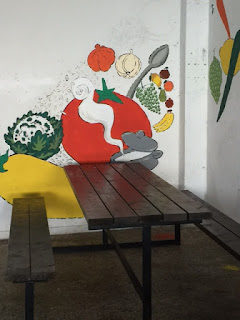 Washing machines have arrived and are being prepared for use.

There is a small library, with books in Farsi and in English, for children and for adults. I brought a Richard Scarry picture book and a copy of Goodnight Moon. I hope I’ll have a chance to sit with a child and read one of those books before I leave. 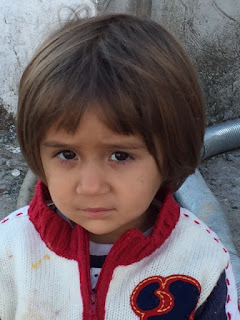 I hear more English being spoken. The children are picking up the language quickly and they practice their new skills with the volunteers. English classes are offered and more of the women speak at least a few words.

The men who play volleyball had a competition with those of another Afghan camp nearby. They played at Malakasa on Monday and the home game was on Friday night. Numerous residents and volunteers attended to root for the home team. We lost both games, but some fine volleyball was played. 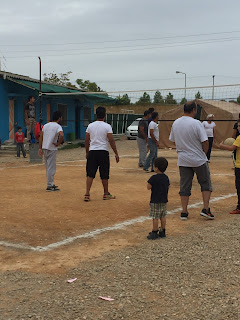 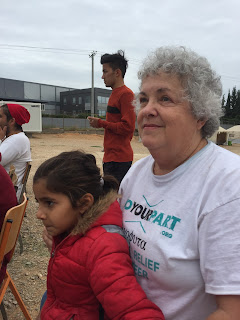 Yesterday it poured down rain and everyone got wet. The building roof isn’t completed yet so many rooms leaked. Water dripped into tents. Even the volunteer office. 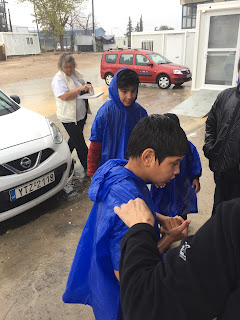 Today it is raining - no, pouring. The families living in tents are working feverishly to direct the rain away from their tents. The temperature is 51 F and bone chilling. These families need to move inside and even though I have had an architect draw up plans, no large government organization has funding available so they have asked Do Your Part to do it. Does anyone have a spare €120,000 laying around they would like to donate? Sigh................ www.DoYourPart.org  or, on Facebook, search Oinofyta.

Do Your Part is a small nonprofit. Every dollar donated goes directly to where it’s needed. No middleperson. No administrative fees. My friends Vicki and Monte sent a check last week. The money was deposited in the bank in Virginia and, the next day, it was taken out via ATM in Oinofyta, Greece. Part of the money was used to buy medication for children suffering with chicken pox at the camp. Just as I’m working “on the ground” as a volunteer, any donations go the same way. I love the directness of this giving.

The volunteers this week were from Spain, Germany, and the US. We range in age from 18 to 68. We form a quick community, an international group engaged in a common cause.

You and Jann are on my mind every day and I look forward to your posts. It sounds like all is going as well as it could, given the rain and the onset of cold weather. Thank you for taking the time from your duties to write this, Linda. I'll go check out that website now.

This is a close look most people will never get. Appalling as it seems to us, it is also orderly, though basic and barely sustainable. It might be useful for the world at large to get a lot more of these snapshots, to move us into action. Thank you, Linda and Jan.

It's a great thing you're doing. I'd like to hear someone read "Goodnight Moon" in Farsi.

I am so impressed with what you and others are doing and how great the need is. Thanks, I will check out that site.

Thank you for setting such a wonderful example of love in action.

Make sure you're taking care of yourself as you work so hard to take care of the people in the camp. You, as always, are such an inspiration.

This certainly sounds like a worthwhile group. So important for individuals to have the tools to help themselves and one another I think -- just as each of us would prefer if we were in such circumstances. Your account greatly appreciated.