The play's the thing

My Arizona winter has been different from what I expected, because of The Play.

For the last two winters, my husband Art has been in the cast of a musical at the Voyager RV Resort, where we live from November to April. "Guys and Dolls" was his first foray into the magical world of theatre. He played a gambler, and he was hooked. Last year he was cast in a lead role in "Oklahoma!" During both seasons, his theatre participation came first in our planning. I was entirely supportive; at age 72 Art had found a new passion.

I stayed out of "Guys and Dolls", busy with my own activities. For "Oklahoma!" I was responsible for ticket sales. Fourteen volunteers sold 900 tickets at a makeshift box office open three days a week from January to March.

This year's musical was to be "Anything Goes," and Art was cast last spring in a minor role. He worked on his lines and the music for three months. Then, on September 1, the director and producer sent an email saying the musical was being cancelled. "It would have been easier if we had known last spring what we know today, but we didn't."


I was the one who read the email to Art. I was so not okay with his disappointment, and, undoubtedly, with that of the other 19 cast members, that I called Deanna, the producer, and asked what had happened. After a couple of conversations, she decided to give theatre at the Voyager another shot.

In early November Deanna and I - wearing my mediator hat - had a meeting with the former "Anything Goes" cast to see what, if anything, could be done. We realized there were too many missing pieces to do the musical. Instead, the group decided to present four one-act plays, which would provide all "Anything Goes" people with a theatre opportunity for this year. It wasn't a musical, but it was an on-stage experience. We would call ourselves the Voyager Theatre Company.

So, for this year, I was the "associate producer." As producer, Deanna carried the vision and the strategy and the responsibility. She also directed two of the four one-act plays. I was responsible for supporting Deanna in whatever she needed done: liaison with the Activities Office for scheduling rooms and display flyers and access to the light and sound booth; editing various flyers and the playbill; writing the checks and maintaining the books. And for listening to whoever needed to be heard. And, for "An Evening of One-Act Plays" which happens this Thursday and Friday, I'll be backstage - making sure everyone's mics are turned on and off at the correct times, cueing the actors of the four plays, and communicating by walkie-talkie with the production booth. All of these assignments are new to me; nearly 50 years ago I performed in four musicals and a play, and directed one high school play. I am a self-proclaimed lifelong learner, but the backstage stuff later this week freaks me out a little. I will have to be okay with whatever mistakes I make.

We don't know yet what will be happening next season. It will depend on what kind of interest there is among Voyager residents. We will know that next Monday. I know I will not be involved next year. This is Art's thing, after all.

I am looking forward to the closing curtain on Friday night, when I get my life back. I remember feeling exactly this same way 50 years ago.

But, for now, The Play's the Thing. 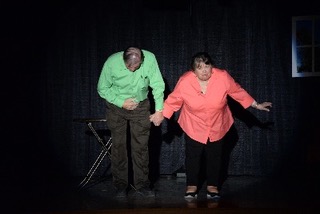 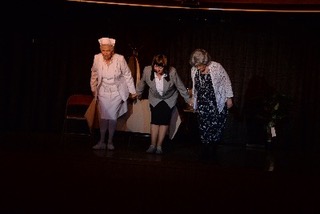 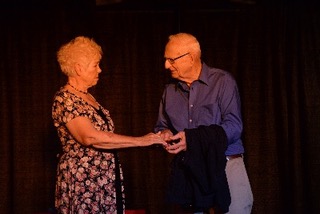 One Act #3: One Question 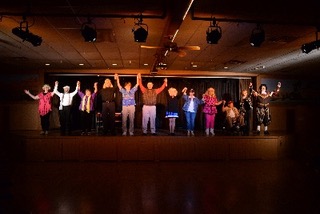 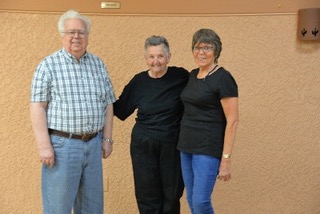 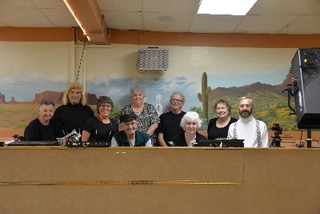 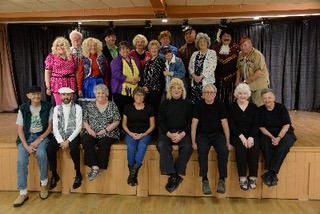 The Voyager Theatre Company
Posted by Linda Myers at 4:16 PM

Hope it is successful enough that the show will still go on.

Break a leg! IT's not easy being awesome.

Good for you! I think that mediation got you a little more than you bargained for, but you made a lot of people happy.

It sounds like it will be another adventure, for sure! Another talent to tuck under your many feathered cap, Linda. :-)

You really don't appreciate the work that goes into these productions until you are involved. Hope you all have fun and that it is over soon.

That's one thing I missed once I wed in my late twenties, was no longer having the time and opportunity to participate in little theatre -- just plays, cause I'm not a singer. Glad your husband can enjoy it. Good of you to support him and this production successful. Haven't given consideration to becoming involved at my age now -- maybe in my next life.