We've been at the Oinofyta refugee camp for nine days now. The camp coordinator, Lisa, left on Wednesday morning for a much needed two-week break. She is with her family in Virginia. I am taking her place as camp coordinator. I am four days in with thirteen to go. My husband Art is the shopper for camp and volunteer house, and the breakfast and lunch fixer for the volunteers. And the errand runner.

I've had some moments of despair and some of delight. The despair comes when I'm overloaded with issues I don't know how to resolve. Not the big issues, like:

These big issues I can live with, because I know I am powerless. I am decent at letting go of that kind of thing.

It's the little issues - some of them cultural, some not:
The moments of delight? Examples:

I think I've said before that the Greece refugee issue is no longer much in the news. Some NGOs are cutting back on their resources here - or leaving the camp entirely. They may go to new camps - in Iraq, for example - where conditions are far more dire. Our Oinofyta residents are housed and fed and they have activities available to them. Some of them have jobs. But they are all here because they can't go anywhere else. All the borders to the north in Europe are closed to them. That was where they wanted to go. Now they are in Greece. They may stay here and become integrated into the culture. They may decide to go back to their homelands - Afghanistan or Pakistan or Iran. They may try to cross the border illegally. A few may successfully be reunified with family members in Europe.

In the meantime, they are here.

Even when I feel like what I most want to do is go home - which happens from time to time during stressful days - I know this is where I am supposed to be. Not in Brier, Washington, where the temperature is less than 101 and everyone speaks the same language as me and I have my own bathroom and laundry facilities and a cat that ignores me most of the time. Instead, here in Oinofyta, where I hear Farsi and Urdu and Greek and Spanish and I share a bathroom and a washing machine with others. I am surrounded by inspiring young volunteers and strong, tough residents, and little children, and boys who kick the ball onto the roof so they can climb onto it.

We are here, doing what we can. Doing our part. 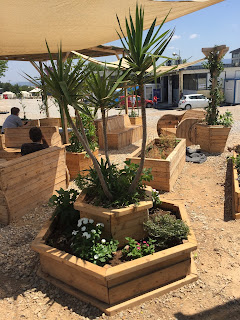 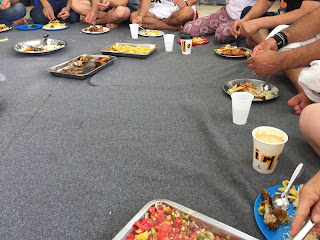 Lunch - residents and volunteers
Posted by Linda Myers at 3:25 AM

You are doing good work, Linda, and I'm so glad you are writing about your experiences here. It's different from anything I could ever imagine doing myself, and I'm in awe of your dedication. I hope that you and Art survive the weeks ahead with no major problems. Thank you for sharing these moments with me. Hard as it is, the world is a better place because of you and people like you.

Good job god bless you your so sweet thanks for everything you do for us we are really appreciated even we are not good people .....

I can't say it any better than DJan just did.
Linda, you are a wonder to me. Your courage, your determination, your skills in dealing with people and problems are awe inspiring.
I appreciate your sharing what life is like there at that one refugee camp. That camp, for better or worse, is multiplied many times over around the world. I can't begin to deal with that. You are one person I know who is dealing and making it better for some.
Thank you.

Thanks for the tip on how to find the good. Today I thought how traveling is way better than re-locating. But I changed "better" to "different". I wanted to make a change. I did that. Learn, learn, learn.
I'm less than two weeks in myself. The program (school) hasnt even begun yet so I reserve judgment on the situation. May as well make the best of it. I have nowhere left to go and I'd be broke haha.
Today, like you, I simmered the situation down to basics: I have a shower, a bed, a private place to write, to think, to get away. I have now TWO bicycles (I'm rich in bikes).
It seems with the phone issues you and I are experiencing that adapt/adjust/give-it-time are the key to mental survival.
Also, some people have no phones.
thanks for the updates.
{hug}
Cynthia

You have immersed yourself in the camp and its people, its issues, its place in the larger world. You know you can't solve all the problems and yet you have returned several times, opening yourself to the sorrows as well as the joys. That is a huge contribution and you are a very special person for making it.

...and you will have the best "what I did on my summer vacation" story of any of your friends! I'm not even going to try and top you. Hugs to you and Art. You are both awesome.

It is hard to imagine the frustrating days you put in and continue to when most would just quit. There is so much need and thank God there are those like you willing to put in the often thankless effort. Stay safe and keep doing what you can with what you have. You are so needed.

Your efforts there do make a positive difference in others lives -- what most of us want to achieve. Your situation doing so is more challenging than what many of us face but matters greatly.

Dear Linda, thank you for what you are doing--not only for the refugees and the volunteers but for all of us who read your blog and learn from you just how grateful we need to be for our lives and how we need to keep others informed of what is still happening. Once the tv news and the papers stop covering something, it seems to disappear from my consciousness. Thank you for making me aware. Peace.