My May 30 post was called "Drenched in Privilege." I wrote it after a day in Olympia, the state capital, serving as a "peace keeper" for protesters in the Poor People's Campaign. My first-ever protest participation.

Usually I get about 300 "hits" on my blog posts, and most of them happen in the first four or five days. The May 30 post has gotten 913 as of today. Astonishing!

I think what's happened is that people are sharing the post from Facebook, because my blog posts go there too. I'm guessing that my thoughts on privilege - something I apparently have but didn't realize it until a couple of years ago - are waking up other people like me. I hope it's not because the rest of the world is laughing at how clueless I have been.

I've seen the word "woke" more often in the last few weeks than before, and I think it means we're becoming awakened or aware of situations around us that we never thought much about before. And I think that's where change will happen.

I've got some other changes going on right now:


I like to think I'm open to change. I guess what's really the case is I'm open to SOME change. Especially the kind of change I choose myself.  The change I don't choose is a little harder.

I wonder how many of the 913 are having similar thoughts.

Here's another change. How did it ever happen that I got old enough to have two grandchildren graduating from high school? 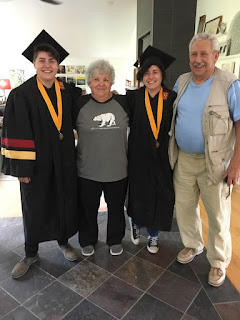 There is an interesting editorial by David Brooks, titled "The Problem With Wokeness" that will give you even more to think about. https://www.nytimes.com/2018/06/07/opinion/wokeness-racism-progressivism-social-justice.html

Sounds something great!
All the best for completing your work!
You doesn't seem to be old along with your grandchildren's!

You struck a cord and made people think which is a very good thing.

I found your post very enlightening and thoughtful. It made me take stock of my own privilege and how I might help others in my own way. That's a great picture of you and your grandchildren. I saw in on Facebook and smiled, just like I'm doing now. :-)

While you have grandkids gtaduating I just got my second grandbaby last week. I lnow I was born after a nast war but was lucky to have lived in a time and place where there was peace and work and a way to become privileged. Aging is now a factor. Good luck with the downsizing project.

Oh dear, downsizing — working very slowly at doing some of that myself. Maybe you’ll make faster progress than I am.

Good luck with the downsizing and selling. We sold our house in West Seattle in 2006, moved to North Carolina, hated it, and ended up living full time in a series of RVs for 10 years. We recently bought a house in Tucson, but we're in Issaquah for the summer, still in the RV. Anyhoo, the downsizing can be painful. We had to keep reminding ourselves that tossing the stuff is not tossing the memory or the love attached to the item. I really enjoyed your post on privilege and how you are managing your weight. Good on you!

Your house is valueble for me. Thanks!… slots for real money