I'm a frequent traveler, but so far this summer I've been mostly staying at home, preparing to rightsize and then maybe sell our Washington house. It's kept me busy since we got home in April. Now I think I'm ready to move forward on other fronts.

I serve on the board of directors of Do Your Part, an American nonprofit currently working in Greece with refugees. For a year and a half DYP managed the camp at Oinofyta. Then, in November of last year, the government shut down the camp. The volunteer groups serving the camp had less than a week to remove all the supplies and dismantle all the amenities that had helped residents of the camp become a community in spite of their tragic and frustrating circumstances.

During the winter DYP rented a building in the nearby village of Dilesi to create a Community Center for refugees and to accommodate Oinofyta Wares, the tailor shop created at the camp. More than half a dozen tailors set up shop to make bags of various sizes from canvas tents the residents had lived in during the camp's first months, and from donated clothing, and from dismantled cots.

In March 2018 the government reopened the Oinofyta camp. Because it was to be "temporary", few services were provided. Do Your Part did not return to work in the camp, but talked to residents to assess their needs. Since then, the Community Center in Dilesi has become a support and respite site. MobileDoc comes once a week to take care of medical needs; lawyers volunteer every other week to help residents with asylum issues; some children are taking classes; women can spend a few hours in a friendly place. DYP also distributes donated food and hygiene supplies. 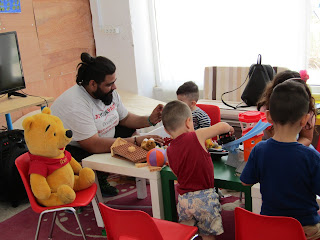 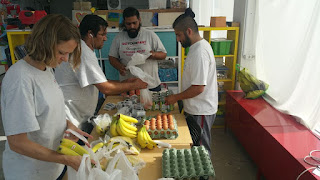 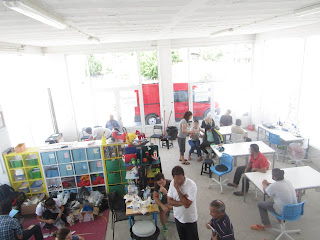 I have not seen the Community Center, which was created since I was in Greece last August. So Lisa, DYP's executive director and the driving force behind the project in Greece, asked me to come for two weeks in August, to see how it operates and to manage it for a week after she returns to the US.

I knew the chances were good that I'd be going back, but I didn't know when, or for how long, until last week. August 21 to September 15. So I've bought my tickets and will fly through Frankfurt on Lufthansa Airlines - a new one for me.

And the second set of tickets?

On my trip to the Northern Lights, I met a woman who lives about half an hour from my Tucson home. When we got home, she and I met for lunch several times. Her husband is a bit older than she is, and doesn't want to travel as much as she does these days. And my husband is a bit older than I am, and doesn't want to travel as much as I still do. So my new friend and I decided to take a trip together to see how we do as travel companions. After some discussion, we decided on three requirements: (1) Our destination should be a place neither of us has ever been. That ruled out the Baltic countries (she has been there) and Iceland (I was there in 2005). (2) It can't be hot, especially if it's humid. (3) It has to be a place where neither of our husbands want to go, since we'd go with them.

We arrived at three first-travel possibilities: Toronto (a weeklong Road Scholar trip to experience the religions of the world); Morocco; and Patagonia. We settled on Toronto, not because of the destination but because of our curiosity about the topic and the slightly shorter trip duration.

Both of us are organized planners, so we kind of delegated who would do what. My friend watched airfares and found a good one just yesterday. She used her credit card for both of us and I will write her a check.

As the song says, soon you will be "on the road again" or in this case, "in the air again." How nice to have a travel companion to Toronto.

Greece, Toronto - always on the go. Enjoy the Road Scholar program. We have never been disappointed.

They both sound intriguing! Is the Toronto one coming up soon or after you return from Greece? I am not at all surprised that you are traveling again. And to have a new traveling companion sounds perfect. I look forward to hearing all about it. :-)

The world calls and you follow. I admire you so much.

So glad you have found a travel companion and that she has found you. You can help eachother battle the wanderlust.
Can't wait to hear how both trips go.

I just read a book, "The Girl from Aleppo" by Nujeen Mustafa, which chronicles a young girl's journey from Syria to Germany in 2015. It gave me a new appreciation of the work you're doing in Greece. All I can say is, good for you, and god speed.

Your approach to new challenges is such an inspiration to so many. I, for one, find your work in Greece to be such a blessing, for the children as well as you. Adding a new solo traveling companion is an excellent idea. Too often solo travelers either don't take a trip or worry about traveling alone. And, I think you will like Toronto and the countryside around it.

How fortunate that you met someone with whom you may be able to enjoy traveling. I had hoped to do the same after my husband died but never did. Your trip to Greece in August sounds like another worthwhile venture that will benefit others, too.

Hi Linda! Thank you for explaining the organization you are working with in Greece. I know you've posted about it before but this explains it much better. and GOOD FOR YOU for reaching out and finding a friend who wants to travel. I think your plan is EXCELLENT for picking the three areas of interest for you both. I'm sure when you do the trip it will make for another very interesting blog post. ~Kathy

I think you are very lucky to find someone to travel with and I hope you find you are great travel companions. My daughter is in Greece right now and I'd live to go there someday. I think planning and making arrangements is half the fun. Your trip isn't far off.