Greece: Getting there, Settling in

For me, the journey begins when we pull out of the driveway. On Tuesday, August 21, the drive to Sea-tac was unexpectedly smooth. In my daypack I carried my laptop, a portable prenatal ultrasound machine purchased with money from Go Fund Me donations, my passport and travel belt, three pairs of glasses and my meds; in my carry-on, my clothes for the two-week trip; in Checked Bag #1 (free on Lufthansa), the rest of the durable medical equipment that had been donated, plus a few gifts for Do Your Part team member. In Hopefully To Be Checked Bag #2, disposable medical supplies, also donated, and a remote-controlled car for the children of the Do Your Part community center. If I couldn't persuade the ticket agent to allow both checked bags for free, my husband would take the second bag home.

I told the ticket agent I was an aid worker at a refugee camp in Greece and both my checked bags contained medical equipment and supplies (80 percent true), but that I couldn't pay $100 for the second checked bag. He said he wouldn't charge me for the second bag! I kissed my husband Art goodbye. He left for the parking lot and I for the S gates.

International Departures gate S15 felt like I was already gone. I waited in line with several hundred travelers, most of whom were probably returning to their own countries, because I heard very few people speaking English. Or French or Spanish, the only other languages I recognize.

After a nine-hour flight to Frankfurt, I got my exercise for the day in a dash from my international flight (left Seattle an hour late due to smoky skies from fires in British Columbia and Eastern Washington), onto a bus which moved WAY too slowly to Terminal A, through passport control which moved WAY too slowly even though the line was short, down a LONG corridor (went under the runway, probably), through the duty-free section in Terminal B. Boarded my second flight right after I wiped off my sweaty face with my shirt! Talk about sophisticated traveling! However, I was relieved to note that I was not winded. No smoky skies today in Germany to aggravate my asthma.

On my flight from Frankfurt to Athens, I took too many bags on board: my CPAP, my carry-on, and my daypack. I didn't know I'd broken the rule for Lufthansa flights within Europe, since I'd been in compliance for the international segment. As the flight attendant told me about the rule, I listened with respect, explained what had happened and said I'd remember next time. Then she put my carryon in an overhead bin in business class because, she said, I had listened and heard her instead of complaining. I told her about this trip and, a few minutes later, she brought me a bag full of toys the airline keeps for kids! Wiebke is now my Facebook friend.

I arrived in Athens on schedule, but because of the short time in Frankfurt between flights, my checked bags were still in Germany. I almost expected it. I left my contact information with the Lost Baggage Specialists and met up with Lisa and Samim of Do Your Part, waiting for me just outside.

We made a brief stop at the Community Center for me to meet the other volunteers and take a quick tour of the facility, as well as change the time on my laptop and connect it to the internet. 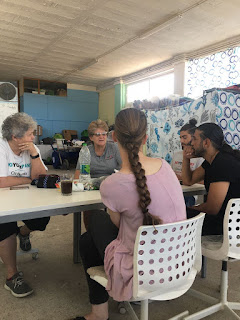 I was taken to the team house in Dilesi. I made a supreme effort to stay awake as long as possible but it was 8:45 p.m. (10:45 a.m. in Seattle) when I lay down in my bed. I heard a loud crack. Got up to turn out the light and lay down in bed. The frame broke completely and I accompanied the mattress six inches to the tile floor. I thought, "Well, I'm not THAT heavy!" I had slept in this same bed last summer just fine. I was tired enough that it didn't matter.

Well that was a lousy welcome to be dumped on the floor:)
I was so impressed how a little listening and civility on your behalf with the flight attendant ended in surprise gifts and a new friend. Life could be so simple if people would just not bristle up at the slightest inconvenience and adjust. Well done.

I have been following you on Facebook, so I know this stuff already, but I just want to say how impressed I am with you and your talents for getting along and making do and taking on difficult tasks with such courage and aplomb.

Love this summary! Keep making notes for us to learn of your efforts and experiences! We learn through you! Stay safe!

I am looking forward to hearing more about all your adventures in Greece this time! You are such a good writer and it felt like I was there running alongside you for the plane. :-)