Happy birthday to me

A couple of years ago I thought about getting a tattoo. I was serving at a refugee camp full of Afghans, and I thought a good way to honor them and the experience would be to get a kite tattoo. I looked around a little online, but I didn't find exactly the right thing. And I wasn't sure where I wanted the tattoo. Actually, I wanted it on my foot, but I'd been told that's a painful place. I asked my hairdresser in Tucson and friends here in Washington where I should get my tattoo. They all had their favorite artists. I pondered, but didn't take action.

Then, in July, my sister Alyx decided to get her first tattoo. She has chickens at her place, and she wanted to incorporate her love for them in a tattoo. She set up an appointment at Slave to the Needle, a reputable place in Seattle. I decided to go with her to see what it was like.

It was interesting! The tattoo artist, Lance, took Alyx's initial design and put it on his iPad. He made a few small modifications. When she approved, he made a stencil of the design. During her session, he applied the stencil to her upper arm. Then he traced the stencil with the ink needles. 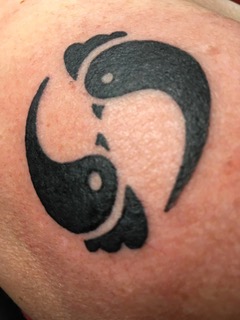 A few days later, Alyx sent me a sample of a tattoo that was a world map. She said when she saw it, she said, "This is Linda's heart." I've taken 65 trips since I quit work eight years ago, so she was pretty right. We looked at a few designs together, and I made an appointment with Lance for September 11.

I'd hoped Alyx could come with me for my session, but she had to work. So I asked my friend and former business partner, Lillian, if she would come, and she said yes.

As before, Lance sat with me to apply the finishing touches to the design I'd chosen. Instead of an airplane, I wanted a heart in the sky, since I travel for love.

Here are the pictures Lillian took of my session: 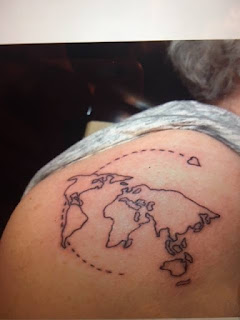 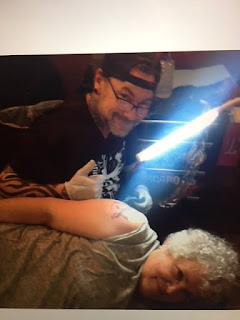 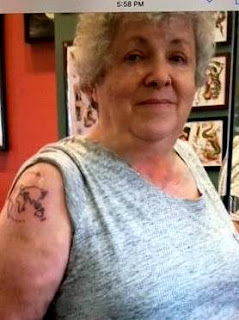 It's been nine days since I got my tattoo. People ask if I am going to get any more, and I say no. They ask if I'm going to do anything more to this one. I think I might have the heart/plane colored red, but that's it.

Today I am 70 years old. I am glad I got the tattoo as a birthday gift to myself.

Also for my birthday, I sent a check for a friend so she could travel from Greece to Italy. She will be the support for another friend who is giving a TEDx talk in Italy on October 6. I'm grateful for both of the friends and for the fact that I can afford to buy the ticket.

My day was just perfect. I got about 60 birthday wishes from Facebook friends. I met my friend/niece Colleen at Starbucks in Kenmore for a three-hour catchup conversation. Then I met my friend Vicki at Starbucks in Mountlake Terrace for another long talk. I don't often go to Starbucks except to meet up with friends. Then I had a great phone conversation with my friend Joan in Arizona. When I got home at 5 p.m. my husband Art was fixing dinner. And after dinner, for the first time in absolutely ages, I had a bowl of vanilla Haagen-Dazs ice cream with chocolate fudge syrup on top.

Colleen asked me what my goal in life is now. I said, "To use the gifts that have been given to me as well as I can, for as long as I am able."

It's odd. I've been almost dreading this birthday for six months. It's a pretty big number. But when I woke up this morning, my first thought was, "I have arrived."

How cool is that?
Posted by Linda Myers at 8:39 PM

Happy Birthday!! What a great way to celebrate, you are brave and you keep growing and learning, so inspiring! Great tatoo too

You are an inspiration for all who are dreading that big number. Age does not mean you have to give up on being your best self. Happy birthday and here's to many more trips!

What a great 70th birthday! I love your tattoo, and Alyx's, too. Thanks for sharing your perfect day. :-)

Happy Birthday!
The tattoo is perfect for you!

Those birthdays divided by 5 and 10 are often looked upon with dread (after the age of 30). However, once we reach them, the fear goes away as we realize nothing has changed and we are grateful of making another milestone. Celebrating and spending time with friends is just perfect. The tattoo is perfect also.

You are a far braver soul than I! Good for you and Happy Birthday wishes.

Happy Birthday Linda! I personally believe that big birthdays deserve much more than a day--more like a week, a month or a year! So glad you got to spend it in a way that did your heart good -- isn't that what really matters. And your tattoo is a perfect expression of who you are. Keep celebrating all the gifts that you have been given. ~Kathy

Happy Birthday and so glad you had such a nice day. Love your tattoo and it is perfect for you. Oh to be 70 again.

What a great tattoo! Congratulations on it and your milestone birthday.

Your birthday looks like you, at least as much giving as receiving. So glad you were able to CELEBRATE 70.

Happy Birthday! The tattoo is incredible and your sister nailed it when she said it was you. Wishing you many more years of happiness and the joy that comes from doing what you do.

What a great story! I love your attitude. With my 70th birthday coming up next year, I don't think the tattoo will be part of it, but your zest for life and giving back are inspiring.

Belated happy birthday. The seventies are great years. Enjoy!
I think you are brave to get a tattoo. Of course we knew that from all the things you do.
Gene

What an interesting thing to do for your 70th. I don't think I will ever have a tattoo (but never say never, right?!) but I like the one you chose. I like the meaning it has to you and it's simple lines. I think jewelry has the same purpose for me, something I can wear that reminds me of something important to me. Have a wonderful 70th year!