I never thought of myself as a storyteller. I haven't got a lot of creative imagination, so when people would tell me I should write a book, I'd respond that I didn't have much to say.

But other people do. I've found that I can listen to their stories and write them down. The stories aren't mine, but I'm the keeper of their words.

Here's a story I heard in Greece from one of the residents of the Oinofyta camp. I met Abdul on my first trip to Greece, and he told me his story on my second trip.

I have seen Abdul on all the five trips I've made to Greece in the last two years. He now works at the Oinofyta Community center, lives in Athens, and has a second daughter. His circumstances have changed a bit, but every time I see him I remember the story of why he left his homeland.

Every refugee has a story.

This winter my husband Art and I are volunteering at a refugee shelter at a church in Tucson. Our shift is Saturday evenings from 5 to 9. We've cooked dinner, served a meal, offered coffee, done laundry, played with children, and transported refugees to the Greyhound bus station. Whatever is needed. Each week the sheltered guests are different. They're from Mexico, Honduras, Guatemala, Brazil and Peru. They've made their way to the US border and asked for asylum. They've had an initial interview by the Border Patrol or ICE and have been declared eligible to apply for asylum. Many of them left their homelands because of threats from drug gangs. Few of the people at the shelter speak English, but many of them are literate. At the shelter they are given an opportunity to write in a journal about the journey from their home, across the border and into Tucson. The stories are all in Spanish. I hope they will be translated eventually. I suspect some of the stories are quite a bit like Abdul's. 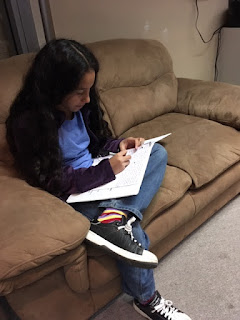 Last Thursday night I went with some friends to an event called Odyssey Storytelling, in downtown Tucson. Six people told a ten-minute story on the theme of "Mortified." The stories were hilarious and poignant and, because the audience was close to the speakers on the stage, we were kind of all together, sharing the experience with the storytellers. It was an intimate experience. Here's what the storytelling experience is about:


In an article in Borderlore, a publication of the Southwest Folklife Alliance, Odyssey Storytelling is described this way: “The big picture is that sharing stories is about building community. On a personal level it is about being honest and being seen for who you are. Both of these things are basic human needs. Everyone benefits from a storytelling event either as a teller or as a listener. Odyssey Storytelling offers a showcase for people of all ages, cultures, gender expressions and sexual orientations.”

All of us have a story.

At the Voyager RV Resort, where Art and I live in the winter, storytelling will make its debut in January. Six storytellers will present a ten-minute story. It will be a true story, and it will be about them. I've been asked to be one of the storytellers.

My story will probably be about the case of the beeping pacemaker.
Posted by Linda Myers at 3:18 PM

You are quite good at story telling.

I hope that someone compiles these stories of the refugees at our border. It may open up the eyes and hearts of many who only listen to the the propaganda about these desperate people.

I think you are an extraordinary storyteller, Linda. I still remember some you shared when we were going to Vashon every October. And I never miss a blog post! :-)

I agree with Starting Over. You or someone needs to record these stories. It would be a best seller and you could do it.

I think it is so wonderful you are volunteering to make the refugees more welcome during the present unfriendliness toward them in this country. I used to be involved in the Minneapolis area, teaching English as a Second Language and volunteering in many other ways but have moved to a small town in the South where there are no opportunities. I miss it so much! Again, I thank you for what you do.