The Bag Lady buys an e-bike

How much bike riding I'm doing depends on where I live. In Washington, where we live in the summer, our neighborhood is hilly. We'd have to put our bikes in the back of our truck and drive three miles to get on a trail with gradual enough hills to enjoy ourselves. In Arizona it's pretty flat, so we ride our bikes a lot - both inside the Voyager RV resort where we have our little place, and on the 55-mile loop around Tucson.

Last year I joined a Voyager group called Easy Riders and biked with them on the Tucson loop once a week nearly all winter. My maximum distance was about 18 miles. I noticed my fitness improving and always felt great at the end of the ride. But again, I didn't ride a single time all summer in Washington.

Then my friend Ellen and I decided it might be fun to plan a bike and barge trip in Europe. We wanted our choice to be easy rides, a small vessel, and of two weeks' duration. I asked my husband Art if he wanted to go, and - to my great surprise - he said yes. Here's what we'll be doing next May:

We decided to rent e-bikes for the trip. They cost extra, but with distances of 30 miles a day or so, we didn't want to arrive at the barge each evening exhausted and gasping for breath. We decided we should get some e-bike practice before the trip, though.

Ellen and I rented a couple of Pedego e-bikes in Tucson last May on a ride-two-hours-for-the-price-of-one deal. We felt clumsy and intimidated for about the first two minutes, and then it was exhilarating and wonderful. We rode nearly 30 miles in two hours with not much effort, though we were tired when we dismounted at the end of the ride. Take a look at the Pedego bike.

They are fun to ride but pricey, so we decided to look around at other brands. Rad City bikes were a better price for us. Art and I looked at them in Seattle, where they're made, and suggested that Ellen try one out in Arizona.

She made the two-hour drive to Scottsdale, rode a Rad City bike, but decided on another brand in the store instead. It's an Espin.

Ellen rode her Espin for a month and raved about it in every email. So two days after I arrived in Aizona, we drove with her to Scottsdale and rode an Espin. We bought two of them that day.

On our first day on the Tucson loop, Ellen and I rode 18 miles with ease.

After my first day on the loop, I gave my old bicycle to my friend Shirley. I was that sure the Espin was for me. I am still sure!

Here is my bike, last week on the trail, with Ellen and her ride. 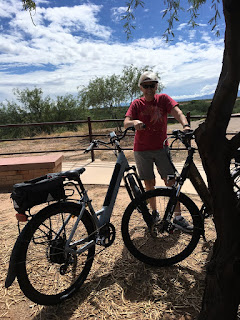 When we drive back to Seattle, our bikes will go with us. They will be fabulous in our hilly neighborhood.

Here's what I know about e-bikes:

Happy Birthday ... yesterday. What a great birthday present to yourself!

That's great! I am so glad for you and am tempted to try an e-bike myself. But it might be awhile before I work up my nerve. :-)

I've got to keep this a secret from my wife B. She would turn green with envy since she wants an e-bike so bad. One thing that's stopping her is that we don't have good bike paths in town, which means she'd have to load it onto the car and drive it someplace ... along the river maybe. But she thinks the bike is too heavy for her to lift it onto the car; plus, there is the expense. Would she really use it that much? We do not have bikes (see comment above about our town bike paths) but always rent them when we go to Cape Cod or the South Carolina beach.

Belated Happy Birthday. I have thought about one of these bikes and am delighted that someone I trust gave such a great review. The biggest thing I miss about Florida is the level biking. Thanks for the review.

I gave up bike riding a long time ago because of balance issues. I am envious of your new found fun.

Hi Linda! And happy birthday! How great that you were able to get something that is both fun AND healthy. I've had my eye on an electric bike for a while myself, but Thom (my husband is afraid to let me test drive one because he KNOWS I will love it. Isn't it awesome that such a product is available. And how cool to hear about the bike paths around Tucson. If we ever get down there we will bring our bikes and check it out. ~Kathy

Hi Linda, I'm a new follower. The bikes sound terrific. I don't think my balance is good enough anymore but if I had a good place to ride I would be sure to give it a try. I look forward to reading more.