My husband Art had an opportunity to fly home to Seattle on Thanksgiving to assist an "older couple" who needed some help with the airports. We agreed that was a good idea, since he had a small project at home to attend to, and I was fine to spend the time here in Tucson.

Here's what I did while he was gone: 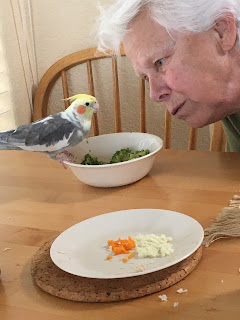 And here's what I learned in my five days solo:

isn't it wonderful that there are always new things to learn -- love your wisdom.

I love it when B goes away for a couple of days and I can do all the things ... well, pretty much all the things you were doing. I don't like it, though, for more than a couple of days. Gets lonely. Btw, how's "Man in the High Castle"? I was thinking of watching; but it seems like a big commitment since there are a lot of episodes. And be careful on that bike!

How wonderful! It sounds like it was all good, for everyone involved. I watched the last season of MITHC and enjoyed it, but the ending was rather... (well, I'll leave it at that). :-)

After reading your list I realize I have more control in my home than you must have. While we share the remote, I usually run . While we share TV watching, I usually get to choose. While I talk, Tom pretends to listen so I might have to repeat myself. I cook and decide what to cook.
I enjoyed your post though. It's always fun to read your lists.

Very admirable. You spent the time with friends and alone, eating out and scrounging at home, and just generally doing what you wanted while at home. I call that a win-win.

So are you going to learn how to do a pull up? I've been trying for years now so I need the secret!

Every year my husband likes to go away to somewhere really COLD..and I hate the cold! So off I send him. 7-10 days. Usually I plan a girl’s trip or a solo trip for myself, but this year I decided to stay home.We had a challenging year with some family illness, our cat of only 7years old died suddenly, and I did not feel like the hassle of travel— (plus we had. BIG TRIP to Thailand coming up in November) — I felt I could use a break. And to be a whole lot of NOT BUSY, just on my own.How blissful! I watched the shows I wanted when i wanted, I played a lot of music,slept in, did a lot of art,went to some art museums, had lunch with friends and my son, and did some extra meditation and yoga right at home. .I felt I had a mini retreat.Ahhh..so good that next September when he goes away i will repeat!!

Man in The High Castle is based on a tremendously inventive and terrifying premise. It is very well acted and worth your time. Just try not to see too much of today's world in it; you will never get to sleep.