I'm an optimist by nature. There's a metallic "grateful" piece hanging on one wall of our small place in Tucson. To me, "gratitude" is a more distanced word than "grateful". I like the immediacy of "grateful". It's happening in the present, not in some vague, general place. 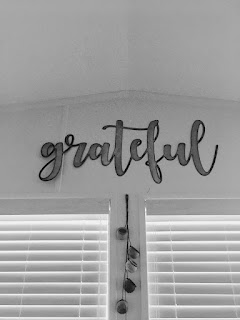 I've got lots to be grateful for from just this summer:

In late June and early July we flew to Barcelona to board the Aegean Odyssey, a small ship leased by Road Scholar, for a 14-day cruise. We saw three new countries: Spain, Morocco, and Portugal.

We caught covid, we think, during the four hours we spent at Heathrow airport in London. The symptoms showed up three days after we got home. We got prescriptions for paxlovid. We felt like we had very sneezy, runny-nose colds for a few days. Then we got well. Very glad it was this summer, with omicron, rather than two years ago, with maybe a ventilator.

On our way home from the Seattle airport, I left my passport in the Uber driver's car. The driver lost the passport, so I got a new one. It arrived in three and a half weeks - quite a bit sooner than the five to seven weeks the Expedited option had indicated would be the required wait time.

I walked once a week with my friend Gail, three or four or five times around a park in her neighborhood. Usually I used my trekking poles, old friends for hiking through the years, and now to take some stress off my cranky knee. Those times with Gail have been a gift.

My son James is our upstairs tenant. He comes down most afternoons to tell me about his day. His remodeling business is thriving. He's also very good about doing the handyman things for us. He's always accompanied by his Aussie, Augie, who eats the cat food nearly every time he comes into our apartment. Augie waits until none of us are watching, then enjoys his snack if we've forgotten to put the cat food bowl on the sink. I love the dog - someone else's dog is the very best kind.

I bought a new e-bike. It's smaller than my three-year-old one, so I can get on without having to stand on the curb. I've only ridden it once since I got it last month, because it's very hilly in our Brier neighborhood and I'm a little scared of it. I'll do a lot of practicing in Tucson this winter, where it's flat.

We hung up three bird feeders and one for the hummingbirds. They're right outside my sliding glass door and I can see them from my recliner. We also have a terra cotta birdbath on the deck railing, and a little fountain on the deck. The birds love it. So do the squirrels! So far we haven't found a way to keep them from getting at the feeders - they jump down from the overhanging branches or shimmy up the poles.

We replaced the many buttercups in the side yard with a garden area and wood chips so the place won't look so wild. Earlier in the summer we ate our fill of strawberries and raspberries. A convention of birds ate every blueberry on our three bushes in one day. We know we share our property with the critters. Some of the grapes are ripening up, but we had so much rain early in the summer that the crop won't be as plentiful.

Today is my birthday. My friend Gail organized a lunch at a beach restaurant and the five of us enjoyed a two-hour visit. For dessert we ordered two peach cobblers and five spoons. It's been years since I've celebrated a birthday, and it was a great treat for me.

I think summer is ending in a day or two. It's been a good one.

Happy Birthday, Linda! I’m very glad I got to read this blog 😄

Loved reading this Linda, it felt like I was in the room with you for a moment...a very happy belated birthday to you and I hope to see you soon, love to you!

Happy Birthday a day late! It's good to get such a happy report from you. All things seem to be working out very well.