Reflections on the cruise and on traveling with friends

Often when I travel I don't realize what the high points were until I've been talking about the trip after I get home. I've been back for several weeks now, and this is what I've been thinking about.

1. In years past I've been skeptical about cruising. A decade or two ago, I experienced a couple of large-ship cruises and didn't much enjoy the casinos, or the entertainment, or the glitz, or the people everywhere, eating and drinking all the time. Recently I've been on three small ship cruises (to Greenland in 2019, an ocean cruise this summer from Barcelona to Tudbury, UK, and a river cruise last month from Basel, Switzerland to Amsterdam. I like the small ship cruising now and expect I'll do more of it.

2. I will be having my left knee replaced next spring. I went on the cruise anyway. My knee will hurt whether I'm walking around in a city or walking in my yard. I might as well be out there, learning and experiencing new things. I took a cane and a pair of trekking poles. I used the cane on the ship and the trekking poles on the excursions. People were thoughtful and kind to me as they offered a hand as I got off the bus, or held my poles so I could take a picture. The guides respected my slower pace and offered opportunities for me and the group to rest while they talked about the places we were visiting.

3. Wheelchair assist is a fabulous and humanitarian option in airports. There's no charge for an airline employee to take me through security to a gate, or from one gate to another in a big airport like Denver or Munich or Amsterdam or Atlanta, or from a gate through customs. We used elevators rather than walkways or escalators. My travel companion walked alongside me. I always offered to tip my attendant; sometimes they said yes and thank you, and sometimes they said no, tipping wasn't allowed. I had some good conversations with these people who made my airport transit so much more doable.

4. I've done lots of independent travel, but now that I'm older and have less stamina I'm quite content to be part of a group - especially a small group - where the tour company takes care of all the details, including the flight arrangements. I sign up, they tell me how I'm going to get there, I make a change if it's necessary (a six-hour layover deserves a change), I show up at the airport. At the end of the tour, I'm taken to the airport to return home, and I'm picked up at my home airport by a family member.

5. My mother once said, "I like tours where all I have to do is get on the bus and get off the bus." At that time I thought she was a passive traveler, not wanting to get out there and explore. Maybe even a little bit entitled and lazy. Now, though, I'm at the age she was when she said that, I get it. My quote would be, "See #4 above!"

6. I've taken over 90 trips of three days or more since I quit my job in 2010. The vast majority of them were with my husband Art. When a destination looks interesting to me, I always invite him first. For the last few years, though, he's been more of a homebody, so I've traveled with friends. Art is fine with that.

7. I took three trips with a friend who always insisted on separate rooms. That worked fine for short trips to Toronto and Las Vegas, but when we decided to take a cruise to Greenland, I said, "I can't afford to go unless we share a room." She said, "Okay, but I'm pretty sure this will be the last trip we take together." And she was right! Our habits and idiosyncrasies weren't a good match, and the friendship actually cooled after that.

8. I traveled twice with a friend I'd known for several years. Neither trip was a cruise. We traveled well together to Churchill, Manitoba and to New York City. She is a high energy, curious person like me, and we had good adventures, both spontaneous and planned. Laughter is always a good thing - and we still laugh about the futon that broke when she sat on it in our NYC AirBnb.

9. My most recent trip, another cruise, went well also. My friend and I discussed our habits ahead of time: are you a night or a morning person, when do you take a shower, are you tidy or casual in a small room, are we okay to keep individual schedules and join up when we want to? This friend is easygoing, curious and patient. We had a grand time together. 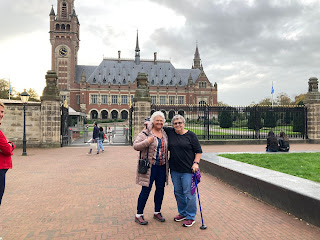 10. This year was the first time I took two cruises within three months of each other. One had been planned for a year, and the other came up closer to the travel date but was too good a deal to pass up. Both were excellent experiences. I'm ready to stay home now for a year or so. By then I'll have a new knee, and hopefully I'll leave my my trekking poles at home.

Hi Linda! Just great advice about traveling with cruising AND with friends. I find value with both. While Thom and I aren't quite ready for lots of cruising, it completely depends upon the location and other choices...and it also depends upon what is happening physically. As far as traveling with friends...well some friends are good to travel with and others not so much. We also learned that unless you are VERY compatible it can really be difficult. Better to figure that out beforehand that to learn the hard way. Thanks for your advice AND for all you other wisdom on a variety of subjects! ~Kathy

I admire your intrepidness. I like the fast-ferry trip across Lake Michigan for 2 1/2 hours. That's about it for me!

I really like small cruise ships too. We avoided cruises for along time and planned our own itineraries to extended trips in Europe, driving rented cars. They were wonderful. Finally we tried Viking River Cruises. Wonderful too. Now I think we are done with extended trips. I get a second new hip in January and my knew will have to be done in the not too distant future. I am very happy that we traveled when we did.
Good post! I saw myself in it.

I think it's great that you can keep up with something you enjoy. I never had much interest in a big cruise, but I think river cruise might be worth looking into.

Never, ever, leave the trekking sticks 😀.
I have a good friend who is ready to travel. I think we may start planning things. Hubby loves his hobbies and home….
Thanks for the advice!