I've read that sitting at computer monitors for hours a day is a health hazard - that human beings were built to stand and to move. So I'm looking for the best workstation addition. Last week I ordered a TaskMate; it's a motorized desktop device that moves my monitor and keyboard up and down. 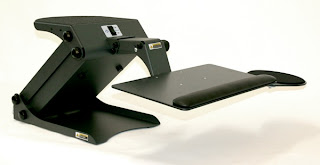 I've got a problem with it because I'm shorter than average, and when I've got the keyboard the way I want it, the monitor is several inches too high in both the sitting and standing positions. So the company rep suggested an articulating arm to give me a more moveable monitor, but that seems kind of complicated. So I did more exploring yesterday and have now ordered a Kangaroo desktop device, where the monitor and the keyboard can be adjusted separately. 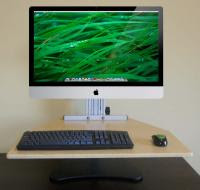 Even with the discomfort of a too-high monitor, I've noticed that when I spend most of my computer time standing up, my back feels better. Initially I resisted the idea of spending money on an "after-market" ergonomic product. But then I thought about how much we travel, and how we like to walk and explore places, and how much I'm paying my chiropractor these days to help with my back when it's troubling me. And I thought in the long run the expense will probably save me money in the long run, as well as allowing me to pursue my personal goals.
The sun has come out, at least partly, for the afternoon. Pretty soon I'll be going outside to cut branches for Art to feed into the chipper. Before I do that I'll stretch - something I didn't use to do.
As a follow-up item, I changed out my blood pressure medication two weeks ago, and the cough and postnasal drip issues I've been dealing with for two years have just about disappeared. Amazing I didn't consider they might be side effects - but I'd been taking lisinopril for three monthe before the symptoms showed up, so I didn't make the connection. So far, the replacement bp med the doc prescribed hasn't kicked in, so I'm tiptoeing around thinking lower-blood-pressure thoughts. I'm very grateful that so far in my late middle age (!) the only prescription I have to take is for blood pressure.
I worked on the annual budget today. This is the first year we'll be living only on Art's retirement income. I can see we're okay for travel this year, but we won't be able to go whole hog like we did last year when I had six paychecks. That will just have to be okay.
Posted by Linda Myers at 12:57 PM

Let us know how that works. I have back problems and I am sure all my computer time doesn't help.
Saw on TV some guy that had set up office computers to run from treadmills. That might be a bit much.

A budget? What's that?

Story Connection - Our Memories Bring Us Together said...

sitting at the computer is ultimately going to do me in. I'm pretty sure of it.

Adjusting to less income is just another one of life's challenges. I have moments of worrying about money, but most of the time I am amazed at just how rich our lives are in retirement. At least we have our priorities figured out.

That's an interesting arrangement, I hope it works out for you. I am on lisinopril, have been for years but don't have the cough. I know many people who couldn't take it for that reason. I'm thinking low pressure thoughts for you, too. I also take a statin, that's it for me at 68.

Well, not really a budget. More like a, "Here's what we spent last year. All other things being equal (which they never are), do we have enough money to do it again this year?"

I'll be curious to see how your new computer gizmo works. So glad about the change in medication and increased health. I hope you enjoyed the sun.

That computer gizmo looks great to me. Hope it works out for you.

Wow, all these gizmos to help us keep our bodies in good order. Yes, as we age, our bodies won't put up with abuses any more.