We've left the dark, rainy Pacific Northwest for 17 days in Arizona. We made a day trip to Houston in November to gather the last of the 20,000 miles we'd need to have our Alaska Airlines MVP status renewed for this year. And we were delighted to be upgraded to first class on our flight to Tucson. An MVP benefit on our first flight of the new year! How cool is that?
We'd made arrangements in Tucson to stay with a couple we contacted through Evergreen Club, an online network whose members are couples over 50 who travel and host other travelers. Nancy and John were most welcoming - we felt right at home immediately. They took us to a favorite restaurant in downtown Tucson where we spent nearly four hours eating and talking. In the morning they fixed us a hot breakfast and we took a walk through their 55+ community. We're now considering renting a place there for a couple of months next winter.
We now prefer Evergreen Club to Couchsurfing. Evergreen has an annual membership cost (about $65, I think), and a $15 nightly cost, per couple, paid to the hosting couple. We've had eight experiences with this group - two as travelers and six as hosts - and generally we find them to have values similar to ours. Couchsurfing, the other online group we belong to, is free to join and free to stay; we've hosted a single professional man and a pair of traveling German grad students, among others. We've only had one negative experience, but it was enough of a negative that we're considering dropping out of this group.
It's a four-hour drive from Tucson to Sedona, where we are now for the next couple of weeks. Here's a picture I took this morning from our bedroom balcony. 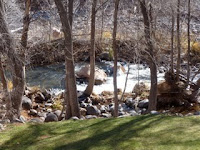 We bought a timeshare at Arroyo Roble Resort five years ago after trading into this resort with a week from another timeshare. We liked the place so much we looked around for an after-market week. You're entitled to use of the resort for seven days a year, but in the months of January and February, you can string together last year's and this year's weeks and get two weeks. Which we've done three times now. It's like living in Sedona for two weeks. We've explored most of the area on previous visits, so this time we'll be mostly walking and reading and hanging out. I love that the sun comes over the rock outside our condo, and that we can hear Oak Creek just outside.
The day we left home, 30 complimentary copies of our book were delivered. We'll be sending some of them to Veterans Administration clinics in Washington and Oregon, suggesting that the counselors read them and perhaps recommend them to the vets they counsel. In Seattle there's a group for vets of each war. We want to reach all vets, but especially those from Viet Nam, and sending a copy to the clinics was suggested by a former clinician who's read the book. Since we're in Sedona and the books are in Washington, I've made arrangements with a friend to ship them to the clinics for me. So here I am, in Sedona, on a sunny day, writing letters to 11 VA clinicians, which I'll attach to an email to my friend. I love how technology helps us. On the other hand, the technology means I stay busy even when sitting in the sun. Oh, well! I can live with that.
Posted by Linda Myers at 2:12 PM

Sounds like you're having a wonderful time. I do hope you enjoy your time in the sun.

Isn't it nice that you can keep up with your life while you're on vacation? You don't have to feel guilty about things piling up while you're gone!

Did you know that one of the best VA hospitals in the nation is in Prescott---not too far from where you are. There is also a large one in Phoenix. You may be able to ...write off... some of this trip :>)

It all sounds wonderful, Linda! Were you staying in Saddlebrooke in Tucson? That's a gorgeous community, but, of course, there are many in Tucson and Sedona is just breathtaking! If you're inclined to come back south either this trip or your next, we're near Florence, about 60 miles south of Phoenix and 70 miles north of Tucson and we have a casita with full bath just waiting for guests! I hope you have a great time in AZ and also much success with your book. I agree that Vietnam vets have a particular need of emotional support. The reception home was so cruel. My brother was a fighter pilot in Vietnam and was demonized -- at least at first -- by his medical school classmates at Stanford in the late Seventies when they found out he was a Vietnam vet.

How wonderful it sounds. Reminds me how nice it was to be in the sun last February when I stayed three weeks with my sister. The circumstances weren't wonderful, but it was so nice to be warm and see the sun. It was terribly cold here during that time. Now, it's warm and rainy, usual January fare. :-)

I am always amazed at the many avenues you take so easily that I have never even heard of. I admire your ability to try new ways.
Enjoy that sun and good luck with the hospitals.

Good for you for donating copies of your book to the VA clinics. I bet they will be helpful to many people.

We're headed to AZ in a few weeks; then taking a place in CA thru airbnb -- a site which I found thru blogging, and I think it might have been from you. Anyway, we don't feel right with Evergreen or Couchsurfing b/c we can't offer our home to anyone -- our bedrooms are still claimed by kids (and full of their junk), even tho' they're no longer here very often.

You are at the center of the universe. A fun area to enjoy, I went to college in Tucson.

Have computer will travel is a wonderful 21st century lifestyle! Enjoy the beautiful AZ weather and the R&R time.

I've stayed along Oak Creek and can picture it as I write this. I wish I was there with you, to wander a bit and bask in the warm sun. Enjoy your interlude, Linda. PS Glad to hear you're healing - we have much to be thankful for in this new year!

Welcome to our home state. It has cooled off the last few days from the upper 70s to a more seasonal mid-upper 60s, but there is plenty of sunshine for you to enjoy.

Sedona is a tremendous place to feel the majesty and beauty that this part of the country has to offer. Two weeks is enough time to slip into a nice, local rhythm while you enjoy the red rocks and the beauty of Oak Creek Canyon.

Have a great time!

You are an adventurous traveler. I don't know if I would be comfortable in either one of your travel clubs. But I do like Tucson and Sedona! Have fun in the sun!
By the way, it's a wonderful thing you are doing with your books!

I'm so glad to hear you made it safe and sound to Sedona, that you're having fun up in the mountains, and that you enjoyed Tucson as well! My sister lives there and we frequent the town; we never fail to have a blast!

Its so great what you're doing with your book, sending to vets to allow them to experience it is such a wonderful idea! :-)

Sedona - beautiful place. Your life sounds very full, but all you sound content. I will have to look up the Evergreen group.

Happy travels and best of luck with the book.

I wonder if I could get a copy of the book. We have an active VA center here and I've thought of what I might be able to do with my experience on a voluntary basis. Please tell me how I should send reimbursement.