I know, I know. We're all of us doing summer together in the northern hemisphere. We're all coping with heat and enjoying gardens and the longer days. Still, it seems unique just to me, and especially sweet this year. Here's why, from just this week.

1. My sister Alyx and her husband Virgil are living in their motorhome in our back yard. They moved here in May from Alaska and will be our "neighbors sharing a plot of land" for several more months. It's been two months now and we're all enjoying the experience. They work nights, so we don't see too much of each other. It may be that when we leave for Arizona for the winter, they'll stay on as caretakers of our place.

Alyx and I sit out together most mornings on "the porch", a couple of folding chairs we've rigged up on our lower deck. She lets out her four cats - they're all old, and they've been indoor cats their entire lives until now - and we chat about her night at work, my plans for the day, and whatever comes up. Both of us are talkers, and I suspect our husbands are relieved the listening doesn't have to come from them so much as usual.

Alyx was 11 when I went off to college, and we were never close until our mother died in 2008. Now we are enjoying each other, and the relationship. It's never too late -- at 58 and 65 we have plenty to say

2. A mother bird has built her nest in our grapes! 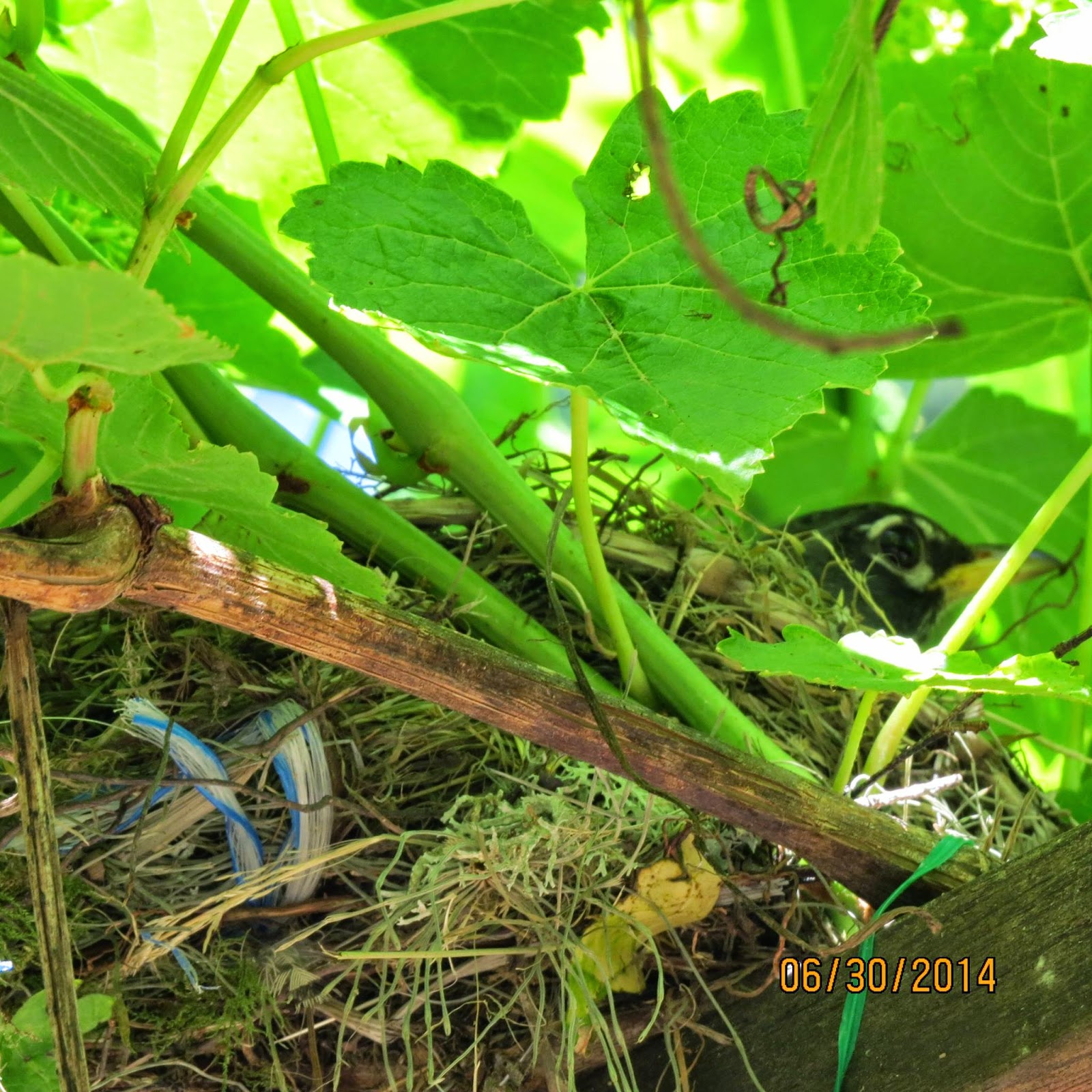 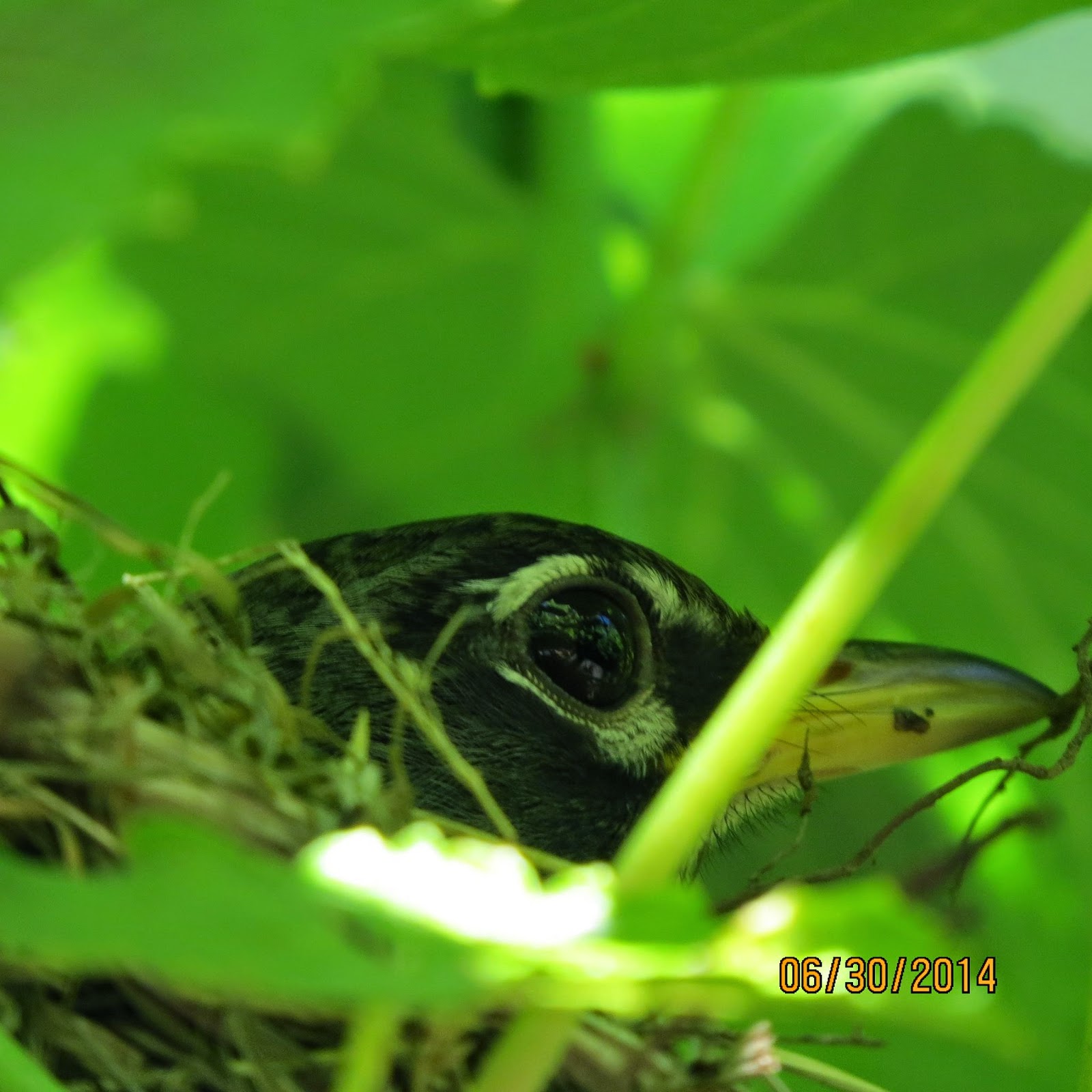 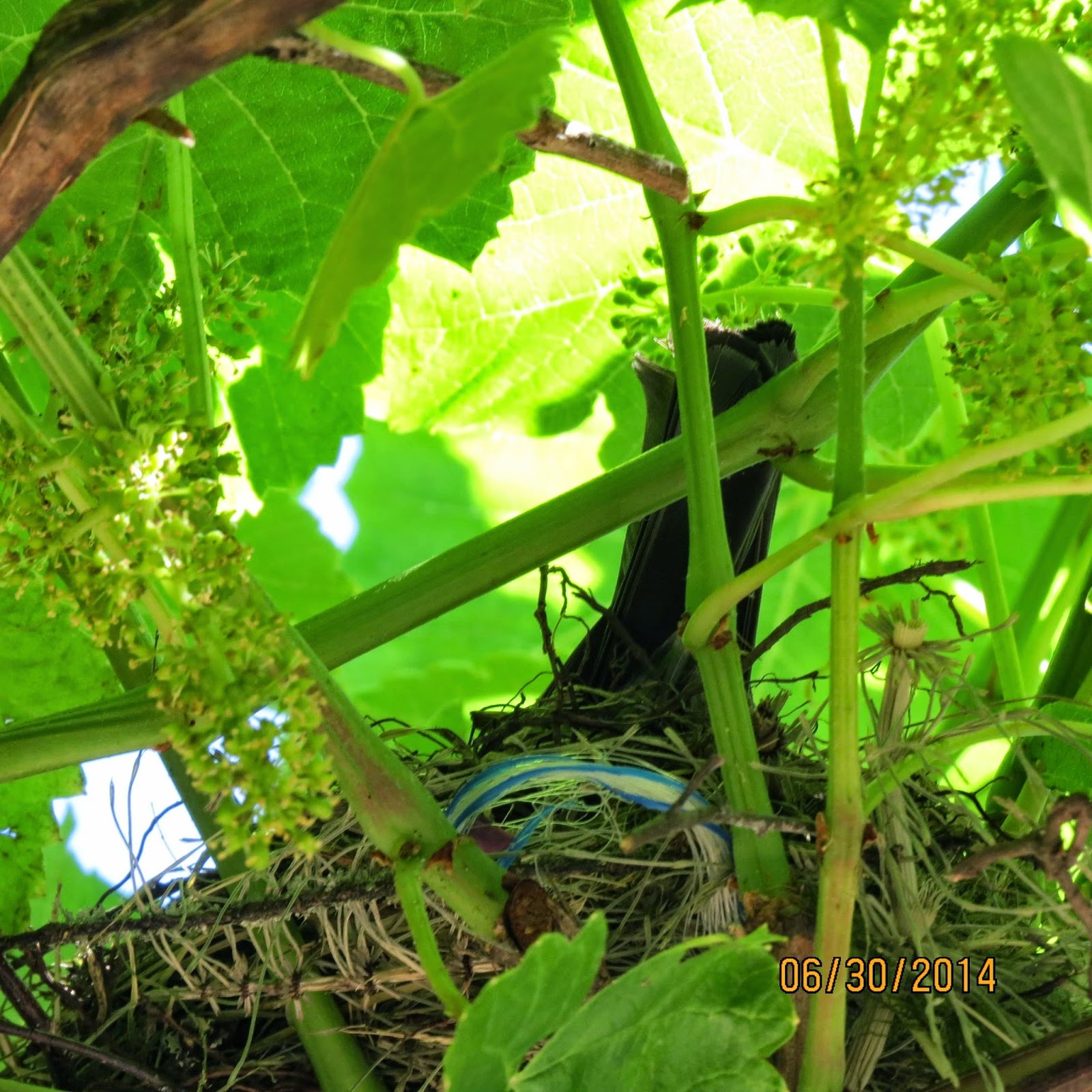 We have a couple of Adirondack chairs just under the grapes, and Alyx and I sit out there and watch the bird as she comes and goes. We think she's a little restless today. Her babies should be hatching in the next couple of days. Our yard is a certified wildlife habitat, but this bird and her nest and her babies are an unexpected delight. I have read that the babies will hop around on the ground for three days before they finally fly. On those days, Alyx will keep her four cats inside the RV and our Larisa will be  confined to the house as well.

3. We have a spectacular garden this year. Art usually tends it, but this year I am doing the watering and watching. And Alyx has never had a garden, so it's all new and thrilling to her. 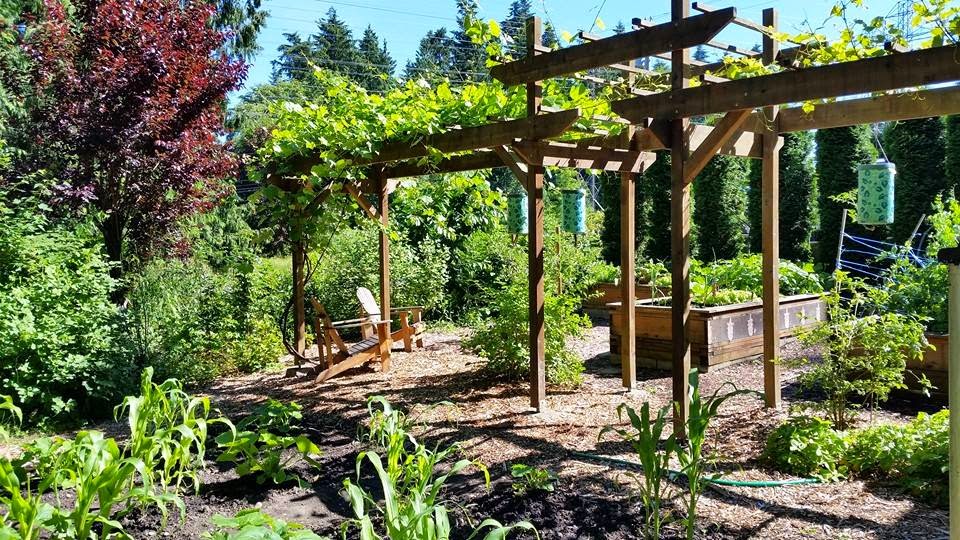 We added a Three Sisters garden this year - corn, beans, and squash. When we're sitting out there it's like we're in another world. These days, we're trying to keep up with eating the lettuce, though some of it has gone to the food bank. The strawberries are all eaten or frozen, the raspberries are finished, and we're working on the blueberries. Green beans will be ready in a few days. Such a treat! It still seems like a miracle to me that we plant seeds and then these plants grow, knowing how to make their own leaves and stems and fruit.

4. I developed a "gardening injury" - a cranky piriformus muscle. It has begun to settle down. I'm grateful that I can walk again without limping. The body's ability to heal itself is a miracle.

5. I have several friends I meet one on one for coffee once a month or so. We sit in Starbucks or a local restaurant and talk for a couple of hours. I love these times with friends. This week I got to see four of them: Carol, Vicki, Colleen, and Sandy. I'm full up by the end of a week like this.

6.  I got some wisdom from my friend Beth. She gave me a great acronym: Don't Even Think About Changing Him! Such a good reminder as I live with a fellow who isn't as compliant as I am about health issues. Humor is a very good thing.

7.  My neighbor Jennie's baby Elsa is nearly eight months old. This week Jen called and asked me to come over and keep Elsa occupied while she packed up some homeschooling materials. I haven't forgotten how to play with a baby. Wonderful! I'm especially honored that Jen trusts me with her friendship and her baby.

8. I bought a 32-ounce decaf iced latte twice this week. Even Jason, my barista, said "You're kidding" when I ordered it from him. I figure it's a great way to stay hydrated! I'll probably go back to my regular size this week. It does seem a little decadent.

9. We're having a heat wave. It was 90 in Seattle today. We're sleeping with the doors and windows open. As I lie beneath a light sheet, I can hear the night sounds of the neighborhood, and the full moon lights the bedroom. I'm aware of all the other sleeping people in all the other houses. It feels good to be part of the community where I live.

10. On my way home from a gathering yesterday (30 women, most of whom I don't know), I was wishing I was better at mingling. Then I saw an older woman walking slowly on a sidewalk, stopping twice. It was hot. She had no water. I turned the car around and went back to her. Alyx was with me, and we stopped the car and gave her a ride to the nearby store. Alyx walked with her until she was sure the woman was okay. I brought up my feeling about wishing I liked mingling. Alyx said, "Linda, none of those women was alone, and none of them needed you. The woman we took to the store was another story. And you were right there."

That's true. I watch out for people around me. I hope I'll remember that the next time I'm feeling awkward at a larger gathering.

Linda, This is a wonderful post. You've created a beautiful life.

I agree with Teresa: you've created yourself a beautiful life. I'll be glad when I can sleep with more than just a light sheet again. It was hot yesterday! :-)

This was filled with little pearls of wisdom, Linda.

This is the most laid back and relaxed post I have read of yours. Usually you are so full of activity and accomplishments. Good to see you enjoying more and doing less.
Isn't it wonderful to have company that brings their own house? To me that is the perfect situation. You can enjoy each other but still have your privacy. Also it will be good to have them house sitting while you are gone.

Linda,...A hobby I got involved in when I moved to SC was "plant identification." Do you know the type of grape vine you have? Is it native to Washington? We have muscadines and "summer grapes" growing wild here abouts.

I love your trellises. The spouse wants to build one over the back patio, but I'm afraid it will make our kitchen/dining room too dark. The shade would be very welcome this time of year, but I hate to cut out the light in the winter.

What a full and rich life you have. And how wonderful to develop a friendship with your sister at this point. I became best friends with my sister--in-law after she divorced my brother and it's been great.

I agree with Arkansas Patti - this is a wonderfully relaxed and happy post, with your ten great positives from just one week. I love your photos of the nesting bird and your lovely and productive garden. Enjoy your summer and your sister's company.

Great that you've reconnected with your sister. But be careful out there in the garden ... it can be a dangerous place (esp. in the heat)!

BEAUTIFUL garden and lovely summer stories..I relaxed into the afternoon, just savoring your tidbits.I also enjoy mingling with different age groups--I hope to be asked to take care of a baby for a few hours ANYTIME!! (No grandkids yet..) and holding a baby,watching a baby smile.. wonders of the world! I also volunteer with Meals on Wheels and see the other end of the age spectrum ,the 80 and 90 yr. olds who look forward to a daily visit as well as a hot meal.. such is the circle of life! Enjoy the rest of you summer...

Love the garden. I'm having to start over here with the move. Looking to do something like yours so I can screen my blueberries.
Been HOT here but its in the 70's and wonderful. Hope you get some of the cool back.
Rose

This was just a great post. It was so good to catch up with you. It must be really nice to have your sis close-by. My sis is twelve years younger than I and just in first grade when I went off to college. Now, we are great friends. I wish she lived closer.

Your garden really is spectacular. I am a bit envious. No place to garden here.

You are great in the friendship. Perhaps you are better in small groups, but you are truly a person one can turn to for advice. I know. I have done so.