I returned home this week from a six-day trip to Santa Cruz, California. My Canadian friend Judy and her husband Ken are staying with their grandson Kaz while his father and stepmother and their two children attend a family wedding in the Philippines. Judy and I always have a good time together, so I accepted her invitation to visit with pleasure and anticipation.

We did have our usual fun, laughing and shopping (Judy is a wonderful shopper, and I am always grateful for her help). But one of my lingering memories is around the stories of two boys.

Kaz is nine years old, with the dark hair and eyes of his Japanese mother and the mischievious smile of his father (Judy's son Kent) and grandfather. Nine-year-old boys are a special treat; they're curious, open to meeting new people, and very willing to share their interests. Right now Kaz is into Minecraft, an online game, and Legos, and working on mastery of a boogie board at the beach. He can sometimes beat his grandfather at chess. He's not a picky eater but he definitely has his gustatory preferences.

On Saturday we all went to Capitola Beach. Kaz spent over an hour working on his boogie board skills. 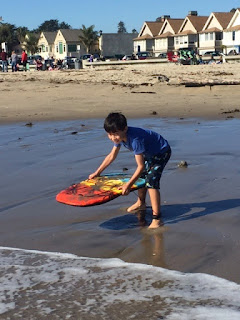 Saturday night we all watched two movies; Kaz and I shared the loveseat, his feet sometimes on my lap. Sunday we played Mexican Train. All in all,  having Kaz around on my visit with Judy was a very special treat. On Tuesday morning, as I stirred in bed before packing to leave for home, I heard Kaz from downstairs. On his way out the door to school, he called out, "Bye, Linda."

On Friday night and the following Monday evening, I had dinner with Aaron. I met Aaron in 1969, when he was nine years old. I was nanny for him and his sisters Nicole and Rebecca for two years. I was a junior and senior at UC Santa Barbara, earning money for a theatre trip to England, and the kids' parents, Marilyn and Joe, were working and going to school. They knew their children needed consistency, and that was my job. I was around for after school and evening. I was the one who fed them dinner, listened to Aaron's jokes and other nine-year-old conversation, hung out while they played games or watched TV, and supervised homework. We went to parks and parades and other outings, sometimes with my boyfriend John, whom I later married. Aaron was a bright, curious kid with a wide streak of gullibility. Two years after I graduated the family moved from Santa Barbara to Santa Cruz.

Aaron and his sisters' mom Marilyn died last January. In her last days, Aaron emailed me to tell me. He said, "You were like a second mother to me, so I thought you should know." Aaron was particularly close to his mother, and as I sat at the table across from him last Monday I could see the pain in his eyes. Aaron is 56 now, and a lawyer, and still bright and curious. It was easy for us to talk as adults. I'm ten years older than Aaron, but the ten years between 56 and 66 are much less than the ten between 9 and 19. Still, we were both aware of our very old connection.

It's easy for me to remember what a nine-year-old boy is like. First there was Aaron, all those years ago. Then there were my two boys, Russell and James, and my two stepsons, Peter and Greg, all now in their thirties. And now there is Kaz.

Nine comes easy for me. I'm lucky that way.
Posted by Linda Myers at 9:11 PM

Such a lovely post, Linda. Both of those boys came alive for me from your writing. Very well done, and I'm grateful I got to meet them both. :-)

You are lucky that way, and so are the boys who have shared your friendship and nurturing. I'm sure things get more complicated somewhere after age 9, but I'm also pretty sure that if they trust you at 9, they'll trust you forever.

Another beautiful break from homework. Thank you Linda.

Sounds like you had some great times in Santa Cruz!

I enjoy your perspective on kids so much Linda! I don't always "get it" so well myself.